When the forecast—financial, that is—looks hazy, investors seek out the sound, sensible advice of one of the most distinguished strategists in the industry. 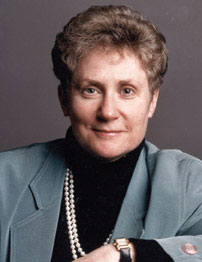 In China they call her the Goddess; in Israel, the High Priestess. And in the United States, she’s been dubbed the Prophet—of Wall Street, that is.

Her real name is Abby Joseph Cohen, and when you meet her, you might wonder what all the hype is about. She dresses in conservative business attire, and her unassuming demeanor exudes a calm and modest certitude. But as chief investment strategist and partner of the preeminent investment-banking firm Goldman Sachs, her word has often been gospel. One of the top-ranking women of more than 20,000 employees, she advises major institutional investors, consults with economic policymakers worldwide and researches and forecasts financial trends.

Nicknames may be flattering and rankings come and go, but it is the rigorous (a word she likes) analysis she applies to the financial markets, coupled with hard work and persistence, that have gotten her where she is today: beyond the glass ceiling. Appropriately, her 47th-floor office is mostly glass, overlooking the Statue of Liberty and New York Harbor.Her real name is Abby Joseph Cohen, and when you meet her, you might wonder what all the hype is about. She dresses in conservative business attire, and her unassuming demeanor exudes a calm and modest certitude. But as chief investment strategist and partner of the preeminent investment-banking firm Goldman Sachs, her word has often been gospel. One of the top-ranking women of more than 20,000 employees, she advises major institutional investors, consults with economic policymakers worldwide and researches and forecasts financial trends.

Working with that view in sight may seem unlikely (“Why do you think my desk faces the other way?”) but her daily routine tells another story. When she is not on the road to Asia and Australia (three to four times a year) or Europe (four or more times a year) or traveling elsewhere in the United States, her days begin at 5 A.M. at her home in Queens, not far from where she was born, and usually end 14 or 15 hours later. Discussing American investments in Israel, changes in Chinese monetary policy in Beijing or the impact of President Bush’s proposals on social security and tax reform are all in a day’s work.

Two New Yorker posters hang on her wall: one depicts the well-known view of Manhattan; the other is Art Spiegelman’s totally black, post-9/11 interpretation of the twin towers. She works a little more than a stone’s throw away from the World Trade Center site.

“The events of that day,” she says, “reminded us all of the fragility of life.”

Her penchant for privacy leads her to talk glowingly and at length about Goldman Sachs, but when asked more intimate questions, she sometimes answers, “I don’t wish to discuss that.” She does share the following: She enjoys photography and reading, especially science-related nonfiction; she exercises with two three-pound barbells, which she keeps in her office drawer; she shoots pool, takes long walks and finds doing laundry relaxing. And her favorite fast food is falafel.

In her work, her appetite is for intensive research and complicated mathematical models. “Once a model is built or analysis completed,” she explains in a 2003 Harvard Business School case study, “I spend an enormous amount of time trying to figure out where I might be wrong. I am always playing devil’s advocate with my own work…. Only once I can convince myself do I feel comfortable with my conclusions.”

Though she has been called a symbol of the bull market, Cohen says, “I don’t know that I ever was. My greatest enthusiasm was for the U.S. economy, which is still the case.” Her style is not to charge in aggressively waving a red flag, but to tread with quiet but self-assured determination.

“Abby is brilliant, understated and as soft-spoken as Mr. Rogers,” says Charley Ellis, a friend, colleague, past chairman of the CFA Institute and chairman of Investors Education, a not-for-profit foundation. “Her modesty is an expression of how rich a personality and strong a character she has; she is neither shaken loose by wonderful events nor by difficulties.”

According to a study by Catalyst, a nonprofit organization that works to advance women in business, 15.7 percent of corporate officers in the Fortune 500 are women, up from 12.5 percent in 2000. Though the numbers are still small, Cohen, 52, is part of that growing trend. What is almost more remarkable about her is that she has not sacrificed her family in the process. “My family is my most important client,” she asserts. “I always made a point to be at school plays or visiting days at camp. Those things go on my business calendar.” Her daughters are now 19 and 23. Nor does she let business intrude on family Friday nights. Her mother lost most of her relatives in the Holocaust, but the positive outcome of a small family is that “we cherish one another. Nothing is so important that it should cause a rupture or division.”

Because she forged her career on the cusp of feminism, she rose without female role models—except for her mother. “She always spoke her mind and was almost always right in her judgments,” Cohen recalls. “She was never afraid to admit an error but never held back in sharing her views.”

Cohen now makes mentoring a priority, both professionally and personally. “She uses her brainpower to be helpful to others,” says Ellis. “She’s the ideal Jewish mother.”

Nevertheless, a 1997 New York Times profile of Cohen that opened by describing her mothering role before her business success disturbs Dr. Anna Fels, a psychiatrist who quotes it in her book,Necessary Dreams: Ambition in Women’s Changing Lives(Pantheon). “The Times had to give all her bona fides as a woman before getting to her accomplishments,” Fels observes. Though the profile was written eight years ago, “integrating a woman’s accomplishments with her femininity is still very hard for the business community,” she says. And despite Cohen’s star power, she wasn’t promoted to partner at Goldman Sachs until 1998.

Cohen’s savvy financial ability is undeniable, but isn’t the average woman still afraid of money? “Not the women I know!” she laughs. She cites studies that conclude women are more intellectually methodical and disciplined than men and are therefore better analysts and financial researchers. Other studies show women are just as knowledgeable but not as confident. “The most important thing is for people to understand enough to know if they need help. Second, they need to study up so they at least know the right questions to ask. It’s amazing to me that people thinking of buying a toaster study Consumer Reports, but if they are contemplating making a major financial decision they are inclined to wing it.”

Cohen showed early mathematical and scientific talent: Her first loves were physics and chemistry. Her parents focused their children on academics; her father was an accountant and her mother worked in finance until she had children. As an undergraduate at Cornell University, Cohen was intrigued by econometrics, the “rigorous” new field that applied scientific and mathematical concepts to economics. She continued her graduate education at George Washington University, got her first job at the Federal Reserve Board in Washington and later held positions at T. Rowe Price and Drexel Burnham Lambert. She has been with Goldman Sachs since 1990.

Because few people were trained in econometrics, it provided a “wonderful entry point” into the work world, says Cohen. But that world was often closed to women. “There were some advantages,” Cohen asserts. “At conferences, there wouldn’t be a line at the ladies’ room.” That has changed: At a recent conference the women in line for the bathroom were “laughing that this was a good problem to have,” she recalls.

At T. Rowe Price, she was denied health insurance for her family: She was told that men were the primary wage earners and only they were entitled to that benefit. Cohen’s husband, David, a labor lawyer, proved the policy was illegal; she eventually got the insurance. “Even if men got used to the idea of a woman working, there was a significant belief that once she had a child she should stop,” adds Cohen.

The corporate culture could still use a dose of empathy for two-career families: “Every male C.E.O. in the country should be required to have a working wife,” Cohen states. “Without working wives, senior men, including C.E.O.’s, don’t understand their employees’ balancing act—not just those faced by the women but also the stresses on the younger generation of men.”

Judaism helps to center her. “Judaism has always been something to be nourished and enjoyed,” says Cohen, who comes from a religiously observant family. A crystal tzedaka box on the windowsill, a gift from a Jewish organization she has raised money for, attests to her commitment to Jewish interests. She and her family actively support Hillel, a cause that dates from her own student days when there was only limited Hillel engagement at Cornell. She recalls breaking a Yom Kippur fast with a cold and soggy tuna sandwich from a vending machine.

Cohen inspires superlatives from Rabbi Ed Rosenthal of Cornell’s Hillel: “She is probably the most genuine, good-hearted, down-to-earth person I’ve ever met. She’s brilliant and important yet she always has time for everybody. She talks to my 10-year-old daughter like [my daughter] was president of the United States.”

In December of last year, Cohen joined the board of the Jewish Theological Seminary. She also serves on the boards of Cornell University and the Weill Cornell Medical School as well as on the investment committee of the Museum of Modern Art in New York. In addition, she has been a frequent guest on Louis Rukeyser’s Wall Street and other financial television programs.

Her success notwithstanding, no one stays at the very top forever. In the rankings of analysts compiled by Institutional Investor, the bible of the investment industry, the last time Cohen placed at the top was in 2001. In 1999-2000, when the stock market was increasingly volatile, she was criticized for “wrong” predictions when her forecasts were below the consensus; blamed for pushing the stock market lower when she advised selling shares and was cautious on technology in March 2000. Some skeptics have called her work “fortune telling.”

“The skeptics are wrong,” she answers bluntly. “I have always stressed my analysis is aimed for a 12- to 18-month time horizon. But few people emphasize that part of the message.”

Today, terrorism and global uncertainty add increasing difficulty to forecasting, but Cohen’s mathematical models help her assess the impact of what’s already happened. Measuring her achievements is a far easier task. She has clearly provided a model of her own making that can point the way for others.