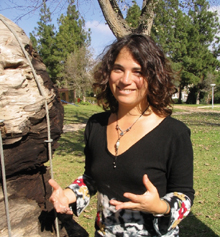 Perched lotus-style in a rattan chair, unassuming jeans-clad Dorit Aharonov, 34, is, says the prestigious science journalNature, “one of four young theorists who are making waves in their chosen fields.” Senior lecturer in the Department of Computer Science and Engineering at the Hebrew University of Jerusalem, she is at the epicenter of scientists who envision a quantum computer that may change the world as extensively as Albert Einstein’s work did a century ago. And she still finds time for Kung Fu.

Q. The 100th anniversary of Einstein’s breakthrough theorems is upon us. Do you see yourself as pursuing the path he blazed?
A. You are asking me a very ambitious question. I would never imagine that I am following the route of Einstein, yet…the area I specialize in…is at the forefront of science because it combines philosophical questions with key scientific ones. Science that leads to sometimes counterintuitive observations or conclusions really bothers every physicist as well as the layman. We want to get right to the bottom of [the] reality.

Q. Can you explain the pre-quantum thinking?
A. Let’s start with computation. People try different ways to perform various tasks as fast as they can. The abacus gave way to navigational tools and eventually to calculators, computers and supercomputers. For a long time, it was believed that all we can do is significantly improve the speed of computer operations but not discover any essentially different kind of computer.

Q. Which leads us to quantum computers. Is this the innovation you are working to develop?
A. Yes, although they don’t yet exist. When they do quantum computers will be based on a different logic, that of quantum physics, which underlies physics and explains everything in the world. The quantum approach is counterintuitive. Many people don’t believe it when they first hear about it. Yet it’s been around for a hundred years and is the only theory that explains many, many things around us including everyday items such as computers, transistors in TV’s and even how MRI’s work.

Q. Can you explain quantum physics?
A. Quantum physics is a mathematical way to describe physical systems—usually you need to use this complicated model when you deal with very small systems like electrons. This mathematical model helps physicists predict the behavior of such systems as well as explain the past—why we see certain outcomes of experiments in the laboratory.

Q. What do you mean by a different type of logic?
A. Physicist Richard Feynman liked to demonstrate the peculiar things in quantum mechanics with the following classic experiment. Imagine a wall in the middle of a pool with two long vertical slits in [it], approximately at the height of the water level. You generate waves on the water on one side of the wall, and…the waves come through both slits. Everyone knows that if the wave that comes through one slit is very high and the wave that comes through the other is very low, they cancel each other out. Quantum mechanics comes into play when we [apply this model to] extremely small particles like electrons. The ways in which we describe how these particles move through the slits, and that they counter each other [like the waves do], is the main principle of quantum mechanics. This is very difficult to understand because it [says] that matter can pass through two places simultaneously. This quantum principle provides the only credible explanation for many experiments.

Q. How do we go from slits in walls to quantum computers?
A. It was Feynman who also first thought of relating all this to computers. Imagine a computer that can be in a “super position” of [processing] all its possible computations at the very same time. So-called multiprocessing is just that—simply many processes happening alongside one another. They don’t really speak…or interact with each other and there can’t be too many of them at the end of the day.

But in a quantum system, if you begin with 100 particles, they can grow through super positions into a number that exceeds those contained in the entire universe. A very small computer would deliver exponential reach with many, many possibilities explored at the same time. If we can be smart enough and design it carefully enough, you could achieve a similar effect to the waves canceling each other through the wall’s slits, with bad computations and wrong answers canceling each other out, leaving only the right answer.

Q. How much of this is hypothetical and how much is rooted in reality?
A. Laboratories throughout the world are trying their best to build this quantum computer. Every new approach has its own problems. Ultimately, there will be huge applications for such devices in health care technology, in Internet and banking security, in chemistry, in physics, perhaps in biology. One day, if this works, we will unleash tremendous power, but we’re still in the early stages. I think that in a few decades we might see quantum computers. Yet an even more interesting outcome of this global enterprise would be to conclude that one can’t do anything with quantum computers because we will have discovered new laws of physics along the way that say we cannot do this.

Q. Why is Israel at the center of physics in the 21st century?
A. I don’t know how much at the center we are, but it is true that in certain areas Israelis play more than their relative share of what is happening. This probably has to do with the classic Israeli characteristics of initiative and chutzpa, which are really quite helpful when you are doing science.

You have no fear. You just go directly to the right places, and these are not the places you might have gotten to by playing by all the rules.

Q. Does Jewish tradition figure into this particular mix?
A. I would say so. There is a strong tradition in Judaism that has a healthy respect for investigation and intellectual curiosity and not accepting immediate, superficial answers to complex questions. The concept that a question can be even more important than an answer seems important to Judaism, and I think it is no less important in the exploration of science.

Q. Harvard President Lawrence H. Summers recently ignited a firestorm when he said that women might not be naturally predisposed to go into math and sciences. I guess he doesn’t know you?
A. I have never felt that being a woman would prevent me from doing what I wanted to and loved doing. I have women colleagues and don’t think there is anything especially exceptional about women doing great science. Still, there are fewer women in science today than men. As I entered the field, I felt slightly uncomfortable and wondered whether I myself had prejudices about women and science going together. Was it feminine? Would I have to be very rough and forceful? When I was younger, there was a little friction, which I attributed to having been fed some prejudice. But once I cleaned that out, I had no more doubts. In fact, my sister is a geophysicist and only my brother is not yet interested in pursuing the sciences.

Q. Do you accept some generalizations about gender differences?
A. It may not be politically correct, but statistically there are differences between different parts of the population in many things. But this should never matter in terms of how one treats any individual. Statistical differences regarding large groups do not matter when you ask if this black person or this white person jogs better.

Q. You’re sitting in a yoga position. Are you a big yoga devotee?
A. I am more into Kung Fu now. I love the physical discipline that accompanies the mental. For me, it is just a route to mental activity that leads to greater concentration and internal quiet and wider vision. It’s also like being a kid again. As we get older, we get stuck on one direction… This way, for five to ten hours each week, I am able to practice all my abilities.