Commentary: He Hides, We Seek 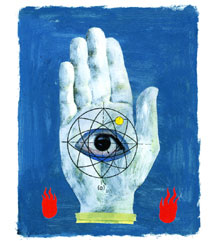 President Bush thinks it is appropriate to teach public school students about the scientific problems with neo-Darwinian evolution, the theory that natural selection operating on random genetic mutation fully explains the development of complex life. In the weeks after the president said this, the scientific critique of Darwinism called “intelligent design” came under attack. Proponents of ID argue for teaching about the controversy surrounding Darwinism, but Darwinists respond that there is no genuine controversy for Darwin has unambiguously vanquished design. Which side will triumph? If the Talmud’s insights have validity, probably neither.

Darwinism seeks to explain the development of biological organisms by means of purely materialistic natural selection. Intelligent design, which is emphatically not identical with literal biblical creationism, points out the gaps in material explanations for evolution, inferring from this observation a transcendent designer. For example, the micro-machinery inside every cell in your body seems, in this analysis, to bear every hallmark not of natural but rather of conscious selection.

One may doubt that science will ever be able to show either that materialistic processes are enough to explain life, or that they are not. A century and a half before Charles Darwin, the philosopher G.W. Leibniz (1646-1716) argued that our free will as human beings requires a certain ambiguity in God’s Self-presentation. If it could unambiguously be shown either that God exists or that He does not, this would cripple our spiritual freedom. It is only because He veils Himself in ambiguity that our struggle to be good or live a worthwhile life has meaning.

Fifteen centuries before Leibniz, in the unique cryptic style of the Talmud, a Jewish sage taught the same thing. Rabbi Yose cites a fragment of a verse from Psalms, “the wind, the storm does its bidding” (148:8). This means, he says, that “the wind stands upon the storm” (Hagiga 12b).

A classical commentator on the Talmud, Maharsha (1555-1632), clarifies that in mystical language “storm” alludes to man’s evil inclination, which separates us from God. The “wind” denotes the free human will. As the Zohar further teaches, in the darkness of this “storm” of perverse human desire, God hides His light from us. When Rabbi Yose said “the wind stands upon the storm,” he meant that our moral free choice (wind) depends on God’s hiding Himself (storm).

Today, the storm manifests itself in Darwinism and its insistence that material causes explain everything. Intelligent design wishes to show a designer’s hand at work in the origin of species. If the Talmud is right, however, ID can never fully overturn materialism. If God prefers to remain veiled, no one can uncover Him.

Yet Judaism assures us that the veil not only hides but also, however dimly, reveals. It must do both, for as the Talmud promises, “Everything is in the hands of Heaven except the awe of Heaven” (Berakhot 33b). In the Talmud’s view, which of course assumes an intelligent designer, the intellectual triumph of Darwinian materialism, which leaves no room for a creator, is an impossibility because that would deprive us of a relationship with God. The Lord will always preserve our freedom to stand in awe of Him, or to refuse to do so. This is the nature of reality.

So the debate must go on. If President Bush and others suggest that students may legitimately be made aware that the argument between Darwin and design has two sides, they are only saying it’s right to acquaint young people with reality. And who can argue with that?