Family Matters: Voting With All Your Heart 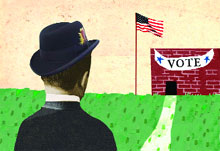 Today, we dress down to vote or don’t vote at all. But once election day was a holiday, a time for suits and dress shoes and showing pride in your country.

Each year, as the leaves begin to turn and the first chill winds of autumn are felt, the airwaves begin to buzz with news of upcoming election campaigns and newscasts are dominated by discussions of choices to be made on the first Tuesday in November. Again and again we are reminded of the great privilege of democracy: We are urged to go to the polls and fulfill our obligation as citizens of the United States. Inevitably, when I listen to all these messages, I think of my father, for whom voting was more than a privilege and an obligation—for him it was a sacred act. It is then that I recall my father’s adventure on Election Day 1944, when war still raged in the world and Franklin Delano Roosevelt was running for his 4th term as president.

My father was born in the Polish village of Partsevah, a small enclave that survived World War II, although its small community of Jews did not. In his early twenties, spurred by his family’s vulnerability in an era of Polish autocracy that imposed strictures on the educational and economic opportunities of Jews, limited their civil rights and indeed threatened their very lives, my father left his home to seek a new destiny in America.

He never spoke of his journey across Europe except to recall that for all the long months of his solitary odyssey he ate nothing but vegetables and hard-boiled eggs, so fearful was he of violating the rules of kashrut. Profoundly religious, a talmudic scholar by training, he scrupulously observed Shabbat and the mitzvot even in the most arduous of circumstances—in alien cities, amid people whose languages he could not understand and whose ways were foreign and, in all probability, frightening to him.

When he finally reached the United States he was overwhelmed with joy. This new land was a haven to be cherished, the concept of a government of the people, by the people and for the people an ideal to be revered. His framed citizenship papers occupied a place of honor in the small room where he studied Talmud each Shabbat. An American flag was displayed on holidays and he listened to President Roosevelt’s fireside chats on our large Stromberg Carlson radio with the same absorption he accorded to a learned discourse on the Torah. His adopted country had his unquestioned allegiance and his gratitude, intensifying during the dark years of World War II.

A self-made man who had established a respected fur business on East Broadway in New York, my father worked long hours. He opened his store himself each morning, leaving our Brooklyn home at a predawn hour, and he returned each night well after 10 o’clock. He was open for business every week of the year, Sunday through Friday. There was only one exception to this schedule. Each year, on the first Tuesday in November, he arrived home in the early afternoon. Voting was not a simple act for him. It was a ritual, requiring careful preparation, not unlike his preparations for the celebration of Shabbat.

Always he showered when he arrived home and then changed to the clothing my mother had laid out for him—clean undergarments, a snow-white shirt worn with his gold cufflinks, the good suit he usually wore to synagogue on the holidays and his best tie.

We lived in a two-family house on a tree-lined street. My maternal grandparents occupied the ground-level apartment. My grandfather took great pride in polishing the household’s shoes each Friday, but on the morning of Election Day he took special pains with my father’s dress shoes, shining them to a high gloss. He also carefully brushed my father’s best hat and his own black Homburg.

Like my father, my mother and her parents also dressed with care for the expedition to the polls. My grandmother twisted her luxuriant long white hair, usually worn in a bun, into an elaborate chignon and crowned it with a black hat trimmed with bright-red plastic cherries that bobbed up and down as she walked. She pinned a cameo, usually reserved for weddings, to the jacket of her black suit. My grandfather combed his silver Van Dyck beard, selected a stiffly starched shirt and his newest wide silk tie. He wore the high black yarmulke he favored and placed his hat over it.

My mother, who seldom wore makeup, took time to apply lipstick (I remember still that she did it without the benefit of a mirror) and slipped on a pair of high-heeled pumps. Pleased with themselves, they peered into the long hall mirror and set out for the two-block walk to P.S. 209, on the corner of Coney Island Avenue and Avenue Z, which was our neighborhood polling-place. I trailed after them, proud of their elegance, proud that they were going to vote, hopeful that my teachers would see them in their finery and applaud their patriotism.

The presidential election of 1944 was of particular importance to my family. Franklin Delano Roosevelt was our hero. His picture hung in my grandparents’ dinette, and like many Jews of that more innocent time, we considered him to be a special champion of our people.

My grandfather often repeated the familiar quip that Jews had three worlds—dus velt (this world), yenne velt (the world to come) and Roosevelt. On the 6th day of June, five months before election, D-day ignited our hopes for an imminent German defeat. We knew this operation had been accomplished in no small part due to our president. Reports of the desperate situation of the Jews of Europe had reached us. There had been long nights of silence punctuated by the flickering flames of Yohrtzeit candles when my parents learned of the fate of friends and relatives left behind in Poland.

If Hitler was our haman, F.D.R. was our unlikely Mordecai and his wife, Eleanor—whom we loved equally for her humanity, her protruding teeth and her reassuring “My Day” column—was an even more unlikely Queen Esther. But the war still raged fiercely in the Pacific theater, and we could not imagine how Japan would be defeated unless Roosevelt was reelected. My parents and grandparents made their way down Avenue Z to make certain that our president would lead us to victory in the world’s greatest historical battle between good and evil.

I ran ahead of them to open the side door of the school, full of my own importance. I wanted to show them the poem I had written about the Stars and Stripes, which was taped to the bulletin board just beneath the great American flag in the gymnasium, where the voting booths had been set up.

A police officer with a florid face, his shield glittering with authority, stood next to the flag and watched as voters filed in to register. He was a pleasant-looking man, and he nodded respectfully to my English teacher, thin Mrs. Cunningham, who had worn only black since the day her only son had been killed at Anzio. She noticed me and smiled.

“This is the little girl who wrote the poem about the flag, Pat,” she told the police officer. He smiled at me and I think it was then that he noticed my father and my grandfather, who had taken their places on line and were preparing to sign the registration ledger.

“Gentlemen,” he said, “you’ll have to remove your hats.”

My father looked at him in bewilderment.

“Why should I remove my hat?” he asked.

He looked at Mrs. Cunningham, as though for corroboration, and she nodded her head in agreement.

My father’s face became flushed. His eyes grew dangerously bright behind his thick glasses. He was not tall, and he craned his neck to look up at the officer. He was a reticent man, but when he spoke his voice was firm, with conviction.

“I wear my hat because I am a Jew. I cover my head to show respect to God,” he said in his heavily accented English.

“Dave, please.” My mother placed a restraining hand lightly on his arm, but he shook it off impatiently.

My grandmother trembled. The plastic cherries on her hat bobbed up and down. Uniforms frightened her. She was, after all, a child of Poland, a woman who had been intimidated by border guards and immigration officers who wore jackets adorned with emblems and badges. She cowered behind the door when the meter reader from Con Ed arrived. How much more threatening was a police officer with a gun in his holster and handcuffs looped about his wide leather belt. She looked pleadingly at my grandfather but he ignored her.

My mother, whose English was flawless, turned to the officer. “My husband is a religious man. He traveled for more than a year from Europe to reach this country and never once did he break the laws of our religion. He ate only vegetables and hard-boiled eggs. He cannot do otherwise.”

My father nodded. He smiled as he sometimes did when he played chess with an opponent who had just made a crucial but unwise move.

“It is because I am an American that I do not have to take off my hat,” he explained. “This is a free country.”

Now it was he who turned to Mrs. Cunningham for corroboration and again she nodded.

“The flag tells us that we are free,” he continued. “In a free country a Jew can wear his hat. That shows respect to the flag of freedom. And now I sign the book. And now I vote.”

He and my mother approached the long extension table where, with his own Parker fountain pen, newly filled with bright blue ink that morning, he laboriously signed his name.

The officer stared at him, as though considering the validity of his response, and then, ruefully, he smiled. So did Mrs. Cunningham.

My mother, my grandmother and my grandfather stepped forward and they too signed the registry, their faces bright with pride. One by one they disappeared into the mysterious curtained recesses of the voting booths. I heard the click of the levers as they cast their votes, that magical and reassuring sound of democracy in action. I watched as my father, who always took an inordinately long time in the booth, exited and held his hand out to the police officer, who shook it vigorously. I was sorry that Mrs. Cunningham had left and did not witness this odd and wonderful reconciliation.

Each year, as I wait in line for my turn to vote, more often than not in a faded sweatsuit, I look up at the American flag in my suburban polling place and I think of my father and the policeman called Pat and Mrs. Cunningham.

It is then that I wonder what happened to my grandmother’s hat with its brave red cherries and I regret that I did not dress with more care for this solemn and important occasion. But never do I miss an election. My father’s legacy remains intact.