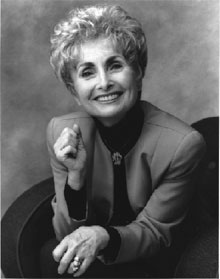 A survivor of Bergen-Belsen, Hungarian-born Rebbetzin Esther Jungreis is today one of the highest profile speakers on the world Jewish-inspirational circuit. She is founder and president of Hineni (www.hineni.org), the back-to-Jewishness movement, with centers in New York and Israel. Author of three books, the Rebbetzin, as she signs her columns, issues this clarion call: Empower yourself through knowledge, come home to Judaism.

Q. American Jewry: Is the glass half full or half empty?
A. American Jewry is…waiting to be awakened, inspired. I have spoken throughout the United States these past 40 years. Thousands of people come to listen, and so many are apathetic…. Not because they want to be, but because no one has managed to touch them. Once awakened, they are the most amazing people, so open to being inspired. The essence of America is the lack of hidden agendas, just good people. The cynicism and the nastiness in much of the rest of the world does not exist in America.

Q. Do you find a staggering lack of knowledge?
A. The only problem with this community is that it is Jewishly ignorant, Jewishly illiterate. We have expertise in every field, except in Judaism. Yet I hear from more and more people who never thought about their faith…. They are discovering that they want to come back to it. It is very easy to reach out, but you have to touch their hearts. The problem is that most Jewish community leaders appeal only to the pocketbooks of American Jews. That is where we have missed the call. My thirst is for the neshama [soul]….

Q. Is there a special role for American Jewish women?
A. To become a Jewish woman again, that is the most important thing. One need aspire to nothing better than that. Throughout history it has always been the women who kept our nation alive. It was Sarah about whom God said to Abraham: “Listen to your wife, listen to her voice.” It was Miriam who urged her father to remarry and have children. At the Nuremberg Trials all those brave Nazi officers claimed they were just following orders, yet two little ladies in ancient Egypt defied Pharaoh and his empire and the Egyptian army. They believed in God more than they believed in Pharaoh.

Q. Women, then, are the anchors of Jewish survival?
A. If you want to have Jewish homes, Jewish lives, Jewish children, then we have to have Jewish women because it all depends on us. We can inspire our men, we can inspire our children and we can inspire the world. A man doesn’t know how to enter the heart—they can enter the minds, but a woman can enter the heart… It is vitally important for women to study, to become knowledgeable. I teach a Torah class. Every week we have hundreds of women coming. It is so exciting to see this new generation of women as they bring their husbands and children along, changing the world and the future.

Q. What about Jewish women as activists?
A. Traditionally, Jewish women have always been activists. Regarding Mother Sarah, the Torah states that she was an equal partner to our Father Abraham in his work. We have ample examples throughout the centuries of women in the workplace who assumed the responsibility of supporting their families… Just consider all the many observant women who have become breadwinners and are in professions. What we must remember, however, is that our women have always regarded their work outside of the home as secondary to raising their children. Children were always the priority and, unfortunately, that is something that many contemporary women have lost sight of. Nowadays, many women feel a compulsion to escape their homes, leaving child rearing to hired help.

Q. Beside teaching and lecturing, you are appearing in photos next to President Bush, addressing national political conventions and so on. A new chapter in your life?
A. This is nothing new. The president invited me to give a benediction to the Republican convention in 2004… I knew that if God gave me this opportunity to speak with 35,000 people in Madison Square Garden and to all of America via TV, then I had to say something to sanctify the name of God. And to say something on behalf of Israel, my people. I explained how American values emanate from the Torah. I wanted all America to know and understand the values the Jewish people represent… The Bible is not a universal book created by all mankind, but a gift for all mankind that the Jewish people gave to the world. I quoted psalms in Hebrew and then I [spoke] about my people and the land of Israel. That morning there had been a terrorist attack in Beersheva and I asked everyone to pray… It was awesome. This was clearly a testament to the goodness of [Americans] who really love Israel…

Q. What kind of feedback did you receive?
A. I received thousands of e-mails from non-Jews: Keep up your holy work. The next day I received a phone call from the Republican leadership, and they told me that the president was deeply moved by my words and he asked me to be present at his acceptance speech. I was given a seat of honor next to him and it was just amazing… When we have respect for our commandments, then the world has enormous respect for us.

Q. To what do you attribute your unceasing drive that caused some to liken you to a female Jewish Billy Graham?
A. I am not a youngster anymore. Where do I get my energy from? Only from the love I have for my people. I get three hours of sleep at night, but you know what, Hashem gives me the energy to keep going and speaking… That is why I travel the world. I just came back from South America. I spoke in Panama, in Venezuela and in Mexico. My book (The Committed Life/HarperCollins) came out in Spanish. Now I get phone calls every Friday afternoon from Panama and Venezuela from people my message touched. We are truly one nation.

Q. What about today’s young Jews who are getting married later and later or marrying out or not marrying at all?
A. [This is] the biggest plague in the Jewish community. There are countless single people who are so anxious to get married, yet cannot. There are many reasons. Years ago single people lived at home until they got married. Mommy and daddy kept pushing, networking… Today, you finish high school and are off to college. You never come home, you’re on your own. In college you experience many relationships, many of which leave scars on the neshama. Too many people there have too many intimate relationships. But…physical intimacy must be a spiritual experience. So you have singles, not rooted in their family home, scarred by experiences, looking for a job, finding an apartment. All typically followed by years of new relationships, leaving more scars. Marriage grows more distant and confusion sets in. When you think you meet a special person, you are not confident or sure if he or she is the one. So it’s, ‘first let’s live together.’ That way goes sour because if you don’t consummate your romance and courtship with marriage, consummating it rather with a physical relationship devoid of marriage, it cannot last. This type of lifestyle is very painful, and it has created havoc and tragedy. It has left many people miserable and spiritually, emotionally crippled.