Letter from Jerusalem I: Options Seen Through Smoke 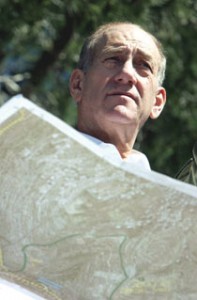 This summer’s two-front fighting is forcing the Israeli government to reexamine its priorities before moving ahead with further unilateral disengagement.

It was an average day when rockets were falling on Haifa, Israeli soldiers were fighting to take a Hezbollah stronghold in southern Lebanon and less-noticed skirmishes against Palestinian militants with rockets continued in Gaza. Prime Minister Ehud Olmert had visited an Air Force base in southern Israel—and then dropped by Nitzan, the instant town of mobile homes on the coast near Ashkelon where many former Gaza settlers have lived since last year’s evacuation.

Sitting in the cockpit of a jet made an easy photo-op for a leader eager to show military resolve. But politically, the Nitzan visit was the Daniel-in-the-lion’s den move, the real sign of determination. Evacuated settlers are not fans of the architect of unilateral withdrawal. Olmert was one of the key advocates of the pullout from Gaza—and was elected prime minister last spring, as Ariel Sharon’s heir, on the promise to withdraw from much of the West Bank. Olmert’s plan for hitkansut—usually called convergence but better translated as contraction—would mean evacuating up to a third of the quarter-million settlers.

Nor did he soften his stance for the audience at Nitzan. Had the Gaza settlements remained, he argued, the Israeli Army would not have been able to act as freely against the Palestinian groups firing Kassam rockets into Israel. “It is important to me for you to know the truth,” Olmert went on. “There will be further evacuations.”

So from Olmert’s perspective, the battles in Lebanon and Gaza were no reason to change his signature policy plan. But the unexpected two-front conflict has changed the political environment inside Israel and in the Middle East. In deciding whether and how to move ahead, Olmert faces a new set of options, each with its own difficulties.

Olmert shocked israel when he came out for unilateral disengagement nearly three years ago. He was a lifelong rightist, an advocate of holding all the land Israel had conquered in the Six-Day War. But statistics showed that the number of Arabs living between the Mediterranean Sea and the Jordan River was approaching the number of Jews. Olmert concluded that the Palestinians in the West Bank and Gaza Strip could soon stop seeking their own state and instead demand the right to vote. Unless Israel ceded land, it would become a binational state.

On the other hand, he wanted to hold on to the largest West Bank settlements and didn’t expect to reach a peace deal with the Palestinians. So Olmert, then deputy prime minister, proposed that Israel draw its own borders and pull out of land it did not want. Soon after, Sharon announced his plan for disengagement from Gaza.

From the start, critics challenged the wisdom of unilateral withdrawal. Those on the right said terror groups would turn Gaza into “Hamastan.” Those on the left added that unilateralism would undermine Palestinian moderates who were willing to negotiate and harm the chances of creating a stable Palestinian state at peace with Israel.

But the unilateral approach appealed to the center. The Gaza disengagement went ahead and the long stalemate in Israeli politics was broken. After Sharon’s debilitating stroke in January, Olmert led the new Kadima Party into the March elections on the explicit platform of redrawing borders and dismantling settlements. Though Kadima only won 29 of the Knesset’s 120 seats, a total of at least 70 seats went to parties that favored giving up land.

Since then, though, support has weakened for unilateralism. In May, the monthly Peace Index survey—a project of Tel Aviv University’s Tami Steinmetz Center for Peace Research—showed that the Israeli public favored Olmert’s West Bank pullout plan by a plurality of 47 to 44 percent. In early July, support was down to just 39 percent, with 47 percent opposed. By that time, gunmen in Gaza had abducted 19-year-old Corporal Gilad Shalit from inside Israel and Israeli troops were back in the territories.

And just days after the July poll was taken, Hezbollah carried out its copycat abduction of two soldiers, sparking the military confrontation in Lebanon—from which the Israeli Army had withdrawn unilaterally in 2000. Critics of unilateralism rushed to say, I told you so, and pundits who’d trumpeted the approach now asked what strategies should replace it. Here are some of Olmert’s options:

Postpone convergence. If the fighting smolders on in Gaza, Lebanon or both, this could look like the convenient choice. It would be easy to say the world has changed since the election and drop withdrawal from the agenda.

Except that the problem won’t vanish. Olmert’s original argument for withdrawal remains: Israel cannot rule over a large Palestinian population and remain both a democracy and a Jewish state. Meanwhile, the number of settlers continues to rise. Delaying withdrawal means it will be even more difficult later.

Stick to the program. Judging from Olmert’s appearance at Nitzan, this is what he intends. Removing settlers, he has already argued, makes it easier for the Army to act against hostile forces. He will also argue that this summer’s military campaigns have reestablished Israeli deterrence, demonstrating that once Israel has withdrawn, it is willing and able to use force against anyone who attacks it, so that pulling out in the West Bank is now safer.

Politically, this will be a tough sell. Watching the missiles from Gaza and Lebanon, Israelis easily make the calculation that Tel Aviv and Jerusalem would be within rocket range from the West Bank. For pulling out to be safe, there would have to be a Palestinian government in place committed to preventing attacks on Israel—and able to enforce that policy.

Leave the army there. An alternative would be evacuating settlements but not the military beyond the security fence. No longer would Israelis and Palestinians be living next to each other. Freed of protecting settlers, the Israeli Army would presumably have less reason to interfere in the daily lives of Palestinians.

What remains, though, would still be a military occupation. Violent opposition to the occupation and to the de facto annexation of the settlements on the Israeli side of the fence would continue. In effect, Israel would pay the most painful price of withdrawal—a bitter confrontation with the settlers and the need to give them new homes— but it would get very little in return.

Long-term ceasefire. An unexpected result of this summer’s military action could be to resuscitate Middle East diplomacy. A military offensive is the ultimate unilateral action. Yet even the strongest advocates of the Lebanese offensive acknowledged that Hezbollah could only be weakened, not eradicated, by force. At the least, defanging the Shiite militia would require another military force to take control of southern Lebanon.

The need to arrange a ceasefire has set off a diplomatic process involving the United States, Europe and Arab countries, along with Israel. The big question was whether Syria would be brought in: Since Damascus uses Hezbollah as a proxy, disarming the group would be difficult without Syria’s consent. And getting Syria’s consent might mean discussing the future of the Golan Heights as well. What began with unilateralism led to multilateralism.

Likewise, the Gaza crisis sparked diplomacy that included mediation by Egypt and Jordan. A deal that would bring Shalit home and firmly stop rocket fire from Gaza appeared likely to include the Palestinian Authority’s prime minister, Ismail Haniyeh of Hamas.

Potentially, say some Israeli experts on Middle East politics, those contacts could open the door to new negotiations on an Israeli pullback. They could include Jordan and Egypt, since both have a strong interest in ending the Israeli-Palestinian conflict.

One approach to post-crisis talks is to seek a long-term ceasefire, short of full peace. “There are people in both Hamas and Fatah”—Fatah is PA President Mahmoud Abbas’s political base—“who understand that we’re not about to read ‘End of Conflict’ tomorrow and to solve the problem of Jerusalem or the refugees or all sorts of other issues,” says Yoram Meital, chairman of the Chaim Herzog Center for Middle East Studies and Diplomacy at Ben-Gurion University. “What we need is mainly stability for some years for reconstruction on both [sides].”

Advocates say such a plan would be easier for everyone because it would indefinitely postpone dealing with issues that foiled the Oslo process. The agreement would presumably give the Palestinians an independent state with enough legitimacy to control its territory and stop attacks on Israel. The West Bank withdrawal could safely go ahead. But to reach an agreement, Israel would almost certainly need to give up more land than Olmert had planned.

Yet the Oslo process, beginning in 1993, was also based on the idea of leaving the big issues for last—arguably, that was its fatal flaw. Instead of building trust, postponing important questions fed the resentments between Israelis and Palestinians. The result was a return to violence.

Negotiate peace. The other alternative is to seek a full peace agreement, putting all the hard issues on the table. That could happen, for instance, under a Palestinian plan for national unity known as the Prisoners’ Document. It gives Abbas the mandate to negotiate on condition that the final accord would be put to a referendum. The plan aims at allowing Hamas to live with Palestinian concessions, without offering them itself.

For Israelis, a full peace agreement approved by the Palestinian public could make it easier to give up territory. Still, after the last intifada and this summer’s violence, building public trust on both sides would be difficult.

For Olmert, though, such negotiations would mean reinventing himself politically for a second time. The first time, he proposed drawing new borders for Israel in which Jews are a majority. To salvage that idea, he would now need to sacrifice unilateralism. Any agreement with the Palestinians would necessarily include concessions he sought to avoid. Israel’s final borders would likely be much closer to the pre-1967 Green Line than he wanted.

The outcome of the summer’s fighting and diplomacy will affect which option the government takes. But ultimately, the prime minister will need to make very hard choices. Even meeting the former Gaza settlers at Nitzan will look easy in comparison.