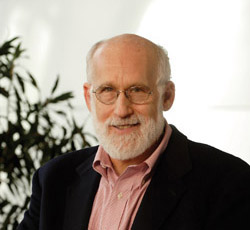 Equal doses of medical science and profound empathy inform this world-renowned physician’s care of his patients and his best-selling writing of their illnesses.

When he is not in his laboratory at Boston’s Beth Israel Deaconess Medical Center, where he is chief of experimental medicine, he focuses his expertise as a hematologist and oncologist as well as his compassion on the inner workings of his patients. It is this unusual nexus of medicine, healing and faith in the preciousness of life that characterizes Dr. Groopman’s career and core being. Eleven years ago, at age 44, Dr. Groopman turned his gentle yet meticulous lens to writing about his patients’ courage, endurance and resilience.

Though he considers himself a scientist and physician first, his eloquent pen captures the pace and pathos of medical mysteries and human dramas. The Measure of Our Days (Penguin) was published to critical acclaim and inspired the ABC television drama Gideon’s Crossing. In 1998, The New Yorker asked Dr. Groopman to become a staff writer in medicine and biology.

Other books followed—Second Opinions: Stories of Intuition and Choice in the Changing World of Medicine (Penguin) and The Anatomy of Hope: How People Prevail in the Face of Illness (Random House). Dr. Groopman’s recent work, How Doctors Think (Houghton Mifflin), examines how physicians arrive at the correct diagnosis and treatment, and why they may not. He has also published more than 150 scientific articles, holds the Dina and Raphael Recanati Chair of Medicine at Harvard Medical School in Cambridge, Massachusetts, and teaches writing at Harvard College every spring.

Dr. Groopman’s approach may be best summarized in a framed print of Maimonides’s physician’s oath that hangs in his office: “Inspire me with the love of my art and for thy creatures. In the sufferer let me see only the human being.”

Dr. Groopman’s own experience as a patient has charged his perspective with a radical dose of empathy.

While training for a marathon in 1979, he suffered a back injury and opted for quick and disastrous surgery that left him debilitated for years. Like his patients, he found himself “vulnerable, confused and suffering, struggling to cope with a shattered world that appeared out of control,” he writes in The Measure of Our Days. This past summer, he reinjured himself and is still recovering from reconstructive surgery.

During much of the interview, Dr. Groopman lies on the floor, his head resting against a pillow. His six-foot five-inch frame, narrow face and beard suggest a whitehaired Lincoln double. Despite his obvious pain, he smiles often and genuinely. “In 21 years, I’ve never heard him raise his voice,” says his assistant, Youngsun Jung. “He is a real mensch.”

Dr. Groopman’s commitment to his patients and their loved ones also stems from the memory of his father’s death from a heart attack 33 years ago in a New York hospital with no intensive-care unit and no cardiologist. The family was horrified by the lack of expertise. “I was a second-year medical student,” Dr. Groopman recalls. “It was the greatest loss of my life and also the greatest motivator.” His father’s legacy as “stable and even-keeled” helps Dr. Groopman maintain his own calm. Treating patients with serious illnesses also puts the trivia of day-to-day life into perspective.

Another searing incident occurred when his oldest child, Steven, was 9 months old and became sick on an out-oftown visit. Dr. Groopman and his wife, Pamela Hartzband, an endocrinologist, took Steven to an older pediatrician, but he dismissed their concerns as the worries of first-time parents. Steven was later rushed to the hospital for intestinal surgery. Because the pediatrician made a snap judgment, Dr. Groopman says, Steven could have died.

His favorite among the pictures that line his bookshelves is one of baby Steven lying on his father’s chest. Steven is now 25 and a law student; Michael is 22; and Emily, 14. The books that are piled everywhere represent a mix of science, spirituality and literature (Leo Tolstoy, Chaim Grade, Israel Joshua Singer and Romanian author and Holocaust survivor Norman Manea are among his favorite authors). Other photos rest atop his desk, including one of Jordan’s late King Hussein. Dr. Groopman was one of the eight physicians who treated the king for lymphoma; he also cared for Hussein’s nephew, Prince Talal, whose lymphoma is now in remission.

Healing is key to Dr. Groopman’s work, but he is not content to let doctors remain on a pedestal. In a starred review in Publishers Weekly, author and pediatrician Perri Klass describes How Doctors Think as an “incisive and sometimes agonized inquiry into the process by which medical minds…synthesize information and understand illness,” and praises Dr. Groopman and the doctors he interviews for their willingness to “anatomize their own serious errors.”

He opens the book with this story: “Anne Dodge had lost count of all the doctors she had seen over the last fifteen years. She guessed it was close to thirty.” Dodge had been diagnosed with anorexia nervosa and bulimia as well as irritable bowel syndrome, but not until gastroenterologist Myron Falchuk uncovered her true problem did she find relief: She had celiac disease, an allergy to gluten.

The idea for the book came to him during supervisory rounds with medical students, residents and interns who “failed to question cogently, or listen carefully, or observe keenly,” he says. “They were…being conditioned to function like a well-programmed computer….” Despite the technologies of today, the real art of medicine requires communication and dialogue, Dr. Groopman stresses, one that should be valued more and taught better.

Dr. Groopman has a history of pioneering breakthroughs in medical science. “He has helped to revolutionize the way the world treats diseases,” says Dr. Abe Steinberger, a long-time friend and assistant clinical professor of neurosurgery at the Mount Sinai Medical Center in New York. “On all counts—character, integrity, brilliance, humility and academic achievements, he is outstanding,” Dr. Steinberger adds.

Partly because of Dr. Groopman’s research on AIDS, the death rate for the virus has dropped almost 80 percent in the developed world, where medications are available. His was one of the first groups to characterize the virus and, with other researchers and pharmaceutical companies, help identify lifesaving drugs like protease inhibitors.

Dr. Groopman wakes up at 5 A.M., writes, davens and walks before going to his office, alternating days between lab work (60 percent), patient visits (30 percent) and administration (10 percent). He swims or exercises before returning home by 7 P.M. On the occasions when he is worn down by the anguish of his patients’ suffering, his laboratory functions as a rejuvenating refuge. But most of the time, his patients inspire him. “The human spirit under the most difficult circumstances is extraordinary in terms of its reservoir of strength,” he says.

Portraits of patients characterize his books. Dr. Groopman describes Rachel Stein’s difficult flight home from Vietnam with her adopted baby, Shira, whose weakened immune system almost caused her death. At Boston Children’s Hospital, Shira was subjected to a battery of tests and then placed in the ICU.

“Rachel felt as if she were in one of those amusement park rides that spins you around in circles, turns you upside down, then flings you to the edge of the rail, so your eyes blur, your stomach heaves, and your mind goes blank,” he writes in How Doctors Think. Doctors diagnosed Shira with SCID, a rare disease, but Rachel did her own research and suggested that her daughter had a nutritional deficiency. Rachel’s instinct was correct, preventing what could have been a disastrous bone marrow transplant.

Dr. Groopman augments his vivid memories by writing down pertinent details on the index cards he keeps in his pocket and, with permission, retrieves information from patients’ charts. The most difficult aspect of the writing, he says, is adding his own personal angle. “It’s very hard to put myself on the operating table,” he notes, “but it’s important to open myself up if I want to be authentic. Otherwise it will be like describing only half the journey.”

“Jerry writes with unusual vividness and lucidity about timely medical issues and is able to untangle the complexities of important questions for readers,” says Emily Eakin, senior editor at The New Yorker. “He has the rare ability to translate medical jargon into layman’s English.”

Dr. Groopman will soon be editing an anthology of the best American scientific and medical writing, and he and Pamela are now pooling their efforts as consultants for an HBO drama pilot that will explore the battle against cancer, based on The Anatomy of Hope.

He has come a long way from the assessment his 5th-grade teacher made of him: She advised his parents that their child wasn’t college material. To this day, he regrets that, based on her advice, he took metal workshop instead of typing.

Dr. Groopman earned both his undergraduate and medical degrees from Columbia University in New York. In 1970, he spent three months in the hematology division of Hadassah Hospital in Ein Kerem, a “formative time” in his life he remembers with gratitude. “It’s one of the reasons I became a hematologist,” he says.

A midlife crisis motivated him to write three chapters of what became The Measure of Our Days. He had grown interested in how a person changes when facing mortality. His colleagues gave the draft glowing reviews, but his wife told him it was awful. It was rejected by 11 agents until one decided to take a chance on it.

In his own life, he defines hope as a “clear-eyed and realistic” outlook that recognizes obstacles yet sees the potential for a better future. In fact, hope and faith ground his Jewish identity, though much of his mother’s extended family—Satmar Hasidim from Hungary—perished in the Holocaust. His great-grandmother sponsored the remaining survivors’ emigration to America after the war. His father’s family was from Vilna.

As a child in Queens, New York, Dr. Groopman was tutored in “grammatical Yiddish” (not just schmoozing, he recalls, but conjugating), imbibed an openness to the outside world, a deep love of Israel, a strong work ethic, honesty and a generosity of spirit. His sister, Judith Silberstein, is now a kindergarten teacher, and his brother, Leonard, a psychiatrist.

Raised in a Conservative home, he made a compromise with Pamela, who grew up Reform, when they married 27 years ago: “She’d keep a kosher home if I learned how to ski.”

Dr. Groopman belongs to Conservative Congregation Kehillat Israel in Brookline and does not work on Shabbat. He has been awarded an honorary degree from the Jewish Theological Seminary in New York and sits on the board of the Charles Revson Foundation, a funder of science research and education in Israel, Jewish education and women’s projects.

“Judaism respects and also questions authority,” Dr. Groopman says. “It has no fixed dogma, but constantly interprets and reinterprets. In medicine, you need to challenge and be skeptical of what appears to be a given and try to always generate a diversity of views. From that diversity you go forward with what’s best for your patient.”

A few powerful quotes plucked from Letty Cottin Pogrebin's "Shanda: A Memoir of Shame and Secrecy" on being Jewish, shame, abortion and antisemitism. ⁠
⁠
"Shanda" is our #OneBookOneHadassah pick for October. Grab a copy and join us on Thursday, October 20 at 7PM ET/ 4PM PT for a virtual conversation with feminist icon Letty Cottin Pogrebin on her memoir of shame and secrecy. ⁠
⁠
Tap the link in bio to register. ...