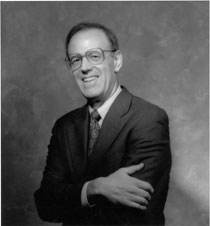 A pragmatic yet inspired advocate of worldwide democracy, Carl Gershman comes to work every day infused with the mission of strengthening freedom around the world by supporting effective nongovernmental initiatives.

Q. What’s the definition of democracy which you commit tens of millions of dollars to bolster every year?
A. It is the system that allows people to determine their own destiny not just through free elections but also through freedom of expression and conscience, while guaranteeing basic human rights in that society. It is a system characterized by…independent media, decentralization of power and effective local government so that it’s not a power-from-the-top-only formula.

Q. What example proves the formula as you describe it?
A. I was just in India and learned something fascinating. For its first three or four decades, there was an incredibly elitist democracy there. Until 1992, there were only 6,000 elected officials in that entire country. Middle-level and village leaders were all appointed. The constitution was amended. There are now three million elected officials…. It is a different kind of democracy today. This is how democracy takes root, deepens and spreads. Democracy must be responsive, deliver to the people and avoid corruption. If it doesn’t, it will lead to antidemocratic reactions.

Q. Are extremists in control today in the Muslim world?
A. [Extremists] represent a small minority of the Muslim world…. In the non-Arab Muslim world, in countries like Indonesia, Bangladesh and Bali, democracy is actually doing better than can be expected, given the [low] levels of economic development. In several Arab countries, however, it is faring worse.

Q. What happens when democracy leads to tyranny by extremists? For instance, in Gaza?
A. It’s a fundamental mistake to equate democracy with any single election, especially one in which a party that advocates and uses violence is allowed to participate. Democracy obviously involves an agreement on the ground rules for free and fair elections and a neutral election commission…. But one dimension of those ground rules should be the repudiation of violence as a means of political expression, so the mistake was allowing Hamas to participate in the first place.

Q. And in the rest of the Muslim world??
A. Even in a tumultuous country like Pakistan, a real democratic process would not lead to a victory of Islamic extremists. It would ultimately be a way to isolate extremists…. The key is that pragmatism must prevail for any party to earn its votes. The Palestinians in this sense demonstrate a dangerous situation, but even here, I believe my approach would work, as it’s happening in the non-Arab Muslim world and beginning to happen in Morocco, Kuwait, Yemen and in Jordan to a certain extent. The presidential election held in Yemen in 2006 was the freest election ever held in an Arab country, despite some election-related violence and vote buying. All five candidates were given equal airtime on state television. They were able to hold rallies and campaign freely, the international press and election monitors were welcomed. The European Union mission called the election ‘an open and genuine political contest.’ Of course, the incumbent, President Ali Abdullah Saleh, won. But his lead opponent got almost 22 percent of the vote, which is unheard of in most of the Middle East.

Q. Let’s examine Russia. Communism is out, but is democracy in?
A. It is still very thinly spread and by no means deeply institutionalized. Election-wise, the government behaves with deep insecurity. Russia has never had a firm democratic tradition. It obviously did experience a horrendous totalitarianism, and under Communism millions of people were killed. Today’s situation is somewhat discouraging and is moving in the wrong direction. Yet we must look at the historical trend. The Helsinki human rights group was closed down by the government over 20 years ago. Yet today there are no less than 3,000 human rights groups in that country. There is an awakened civil society, although it is not yet the majority way. The democratic genie is definitely out of the bottle, and it’s not going to disappear. We are not headed back to a totalitarian Russia.

Q. How does President Vladimir Putin fit into the picture?
A. He is an autocrat who will play the nationalism card, challenging his people that they have lost their proud greatness of the past. He offers anti-American and anti-European rhetoric and hostility, trying to cut off those who reach out to the West. He casts suspicion on liberal elements, accusing or implying they are Western agents. Yet we must keep the lines open to these reformers. Eventually, I believe they will have a resurgence. The real question is whether Putin has the answers for his country. There is still a very high level of corruption. This is obviously a process that may continue for decades.

Q. And in China, do Pizza Huts near Tianamen Square mean that it has embraced new, democratic ways?
A. There has never been a Communist society with 160 million Internet users and untold numbers of cell phones…. China is no longer a totalitarian society. Yet how does it attempt to contain the forces being unleashed in every city, town and village? There is an emerging middle class. Lawyers who defend dissidents. Look, there is no guarantee that China will automatically evolve into a democracy due to its economic development, yet all conditions are in place precisely for such an evolution.

Q. Don’t external forces make an impact—in China, even?
A. That’s an interesting point. With the Olympic Games coming to China, there is a distinct possibility for the democratic forces to use the opportunity, to try to leverage it to get their issues known, not only for the international community, but inside China as well. We need to help these forces, which, by the way, are growing. When NED was created, only the Germans had a similar body…. Today, we have similar institutions in Great Britain, Canada, Western Europe, Taiwan, Australia…. If we can get India into this effort, as the world’s largest democracy, we would gain enormous credibility in Asia.

Q. Is the way Russia and China fight terrorism a force for or against democracy?
A. These are perfect examples of governments that justify anything they do as a means of repressing terrorism. For Russia, every Chechnyan is a terrorist, and equivalent attitudes prevail in China. Any dissident is an extremist, and the link to terrorism is not far behind. Yet there is always hope. The people of Venezuela recently rejected their leader Hugo Chavez’s march toward absolute power and voted down his latest proposed changes.

Q. Would democracy take root if we simply en­couraged the spread of McDonald’s, broadcast more rock ’n’ roll and put the Internet in the homes of people living under controlling regimes?
A. I must repeat my mantra: There’s nothing automatic about democracy. If you have fast food and Internet but you lack real representative institutions, the net result is an awful lot of cynicism. If the people continue to see corruption and poor performance by government, including even ostensibly democratic institutions, then you will also continue to see domination by the elites. Democracy has to be deepened, and it doesn’t deepen through the more superficial items you mention. Democracy must reach out and find ways to bring the people who are left out of the game into the process. If you miss that vital step, you’re going to be left with a very superficial and unstable kind of a system.