Letter from Brooklyn : Do the Right Thing 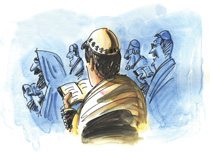 Can a person do for others at the same time that he does for himself? Here is one entrepreneurial davener’s story.

The Sunday morning service was called for 8 A.M., but I showed up at 7:47, figuring it’s good to be early on your first day of work. The rabbi shook my hand and I introduced myself, then got down to business, donning my talit and tefilin and opening my prayer book.

Watching the others trickle in, I wondered who was here as a loyal congregant and who, like me, was here for the dough.

I was a worshiper for hire, recruited off the streets, leading a secret life. Now it can be told.

It began with a dollar-sign poster on a busy shopping strip in Midwood, Brooklyn, that caught my eye, offering cash in exchange for attendance at a morning minyan.

Orthodox interpretation of hala- kha requires that 10 men over the age of 13 be present to form a minyan. Without that quorum, the Torah reading and many of the prayers are omitted, the most important of them being the Kaddish. To keep a minyan going and prevent members from praying elsewhere—and possibly not returning—some congregations go to extremes.

I took the phone number, intrigued by the concept. In my life, I have been paid for selling pizza, records and hardware; cold calling for a Wall Street headhunter; serving and busing tables; and writing, editing and reviewing books. Davening for dollars would be a new experience.

When I dialed the number, the rabbi did not ask for references or question me about my level of observance (which is modern Orthodox, fairly less strict than his brand). He offered five bucks a day for Sunday through Friday, with a $5 bonus at the end of the week if I came every day. They didn’t need me on Saturdays.

Thirty-five bucks a week may not exactly be righteous cash, but more than you get for praying in your living room.

On my first day, there were exactly 10. Like a rookie who scores on his first at bat, I had earned my keep on the first try. I enjoyed a moment of professional pride. But in later days, the count was often between 10 and 15. At times I felt like I was taking money for nothing. But it was no different, I concluded, from paying a relief pitcher for a game in which he never leaves the bullpen. You’re there for insurance.

Other days, even with me present, there were fewer than 10, and members had to go dialing for daveners or buttonhole passersby on the street.

I had heard of pray-for-pay before. Years ago, my editor at the New York Jewish Week showed me an advertisement in the paper soliciting minyan members. I made a call to find out what the story was and learned that the fading synagogue in question was struggling to keep its doors open and would prefer I not write about it; they did not want to publicize its desperation more than necessary.

But this later shul in Midwood, where minyans are as ubiquitous as fireplugs, seemed to be a thriving congregation that was just having trouble keeping the weekday minyan going during the summer, when members go on vacation. There were blueprints for an expansion hanging on the wall and the Torah was read from a scroll with silver handles, something I had never seen before. Clearly, money wasn’t an issue.

On reflection, I realized that getting paid for things people ordinarily do for free in Judaism is fairly common. People are paid to perform as cantors; to chant from the Torah; to say the Kaddish for others’ loved ones; even to learn in a kollel, a yeshiva for married men and rabbinical candidates. (My dream job, professional Kiddush-food taster, has yet to materialize.) There are probably parallels in many other religious communities to encourage participation.

When I asked a learned acquaintance what he thought about the whole thing, he said it was O.K. if you are not being paid for praying, which you would do anyway, but just for your time and trouble in praying at that particular venue.

Still, my conscience nagged at me. It didn’t help when my father-in-law, who attends minyan every morning—for free—disapproved and said synagogues often offer the money to attract people, but expect them to decline the stipend.

I resolved to donate some of the money to charity. I make regular contributions to worthy causes anyway. If I used the minyan dollars that way, it would be doing The Right Thing while supplementing my income at the same time. Everyone wins.

But after a few weeks, I wondered: Doesn’t charity begin at home? Using the money to buy beer or rent DVDs would seem plain wrong. Using it for food or clothes for my kids or to pay the electric bill—not so much.

And that’s when I really started thinking like a businessman. Was it prohibited to go to a second, later minyan after this one for more cash, or is that double dipping? Can I negotiate more money for days that have longer services, like Rosh Hodesh, the first day of a new month? (Is there a minyan agent around?) And what to do when the tzedaka box comes around? Won’t putting money in cut into my profit margin?

Then the end of the summer came and the rabbi politely informed me that his membership would soon be back at full strength and my services would no longer be required. I continued attending for a few weeks afterward for free because I thought it would look bad to disappear as soon as the cash dried up.

In the end, I decided to donate most of the money to an organization that provides Sabbath meals to needy families and a couple of other worthy causes. It made me feel like a better person.

And isn’t that what going to shul is all about? H