By Wendy Elliman May 2009
Email 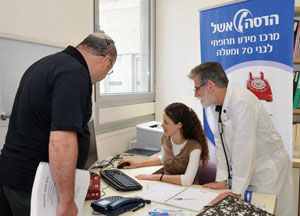 Hadassah is introducing a new model of geriatric care at its hospitals, bringing advanced services and research to Israel’s growing elderly population.

We are living longer than at any time in history, with the elderly sector worldwide increasing at twice the rate of any other age group. In what is surely one of mankind’s major successes, the better medicine, public health and economic development that underlie this surge suggest it will continue.

“In Jerusalem, 8 percent of the population is older than 65,” says Dr. Gideon Friedman, head of Geriatrics and Gerontology at the Hadassah–Hebrew University Medical Center in Jerusalem. “Many are immigrants who never saw their own parents age. They number over 60,000 people and are the largest concentration of elderly in the country, with their numbers growing by 900 to 1,000 each year. Age-related conditions have thus begun posing a significant challenge to health and welfare services. Without preparation, this is a time bomb.”

Dr. Friedman leads a group of doctors and researchers that has been developing and researching treatment and care for the elderly since 1991. The geriatric consultation team he established in Hadassah’s Department of Internal Medicine has grown into a full multi- and interdisciplinary unit. It runs a research laboratory, geriatric outpatients clinic and inpatient consultation service as well as international conferences and a growing number of pilot projects—from detecting elder abuse to manning the frontlines in the emergency room.

“We introduced a new model of geriatric care into Hadassah,” says Dr. Friedman. “We made it part of the medical and nursing milieu, and so influenced care of elderly patients throughout the medical center. Unlike most hospital geriatric teams, which rely on referrals, we initiate contact with all elderly patients. Our main focus is the frail elderly, whom we can most help. We assess their medical, functional, social, cognitive and mental needs and construct support programs so they can return to the community.”
With the population of older people in hospitals growing rapidly, targeted attention to their needs and specialized knowledge of the diseases to which they are prey are essential, he explains.

“As people age, their regenerative abilities are more limited and they’re more prone to disease, syndromes and sickness than other adults,” he adds. “We’re particularly alert to ‘geriatric syndromes’—common health concerns in the frail elderly, such as depression, incontinence, frequent falls, memory problems and the side effects of multiple medications.”

The health and medical history of the patient are, however, only part of the picture in elderly patients. “While the geriatrician is the point person on the team, we all take a role in the proper assessment of the older patient,” says Sarah Halevy Levin, a geriatric social worker at Hadassah. “We approach each person holistically, looking for the effects of past illnesses, evaluating available support—spouse, children, friends—and living and community conditions. We check that our patient can bathe, dress and eat independently.”

She cites an 85-year-old woman who was hospitalized after a fall. “This lady had been living on her own and managing well with help from her three children, who did her shopping and were in daily contact,” says Levin.

In Israel, family structure has remained largely traditional, she notes, with most elderly Israelis supported in some way by at least one child. Israel’s rate of institutionalizing its elderly is one of the lowest among developed nations. This patient’s fall and her subsequent hospitalization had, however, changed the situation. She was afraid of falling again and slightly confused. After a full assessment, the team met with the patient and her three children.

“It was clear that they all wanted her to be at home and live as before,” says Levin. “Our role was to explain that things had changed and a new solution was needed. We encouraged the family to plan ahead so the patient would be discharged to the right framework and not be back in the hospital again in a couple of months in greater distress.”
In this instance, the team judged that the patient could continue at home if she had more help. “Part of our job is, of course, to know what help is available and how to access it,” says Levin. “We helped the family obtain the help, and so enabled the patient to remain independent.”

As is typical, the team worked rapidly with this patient to help her leave the hospital as soon as possible. “Elderly patients can decline very rapidly in the hospital,” says Rachel Yaniv, a nurse on Hadassah’s geriatric team. “We put a lot of effort into reducing the impact of hospitalization and getting them back to base line. We encourage them to sit and to walk, to maintain the health of muscles, heart and bones.”

The department’s weekly geriatric outpatients clinic, like the inpatient service, addresses not only medical issues but also screens patients and assesses their functional, demographic and social situation. Last year, they extended this screening to Hadassah’s Center for Emergency Medicine, one of three Israeli hospitals taking part in a three-year pilot program designed and partially funded by Hadassah and JDC-ESHEL, the Association for the Planning and Development of Services for the Aged in Israel. The program is assessed by the Myers-JDC-Brookdale Institute’s Center for Research on Aging in Jerusalem.

As with all ER patients, the key to successful treatment is diagnosis, followed by stabilization and treatment. “But a pressured ER is a suboptimal setting for diagnosing confused or demented elderly patients,” says Yaniv. “Nor is there an appropriate discharge framework in place.”

In the Hadassah-developed model, Yaniv is in the CEM twice a day to screen all patients over 70, especially those who are not being hospitalized. She consults with the examining physician and consulting geriatrician Dr. Boris Michnik. Together they make recommendations that encompass medical, nursing and psychosocial aspects. All are included in the patient’s discharge letter to the family physician.

“As with everything new, the ER staff were unsure what to do with me at the beginning,” says Yaniv, smiling. “But very rapidly, I’ve become an address for all issues concerning elderly patients from physicians to social workers and nurses. I now hear nurses asking older patients the kind of questions I ask them: Who gives you food? Where do you live? Can you walk? While the geriatrician examines the patient, the social worker and I talk to the family and help relieve pressure on the other staff. And as a health professional specialized in care of the elderly, I can contribute toward diagnoses.”

Being in the CEM also allows Yaniv to pick up on aberrant situations. “A man in his eighties came in complaining of chest pains,” she said. “He was the patient, and so he was, of course, the focus. But he had brought his wife with him. While he was loud and demanding, she was silent, too silent. When the doctor examined him, I managed to talk to her and to examine her. Her clothes were dirty. Her body was bruised. She was malnourished. She had indications of old fractures. I later learned from the Magen David Adom team that her husband had hit her in the ambulance.”

Yaniv was distressed to find such blatant abuse, but she wasn’t surprised. Collaborative research between the geriatric unit at Hadassah and the Social Work Department at the Rambam Medical Center in Haifa to develop screening tools to identify elder abuse has found one in five elderly people in Israel as potentially vulnerable to physical, sexual or psychological abuse as well as to financial exploitation and neglect.

“Physical mistreatment is the easiest to identify, but also the rarest form,” says Levin, who is a member of the research team and serves on a national committee examining how hospitals deal with domestic abuse. “Abuse is often unintentional, but nonetheless damaging.”

She recalls an 82-year-old woman admitted to Hadassah for pneumonia. She was clearly hungry, malnourished and her body temperature was low.

“Her story came out gradually,” says Levin. “Years ago, one of her five children had persuaded her to sell her house. The son then used the money to build himself a large home, with a flat for his mother. The four siblings broke contact with both, in anger. The arrangement had worked for several years until the grandson grew up and wanted the apartment. The son moved his mother out and put her in a room in his house, encouraging her to stay inside it. Her meals were brought to the door. She grew frailer, needed more help and received less. Sometimes the family forgot to bring her food.”

That story fits a well-known pattern, says Dr. Friedman. Abuse, even when unintentional and particularly when unrecognized, increases with time. And when the abuser is the sole caregiver, the abused is usually too frightened to complain.

While the elderly woman’s health problems were addressed, the team met with her son and daughter-in-law as well as the four estranged siblings. “We explained that by law we have to open a file describing the abuse, either with the police or social services,” says Levin. “But that file can remain inactive if the situation improves. We worked out with them ways to make things better.”

Hadassah’s geriatric services are heavily indebted to generous donors. The unit was established in 1991 with support from Bessie and Louis Stein of Miami Beach, who helped the medical center create the geriatric task force that grew into today’s unit. American industrialist, financier and philanthropist Henry J. Leir endowed a chair. Their support, along with that of many other friends of Hadassah, has enabled the unit to develop and expand its clinical, teaching and research programs.

“We’re proud of the breadth and depth of our research,” says Dr. Friedman. “We’re investigating prevention and treatment of cerebrovascular disease in the elderly, the cellular and metabolic characteristics of aging, flu vaccination, nutrition, dementia, delirium, depression, falls and Alzheimer’s disease. We also teach in Hadassah’s medical and nursing schools, we train social workers and dental hygienists, run a residency program in the unit, and we’ve designed a comprehensive multidisciplinary gerontology-geriatrics course for hospital professionals, which we’ve taught in five, 60-hour courses.”

Since September 1996, when prospects for Middle East peace looked far brighter than today, the department has organized and run the biennial Stein Conferences on Aging in the Mediterranean and the Middle East. Chaired and run by Dr. Friedman, the conferences have shown very clearly that the concerns of aging transcend politics. The doctors, geriatricians, nurses, occupational and physical therapists, social scientists, demographers, epidemiologists, statisticians and policymakers who converge on Israel to debate the social and health care needs of their exploding populations of elderly come from Jordan, Egypt, the Palestinian Authority, Turkey, Malta, Cyprus, Greece, France, Spain and Italy as well as the United States.

“Geriatrics has a name as a frustrating, unattractive field of specialization,” says Dr. Friedman. “But the fact is, anyone who lives long enough will need geriatric care. And when I, as a professional, see what we can do to help older people in terms of quality of life, relieving problems and restoring dignity, for me, there’s no area of medicine that can compare.” H