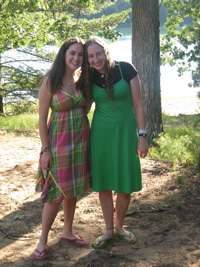 For years, Jewish sleepaway camps have provided a two-month break for boys and girls—a greater appreciation of Israel and Judaism is just part of the fun.

My daughter Shoshana lives through 10 months of the year for the remaining 2—the ones she spends at Camp Ramah in the Berkshires in New York.

During all my teenage years, I spent a total of one month at overnight camp. We took family vacations instead—cross-country, to England to visit my grandparents, to Canada, to Israel. So, at first, the intensity of Shoshana’s feelings was hard to understand.

I remember one visiting day when she guided me around camp, pointing to highlights as we made our way up a dirt path past the dining room (the hadar okhel), past an amphitheater overlooking Lake Ellis (theagam); the boys bunks encircling a grassy expanse (the kikkar); the softball fields, the basketball and tennis courts. I recognized her bunk in the girls kikkar by her beach towel, hanging from the railing along with a dozen other towels. Our last stop: a wooden sundeck overlooking the lake. “Isn’t it great?” she gestured, beaming, her ownership obvious.

Of course I said yes, but I did not really get it until I spent time working at camp myself. Then, I saw firsthand what the intensity was all about: the intimacy and bonding, the singing and swaying, the silly rituals and ruah. It is not something I could pinpoint. As Shoshana says, “When you are away from camp, you even miss the gnats.”

If, at 16, Shoshana cannot articulate—or even know—what the impact of camp will be on her Jewish identity as an adult, she can describe her favorite aspects. Her bunk: “They’re not just my friends. I live with them. There are no secrets….” Shabbat: “I love the feeling of it. At first everyone is running around borrowing clothes, straightening their hair. Everything is a big mess. Then five minutes later, we are sitting in the amphitheater overlooking the lake and it goes from craziness to serenity. Everyone’s pulled it together and looks so nice…. We’re all sharing one belief and singing about the same thing.”

The folks at the Foundation for Jewish Camp will tell you, as their Web site does, that “no experience is more powerful, thrilling or transformative” than overnight summer camp (www.jewishcamp.org). All 150 of the nonprofit camps in FJC’s orbit, from Reform, Conservative and Orthodox to Young Judaea and JCC, has its own culture, but all celebrate Judaism in an open environment, away from home, fostering Jewish living 24/7, with programming from sports to outdoor adventure trips and Jewish studies. The foundation’s motto is “community by the cabinful.”

In 2008, close to 70,000 children attended Jewish overnight camps, which are distinct from day camps. Costs range from $800 to $1,000 for week-long programs to up to $7,000 for an entire summer. The economic crisis and Bernard Madoff scandal have had some effect on camping, says FJC President Jerry Silverman. Enrollment is slightly down for 2009, and scholarship requests have spiraled from 10 to about 25 percent of applicants and are tapping into their federations, congregations and donors to meet the need.

For Allison Adges, Tel Yehudah, the national Young Judaea senior leadership camp for high schoolers (212-303-8014; www.youngjudaea.org), allowed her to be a different person than she was at school. “One of the pillars of Young Judaea is peer leadership,” says Adges, 21, who was a unit head at Camp Young Judaea Midwest last summer. “I’m a quiet kid. Camp showed me there could be all kinds of leaders.” Rarely exposed to peers beyond the Conservative movement, camp was eye opening: “It was cool to see everyone—Reform, Reconstructionist, Conservative—all get along and be comfortable at tefilot together.” The leadership training she received at Young Judaea, which is celebrating its centennial this year, motivated her to take on responsibilities at the Hillel at Binghamton University, State University of New York, where she is a Judaic studies major.

The orientation of camps vary. Among the many offerings across the United States are the coed, Bnai Akiva-sponsored Camp Moshava (212-465-9021;www.moshava.org) in the Pocono Mountains, which is Orthodox and Zionist, and the Jewish culture camps in New England—Camp Tel Noar, Camp Pembroke and Camp Tevya—run by the Eli and Bessie Cohen Foundation (508-881-1002;www.cohencamps.org). Newer specialty programs have cropped up: BIMA (781-736-8417; www.brandeis.edu/bima), a three-week nondenominational arts program held on the Brandeis University campus in Waltham, Massachusetts (now in its fifth summer); and ecamp (877-322-6748; https://ecamp4u.com), a pluralistic technology camp that offers two-week sessions at sites in Israel and North Carolina.

Despite the differences, the devotion to camp binds all campers. “It feels like a family,” says Chedva Weissler, 14, of Teaneck, New Jersey, who has attended Moshava for the past three years. “Everyone is connected and feels the same about Judaism and Israel.”
For some, the camp aura never fades. Jules Eisen, an FJC board member, attended the boys-only Camp Mohican in Palmer, Massachusetts. Though the camp closed in 1960 (another camp is now on the site), the former campers, now between ages 60 and 90, wouldn’t dream of missing their summer reunions. “We only want to sleep in the bunks we slept in when we were teenagers,” says Eisen.

The National Ramah Foundation (212-678-8881; www.campramah.org), with seven overnight camps, even has a section on its Web site listing 308 couples who met at Ramah and later married. And there are probably hundreds more, says Rabbi Mitchell Cohen, national Ramah director. Michelle Emily Weisfelner Bloom and Jonathan Scott Bloom met at the Berkshires location when they were 15. “There must be something magical in the air there,” writes Michelle on the site. “If not, how could you explain how so many of us found not only love but lifelong friendships there that span well beyond our years as campers and into adulthood?”

Never a camper himself, Silverman has seen how Ramah resonated with his five children, ages 14 to 23. He recalls that at the end of his oldest daughter Alison’s first summer, “she was in a circle with her new friends, crying like it was the worst thing on the planet. They were so connected at 9 years old….” Two years ago, his son Mitchell (now 19 and a counselor) said in a d’var Torah, “I love day school…but camp allows me to take… Judaism from my head to my heart.”

“The total currency of daily life at camp is fun,” says Rabbi Ramie Arian, national director of Young Judaea. “Everything becomes effortless, and in that context campers are exposed dozens of times a day to a variety of Jewish inputs and connections to Israel.” On a typical day, he notes, Young Judaeans wake up to Israeli music on the loudspeaker, gather at the flagpole, where Israeli scouts lead them in cheers and teach a Hebrew word for the day, and then participate in peer-led tefilot (some camps have options that include traditional, mehitza, guitar, Torah study or yoga minyanim) that highlight a different Israel-focused prayer each day. A third of the counselors are Israeli, “charismatic role models” who embody the most powerful way to connect campers to Israel, says Arian.

In How Goodly Are Thy Tents: Summer Camps as Jewish Socializing Experiences(Brandeis University), social psychologists Amy L. Sales and Leonard Saxe report that camp can leave a deeper impression on staff than on campers. Counselors, says Sales, are “emerging adults” on the brink of making decisions with enduring consequences about their careers, relationships, world views, religion and community.

Lev Horowitz, 21, oversees the hiking program at Camp Galil (484-684-6532;www.campgalil.org), a Zionist Habonim camp in Ottsville, Pennsylvania, where he began as a camper at age 9. “Habonim molded a lot of my Jewish identity and most of the way I think about Israel,” he says. “It taught me to think critically and for myself.” For most kids, he adds, “camp is the most Jewish thing in their lives.”

One of the best aspects of camp across the board is Shabbat, says Sales: “Unlike at home, there are no distractions; it’s done organically and it’s not a matter of choice. It’s often in nature, a deeply spiritual prayer experience under the stars or by a lake…. The environments are set up for creativity, high risk-taking and are nonjudgmental. Kids who can’t sing get up to sing and everyone cheers…. It’s embedded in a predictable framework, where everything is the same this year as it was last year.”

Sales emphasizes that there are no comprehensive studies on the impact of camp on Jewish identity. For that, she says, “we would have to follow children from birth to adulthood, half who attended camp, half who did not.”

“What’s great about a Jewish camp is that it gives a full context to being Jewish,” says Rabbi Howard Stecker of Temple Israel of Great Neck, New York, who has taught Jewish studies for the past nine years at Ramah in the Berkshires, his stomping grounds as a camper and counselor. His three sons are also campers and counselors. “Year- round communities need to learn more from the camp model, the way Judaism permeates every aspect of life and every moment of the day…. A hike can be an opportunity for a b’rakha; an argument, an opportunity to teach Jewish values.”

While camping has long been a vital influence on youth, only in the past few years has it been promoted as a key to Jewish identity, backed by massive funding. That is largely due to FJC’s work, cultivated and driven by Silverman’s marketing savvy (he held executive positions at Levi Strauss and Stride-Rite). FJC was conceived in 1998 by Robert and Elisa Spungen Bildner, who felt the most undervalued experience on the Jewish menu was camping and wanted to elevate it. Attendance has risen from 55,000 in 1999 to 70,000 in 2007. More funding has poured into camps in the past five years—for new facilities and programming, staff training and increasing attendance—than in the last 35 years combined, according to Silverman. “We want to have strong leadership,” he says, “a better product, increase the community’s interest and knowledge and address the supply and quality of facilities.”

A $25-million matching-grant camper incentive program to be rolled out in 60 communities (it is already in 22 cities) encourages families to choose Jewish camps. Funded by an anonymous donor, the program awards non-needs-based stipends of $1,250 for first-year campers; $750 in their second year. Other foundations aiding Jewish camps include the Jim Joseph Foundation ($11.2 million to entice 1,000 new campers per year over the next four years; and $8.4 million to start four specialty camps in areas from sports to arts); the Marcus Foundation ($1.9 million for CEO-type leadership institutes for camp directors); the Harold Grinspoon Foundation (a matching-grant program that has yielded $40 million of capital improvements to camps); and the Avi Chai Foundation, which has funded initiatives including shlihim (Israeli emissaries) and counselor retention.

Numbers may place the camp experience in a statistical framework, but for Zachary Goldstein, 18, of Albany, New York, the impact is immeasurable. Ten years ago, he spent two weeks at Sprout Lake, a Young Judaea camp in Barryville, New York. “It was the first time I was in a 100-percent Jewish community,” he says. “I felt part of something bigger than myself.” Goldstein is past national Young Judaea president and spent this year in Israel on Year Course. He says camp empowered him to participate in global teleconferences with other Jewish teenagers, social action trips to Washington, daily conversations about Israel and more. “It has given me the tools,” he says, “to help me feel I can make a difference in the world.” H