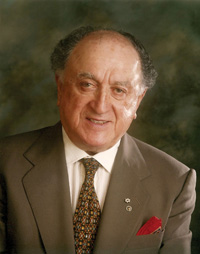 David Azrieli has had a profound impact on the landscape of Israel. Among the most notable projects of the 87-year-old builder, developer, architect and philanthropist are Jerusalem’s Malkha Mall and the Azrieli Center in Tel Aviv. Born in Poland, Azrieli escaped during the German occupation and is a veteran of Israel’s War of Independence. He moved to Canada in 1954 and, in addition to his work in Israel, has developed projects there and in the United States. a He earned his architecture degree from Carleton University in Ottawa at the age of 75 and has funded two schools of architecture at Israeli universities. Today, he devotes equal time to introducing new architectural and business models and to philanthropy through the Azrieli Foundation (www.azrielifoundation.org).

Q. The towers of the Azrieli Center have changed the face and, to a certain degree, the character of Tel Aviv. Have you met your personal goals and business expectations?
A. When I go to Tel Aviv and see the towers dominating the skyline—the circle, the square and triangle and their trademark blue and white windows—I feel prouder than I could ever express in words. From a design perspective, I think that the Azrieli Center is the most interesting project I have ever completed in my lifetime. At the same time, I have done many other projects that I also feel deeply satisfied with.
My work in Israel began in the early 1980s and has continued without interruption ever since. It has taken place across the country, not limited to just Israel’s largest city. The Azrieli Center can be seen as a culmination of all that. And, yes, it has also been a great business success.

Q. You were first to introduce the Western-style shopping mall to Israel. Two and a half decades later, what’s the verdict: Good, bad or neutral?
A. The introduction of the first mall in Israel, which opened in 1983 in Ramat Gan, dramatically changed the style and operation of commerce in the country and the lifestyles of millions of Israelis. This change has definitely been for the better. The malls have become places for the entire community to gather for activities. I believe that the mall has become a great equalizer for the population, linking remote areas of the country [and allowing them] to enjoy the same facilities as in the city center. The malls also created the conditions for a great number of chains to bring better goods and better services to the people.
Since that very first mall, we have built eight others as well as office towers, a high-tech park and industrial buildings.

Q. Is your hands-on style giving way to new “virtual” entrepreneurs and high-tech visionaries?
A. I am indeed a bricks-and-mortar businessman but, primarily, I am a designer who is proud of his ideas and buildings…. In my philanthropy, I am the total opposite of bricks and mortar as I concentrate on helping people to help themselves—through intangibles and values, primarily in the realm of education.

Q. Do you ever fear that some of your buildings in Israel might be targeted for terror attacks?
A. Israel has been subject to terrorist attacks since its earliest days. We must remember the innocent children killed by terrorists, and the list is long. Of course, the possibility of anybody, including myself, being subjected to an attack by a hostile government or terrorists exists, but it has not stopped me, or Israel, from growing and prospering and providing conditions for a remarkably high standard of living.
Of course, the 9/11 attacks were horrific, but this must not change our basic outlook or our determination to lead normal lives in the face of those who wish us harm. Prospering and growing are both the greatest revenge and our best response.

Q. You have been very active in Jewish education. In 1983, you established the Azrieli Graduate School of Jewish Education and Administration at Yeshiva University in New York. But you have also done much more for education through the Azrieli Foundation, which is known to be a labor of love for you and your family. What kind of projects do you support and promote in Canada and Israel?
A. The Azrieli Foundation supports many different programs and initiatives in education, Jewish and general, in scientific and medical research, in Holocaust commemoration and in the arts.
I am particularly proud of the three major programs we founded and now operate. One is the Azrieli Institute for Educational Empowerment, which encourages at-risk Israeli high-school students to stay in school, giving them social skills and knowledge to close educational gaps, and provides parents with tools for improving family relationships.
The Azrieli Fellows Program provides a graduate fellowship for study at Israeli universities in the fields of interdisciplinary and applied sciences, education and architecture and urban planning.
The Holocaust Survivor Memoirs Publishing Program collects, archives, edits and publishes the memoirs of Holocaust survivors in Canada. (The Azrieli Series of Holocaust Survivor Memoirs was established in 2005 and is available on the Azrieli Foundation Web site.)
I established the foundation [in 1989] to ensure that my personal commitment to the Jewish people and to the educational world will continue in perpetuity. I see it as my most important legacy; I really want it to make a difference. In fact, it is one of my very deeply held beliefs that when you give back to the community, this is done not only with money, but also through time and personal involvement. You must give with your heart and in such a way that one truly believes it is making a difference.

Q. What do you think of the new Likud-led government’s efforts to encourage privatization in the economic sector?
A. I refrain from commenting on the policies of any Israeli government. Having said that, it is a fact that privatization has been an enormous boon to the economy of Israel.

Q. Do you fear reduced Jewish support for Israel during the current economic crisis?
A. Today’s economic challenges are felt especially in the domains of education and programming and in a greater demand for help for the needy. I am confident and believe that this challenge will be temporary.

Q. Canada is today one of Israel’s strongest supporters in the world. To what do you attribute this?
A. Yes, Canada is Israel’s staunchest international supporter today. It is fair to say that this tracks directly to our prime minister, Stephen Harper, who has a deep understanding for the Jewish people and appreciates their return to their ancient homeland.

Q. What is your most passionate vision for Israel in the short-term future?
A. My commitment is for the people to be prosperous, to enjoy a high level of educational support and, of course, to live in peace in a Jewish state. H