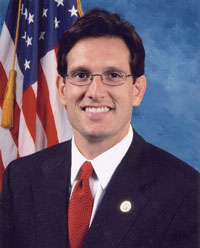 Eric Cantor, a Virginia congressman, is Republican Whip in the House of Representatives and the only Jewish Republican in Congress. Widely regarded as a rising star in his party, Cantor, 46, recently led a congressional fact-finding trip to Jerusalem, where he spoke toHadassah Magazine.

Q. Can America prevent Iran from going nuclear?
A. Iran poses an existential threat to Israel and, I believe, ultimately to the United States. Iran adheres to religious extremism and a doctrine of hate. It supports terrorist proxies and Hamas and Hezbollah, which pose a security threat to the lives of innocent people every day. I do not think that there is a higher priority for America than to work with our allies to isolate the regime in Tehran and to stop their nuclearization. We will do whatever we can, and I believe that now that the [Obama] administration has adopted a policy of engagement with this terrorist regime, it is all the more important for us to encourage the passage of economic sanctions. I support the effort to bring to the floor of the House of Representatives the Iran Refined Petroleum Sanctions Act, which will cut off the ability for Tehran to import gasoline for vehicular travel.

Q. How has American foreign policy changed since Obama became president?
A. There is no question that the tenor of our discussions has changed. Instead of focusing on the threat that Israel and the United States face with the potential nuclearization of Iran, we are now seemingly focused on natural growth in settlements, on whether Jews can live in East Jerusalem and other issues that I do not think warrant the type of priority being placed on them.

Q. Are these changes having an impact on public opinion in the United States?
A. I don’t know the answer to that since I haven’t studied the polls on this question. I do know that the American public overwhelmingly supports our ally and friend Israel, understands that Israel sits on the frontline of the ideological battle between those of us in the free world and those in the world of radical Islam.

Q. Where does Israel fit into your worldview?
A. Since 9/11, there is a growing awareness of the link between the American and Israeli peoples. They are not just empty phrases when we say we share our values with Israel, we share aspirations, we share the love of freedom. It is genuinely the role that the United States plays as far as a leader, a global economic power enabled to disseminate the value and message of enabling and empowering freedom. [My delegation] met with President [Shimon] Peres, who said what is astonishing about America is we act with determination, we send our men and women overseas to fight…and we never take anything for ourselves. Look what we did for Germany, for Japan, the Marshall Plan in Europe after World War II. Hopefully, we will hand over a better Iraq to the Iraqis.

Q. How would Americans and Capitol Hill react to independent action by Israel to stop Iran from going nuclear?
A. I support the right of Israel to defend itself against known threats to its people and homeland. I believe Congress and the American people understand that it is not in our interest to have a nuclear Iran, which will destabilize the region and threaten the very survival of one of our closest and strongest allies.

Q. How do you see future United States-Israel relations?
A. I am an optimistic person. I believe strongly that the American people see in Israel a very important connection to our own security strategy. Israel has demonstrated its commitment to freedom and to combating the spread of radical Islam. Especially in light of the shared experience of being on the receiving end of terrorist attacks, the United States-Israel relationship will continue to grow and strengthen.

Q. When President Obama visited Buchenwald concentration camp in June, he made a statement that suggested to Israelis that their state was created because of the Holocaust. Did you take his speech the same way?
A. It wasn’t just Israelis who took offense; it was many in the American Jewish community. That very idea ignores the historical and biblical connection that the Jewish people have to Israel. And it is that linkage, it is the Jewish people’s claim to the Land of Israel that drives the search and the design of any type of road map to peace. I think it is very wrong to suggest that Israel exists as a modern state because the Middle East somehow had to pay for Europe’s sins. That is not accurate….

Q. What are your thoughts on abortion?
A. The Jewish religion is all about discussing differences and trying to get to an interpretation that maybe all can agree upon. There is a lot of discourse in our religion and rabbinic argument. I live that approach every day. I am married to a woman who was born and raised in Miami Beach, went to a Solomon Schechter school and is very pro-choice. I happen to be pro-life. We admit these differences that we have but we get along. I don’t necessarily think there is a monolithic Jewish position regarding abortion. It is not all pro-choice. I do think that we can bridge differences on even controversial issues, and that is how I continue to try to live my life.

Q. Will the United States have a transformed health care system this year?
A. Republicans do not support the status quo. We hope we can find a bipartisan solution based on the Republican plan, which will expand access to affordable health care coverage by building on what works and fixing what’s broken in the existing system.

Q. Every election cycle, Republicans talk of new strategies to attract Jewish voters. Will a real shift ever take place?
A. There is no secret—the Jewish community of America is overwhelmingly with the Democratic Party. It is my belief that most of the positions in the American Jewish community tend to lean toward the left. But I was raised in a traditional Jewish home, am active in a vibrant Jewish community in Richmond, Virginia, have a mother who put Hadassah first and a wife who is a Hadassah life member and I see things differently. There is a place for American Jews in the Republican Party. I think we will see an increase in [Jewish] openness to involvement with the Republican Party. The party is trying to refocus to engage in a dialogue with people throughout the Jewish community, and not solely with the Jewish community. The G.O.P. is based on the tenets of free market economy, of entrepreneurship, of individual responsibility and faith in God, and the ability for one to practice one’s own religion. We are relevant, we do have solutions that speak to people’s challenges and I do think that will have a positive effect on attracting Jewish voters.

If this Obama administration does not alter its focus and emphasis as far as Israel is concerned, you will see an increase within the American Jewish community of interest in the Republicans.

Q. How was your Jewish identity shaped?
A. I grew up in [a family that was] involved in the [Jewish] federation…in activities and events supporting Israel. One thing that was taught to me was tikkun olam, active engagement in trying to make the world a better place, really trying to do some good. We can only do that if we are open, tolerant and begin talking to one another about differences…. [Today] I actively learn with a rabbi in Washington on a weekly basis and do my most to sustain spirituality and faith in my life.

Q. How often do you visit Israel?
A. I came to Israel for the first time when I was 19. I have been back many, many times. This is my fifth mission associated with AIPAC. All told, I guess I’ve been fortunate to be here at least 10 times.

Q. Do you see yourself in the future serving in higher office—as senator, vice president, president?
A. Representing Virginia’s 7th Congressional District and being the House Republican Whip are extremely gratifying jobs. I am very happy in my current roles and I will continue to work every day on common sense solutions that will get Virginia and our nation back on track. H