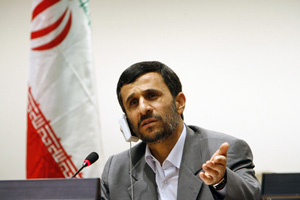 Is Tehran working on an atomic bomb? What is America doing about it? And what should Israel do? These questions fuel the growing anxiety in the Jewish state.

There is no doubt that Iran is on Israelis’ minds. While no one is building nuclear fallout shelters as Americans did in the 1950s, discussions of Iran’s nuclear ambitions have become a constant backdrop.

The situation is reminiscent of the period before the Six-Day War, notes Myrna Enker, a retired psychology lecturer in Jerusalem: “We felt an existential threat to the Jewish people then. Iranian President Mahmoud Ahmadinejad’s Holocaust references and outright declarations about destroying us create similar fears now.”

Yaffa Biton, a widow with Army-age sons, overhears conversations on the bus describing the Iranian bomb as a harbinger of the End of Days. “And the rabbi in our local Sefardic synagogue talks about it as the apocalypse before the coming of the Messiah,” she says. “These are all older people who follow the news and think in biblical terms.”

The media is constantly flooded with analyses of international responses to Iranian nuclear power: Will American President Obama’s diplomatic policies convince Tehran to freeze its nuclear program? What will happen if it does not?

Obama’s willingness to talk to the Iranians has added to Israeli fears.

“I agree that we should try dialogue,” says Fran Ackerman, a family therapist, “but what will America be willing to do if it doesn’t work?”

A 2009 poll sponsored by the Center for Iranian Studies at Tel Aviv University put Israeli attitudes into numbers: Of 509 Israelis in the study, 81 percent believe that Iran will attain a nuclear device. Israelis aged 42 and older are more concerned about the potential bomb than their younger counterparts. Yet 89 percent in this age range would not consider emigration even if Iran attains nuclear capability; among those younger than 42, 64 percent would not consider emigration. In addition, the majority—74 percent—does not believe that current American policies will persuade Tehran’s regime to change its course, though 49 percent feel that Israel should wait before pursuing alternative paths. In fact, Israelis are split almost evenly between supporting a preemptive attack and adopting a more patient approach, with 51 percent backing an immediate strike on Iranian nuclear sites.

Anxiety over Iran has pushed many Israelis toward the right politically—particularly after the Hamas takeover of Gaza and the group’s Iran-backed shelling of Sderot and Ashkelon. Even the far left is reluctant to cede the West Bank to the Palestinian Authority for fear that Iran, through Hamas, will make the West Bank another launching pad for shelling Israeli cities.

In an April 2009 ha’aretz article, left-wing columnist Ari Shavit projected a grim picture of the future in the face of Obama’s policies and Iran’s continued arms buildup. In his scenario, Tehran announces it has nuclear warheads aimed at Riadh, Cairo and Tel Aviv in 2010. Moderate Arab states surrender to Iran and a bloody war of attrition breaks out between Israel and the Palestinians. Because of the upheaval in the Middle East, Afghanistan goes up in flames, oil rises to $200 a barrel, plunging America further into economic recession, with Europe looking to China for leadership.

Most Israelis, however, don’t envision such extreme scenarios. In fact, according to Daniel Bar-Tal, professor of social psychology at Tel Aviv University, right-wing politicians are using the situation to manipulate the Israeli public. He feels that Israeli governments often demonize the other side for internal political reasons, to build support and create solidarity.

Bar-Tal has studied how collective memory—particularly memories of the Holocaust and terrorism—creates fear and affects Israeli willingness to try to find a compromise with the Palestinians. And while he recognizes that Iran is the number one issue in Israel, “and they are probably developing nuclear devices,” he admits, “very few people really know what’s happening. There is not full information about it. This…feeds the sense of existential insecurity that Jews carry with them because of the persecution of 2,000 years. Any type of threat is compared to the ultimate threat. And Ahmadinejad’s rhetoric combined with Iran’s nuclear development feeds into Israel’s sense of insecurity.”

However, he points out, Israel has been pouring oil on the fire with rhetoric about destroying Iran, instead of moderating the situation.

“I’m afraid it could be a self-fulfilling prophecy,” Bar-Tal adds. “Both sides can push to such an extent that there’s no possibility of return. We must distinguish between actual and perceived threat.”

Regardless of whether or not the threat is real, it is contributing to the growing perception that the Jewish state is losing control of its fate.

“Throughout history, Jews were consumed with a sense of vulnerability,” notes Daniel Gordis, senior vice president at the Shalem Center, an academic research institution based in Jerusalem. “But 1967 transformed the Jewish sense of self. Until then, we didn’t feel confident that Israel was here to stay. In 1967, Jews proved they could defend themselves.”

In his most recent book, Saving Israel: How the Jewish People Can Win the War That Never Ends (Wiley), which addresses Israel’s survival in face of constant conflict, Gordis explains that over the last decade Israelis have slowly started to feel vulnerable again. “Before the second intifada, the military protected the home front. The war was elsewhere,” he says. “But the intifada brought it onto our streets and buses. Then the Second Lebanon War [in 2006] erased the distinction between front and home. Technology created the possibility of shelling much of Israel.

“And now, with nuclear technology in the hands of a maniac,” he concludes, “our sense of security is undermined altogether. It’s the undoing of the promise of political Zionism that sovereignty will assure a safe haven. Zionism’s raison d’être lies elsewhere, in the need for the continuity of a national culture. But security-wise, we are again in a passive situation, while the world tries to talk down Ahmadinejad.”

Despite the sense of threat, the country is thriving. Real estate prices are up. People continue to enjoy cultural and public events. Last summer’s Maccabiah games was a marvelous celebration of both sports and Jewish solidarity. The Israel Festival and the Israel Film Festival, both held in Jerusalem, brought record numbers of people into the city. And 100,000 people attended conductor Daniel Barenboim’s performance of Verdi’s Requiem in Yarkon Park in Tel Aviv.

There are those who insist that Iran does not have that much of an impact on daily life. “The Iranian threat is not really at the forefront of awareness,” claims Danny Brom, general director of the Israel Center for the Treatment of Psychotrauma, affiliated with the Herzog Hospital in Jerusalem. “Jews know that people have tried to kill them before. And we will get through this, too. Man has a natural system of detecting danger. At this moment, it is still perceived as theoretical.”

Even Ackerman notes that she tries to focus on issues that she personally can control. “I realize I am in denial,” she says, “but as long as the threat is hypothetical, not actual, as it was in Sderot, I put it out of my mind.”

“I worry more about my children traveling on the road than I do about Iran,” says Marvin Rapp, owner of La Cuisine Bakery in Jerusalem, as his favorite jazz disc plays in the background. “Actually, I don’t know what to worry about first. There are also the Pakistani bombs getting into the hands of terrorists. There is so much uncertainty in the world today.”

Cab driver Binyamin Levi sees denial all the time. “This guy Ahmadinejad is full of hate,” he says. “He wants to conquer the whole world, but most people just want to forget about him. Haredim especially get into my cab and say, ‘Turn off the radio. It is all politics. We shouldn’t think about it.’”

Dick Hirshhorn, who lost his family in the Holocaust, does not see Ahmadinejad’s threats in Holocaust terms. “Life is totally different than it was at that time,” Hirshhorn notes. “I was a child [then], but I remember the very real panic among Jews in Germany. My parents tried everything. They were hoping to get visas to Uruguay but, tragically, they did not succeed.”

Israel’s greatest psychological boost comes from the renewed preparedness of the Israel Defense Forces. The Army has recently staged a number of naval and air exercises, which, according to pundits, suggests that the military is preparing a pre-emptive strike.

“The Army has placed Iran as its first priority,” says a senior Army officer who prefers to remain anonymous. “This isn’t only because of its potential atomic capability, although that existential danger is a possibility. Its focus is on Iran as the machine that generates other threats.”

Soldiers’ training now extends to both conventional and chemical warfare with Iran. Repeated drills have created new confidence and skill—something missing during the Second Lebanon War. At the same time, diplomatic efforts are being made to influence the United States and the European Union to put political pressure on Iran.

Civil defense is the other IDF priority, with families stockpiling food and other supplies in shelters, communities organizing defense plans and establishing a routine for distributing necessities in case of war. Even national exercises intended to raise public awareness about possible missile attacks have been held.

“Being prepared, having a toolbox of responses for a crisis, is the best way to counteract trauma,” says Talia Levanon, chief executive officer of the Israel Trauma Coalition for Response and Preparedness. “Consequently, there has been extensive drilling on the individual, family and community level.”

“The important thing,” concludes Brom, “is that people are living with the sense that their safety needs are being taken care of. And it is only the IDF that can really take care of these safety needs. It’s out of the hands of the average Israeli. There is nothing he can do at the moment. It might be denial, but it’s healthy denial.” H