Tobi Kahn’s Sacred Spaces
“I want the viewer to enter into a space that I have created and leave with a sense of inner peace,” said the artist Tobi Kahn in a recent interview. His show, “Sacred Spaces for the 21st Century,” is now at the Museum of Biblical Art (MOBIA), a recent addition to the New York cultural scene.

dimension of modern art, a stance that went counter to the then current artistic trends. His ever-increasing body of works—which include sculptures, Jewish ceremonial objects, and interior installations—were exhibited to critical acclaim in museums and galleries all over the United States. Perhaps it is coincidental that currently, across town from MOBIA, which is on the West Side of Manhattan, in the Guggenheim Museum, on the East Side, there is a retrospective of Kandinsky, the great pioneer of Abstract art who espoused “hearkening to the inner sound.”

For Kahn, the inner sound is profoundly Jewish, rooted in his strong belief in and knowledge of the Jewish tradition.

“Tobi Kahn is fascinated by, even obsessed with, the notion of space—not simply physical space, but much more, its spiritual dimension,” writes Daniel Sperber in the handsomely produced MOBIA catalog, edited by Ena Giurescu Heller.

The show assays different kinds of sacred spaces: a synagogue interior, a funeral chapel and an interfaith space for a hospice. Each is a comprehensive conceit, an environment where every part of the design—from the murals to the ceremonial furnishings and objects—coalesces into an organic whole.

Kahn’s latest and most ambitious project to date are installations in Congregation Emanu-El B’ne Jeshurun in River Hills, WI. On display at the MOBIA show are eight six-foot high abstract panels in shimmering tones of gold and white, an architectonic Torah Ark, a pomegranate-shaped Eternal Light, Torah breastplates fashioned from wooden cubes, and a four-foot high tzedaka box that has the dignified presence of some ancient temple.

Visually, the exhibit is dazzling. Kahn, a master of sensuous textured surfaces, invents shapes that surprise with their originality. His paintings are built up of myriads of small brush strokes resembling silk threads. The finishes of his wooden ceremonial objects are painted to simulate the patina of metal.

The essence of the impact of Kahn’s art is eloquently captured by the writer Nessa Rapoport in her lyrical poem “Song of Thanksgiving” that accompanies the images in the catalog (published by the Museum of Biblical Art, New York, in association with D Giles Limited, London).

Correction: In our Brief Review of the exhibit “Tobi Kahn: Sacred Spaces for the 21st Century” in the December 2009/January 2010 issue of Hadassah Magazine, the reviewer wrote that “His latest project is the interior design of a Milwaukee synagogue…” In reality, Kahn created an installation of eight murals and ceremonial objects for the sanctuary of Congregation Emanu-El B’ne Jeshurun in River Hills, WI. It is Phillip Katz-Project Development (PKPD) that is responsible for design of the improvements entirely and specifically for designing the sanctuary.

There’s a Mystery There: Sendak on Sendak
Taken from his Brooklyn childhood and his father’s tales of the shtetl, movies, the Holocaust, Mozart and the Brothers Grimm, Maurice Sendak, 81, has created ambiguous, sometimes frightening works. Many of the 100 books he has written or illustrated, such as In the Night Kitchen (below), arranged by themes—kids, monsters and influences—are on display, including drawings, photos and paintings, revealing how his reality has informed his fantasy. Through January 19, 2010, at the Contemporary Jewish Museum, San Francisco (www.thecjm.org).
—Renata Polt

Chanukah Fever
These 13 “Macca-beats” come from the hyper-original mind of Mama Doni. For young or old, as long as you want new and wacky, try these songs on for size: “The Funky Gold Menorah,” “Latke Man” and “La Vida Dreidel.” Mama Doni Productions (www.mamadoni.com). —Susan Adler

Zingt! A Celebration of Yiddish Choral Music
Zingt! vividly shows how dramatic choral music can be in the hands of a conductor-arranger like Binyumen Schaechter, who has an almost operatic sense of narrative. This self-produced CD is frequently thrilling, making rich use of the palette provided by a chorus of more than 40 voices of the Jewish People’s Philharmonic Choir. The material is as varied as the colors Schaechter elicits from his singers. The only caveat is that the recording itself is a trifle distant and metallic (www.thejppc.org). —George Robinson

Our Way: The Barry Sisters
How original this remastered music must have sounded when Claire and Merna first recorded it in 1973. Yiddishizing pop music, they had mainstream listeners paying attention to their versions of “Troj’ns fin Regen Oif Mein Kop”/“Raindrops Keep Falling on My Head” and “Tay far Tzvay”/“Tea for Two.” Reboot Stereophonic (www.rebootstereophonic.com). —Zelda Shluker

Web Sighting
Crates of artifacts in a German church; an American soldier with a canvas—these images and others from the National Archives’ Ardelia Hall Collection on Nazi-looted art
are now accessible on Footnote’s new Holocaust site, www.footnote.com/holocaust. Footnote is a growing American history site, with pages on the Civil War and more (look for Jewish records in its collections). What makes it unique is an interactive aspect that allows paid subscribers to add photos and data to a topic or create their own pages on the site. The Holocaust site, a collaboration with the National

Desert Brides
“Every person has his own life. Only Bedouin girls have no life,” states a young woman in Ada Ushpiz’s documentary. Often forced to marry young, the women later suffer when their husbands take a second wife. The film follows several women and their husbands, who are free to keep on marrying at whim. One subject is wedding photographer Mariam Al-Quader, who shoots the gaudy, extravagant wedding ceremonies (above) that are as much a custom as the multiple marriages. Go2Films (www.go2films.com). —R.P. 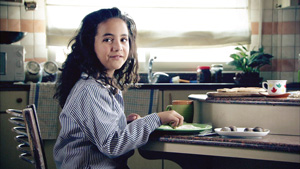 Laila’s Birthday
Director-writer Rashid Masharawi’s film is one of a number of impressive Palestinian films notable for restraint and humor in dealing with the frustrations of Arab bureaucracy and Israeli occupation. Popular Israeli Arab actor Mohamed Bakri portrays a former judge reduced to driving a taxi, a stickler for rules in the chaotic West Bank city of Ramle, as he tries to pick up a present and cake for his daughter’s seventh birthday. Kino International (www.kino.com/lailasbirthday). —Tom Tugend

A Serious Man
Larry Gopnik is the shlemiel protagonist in Ethan and Joel Coen’s latest work, which deeply mines their Jewish background in a small Midwestern town circa 1967. A modern-day Job, Gopnik’s wife wants a divorce, his son prefers smoking pot to studying for his bar mitzva, anonymous letters accuse him of unspecified misdeeds, a student is trying to bribe him to change a grade—and that’s for starters. The three rabbis Gopnik turns to provide little help. One of their best, the Coens’ film asks for nothing less than the meaning of life, with customary black humor. Focus Features (www.focusfeatures.com). —R.P.

Cycles
Frida, who escaped Poland with her family before the Nazi takeover, wanders Paris in search of her dead husband. Meanwhile, her children’s lives are splintered by divorces, affairs and strained contacts with their own children. French director Cyril Gelblat’s debut feature reveals how a complicated family deals with issues of the past and the connections between generations. 6 Phalanges Films (https://en.unifrance.org). —R.P.

My Führer: The Truly Truest Truth About Adolf Hitler
With the Thousand-Year Reich crumbling, Hitler’s henchmen figure that only
a fiery speech by the Führer on New Year’s Day 1945 can rouse the German
masses and turn the tide. But Hitler is in a funk, and only the great acting coach Adolf Grunbaum—a Jew currently residing in a concentration camp—can restore the dictator to his old form. In this outrageous fantasy, writer-director

Dani Levy proves that the satirical pen is mightier than the Nazi sword, at least on the silver screen. First Run Features (www.firstrunfeatures.com). —T.T.

The Investigation Must Go On
There is a lot of humor in this Israeli film by Marek Rozenbaum. But the leavening is buried when a rising police officer persists in brutally interrogating a former singer for robbery and murder. Pride, ambition and desire lead to tragedy. Transfax Film. Sisu (www.sisuent.com). —S.A.

At YIVO Online, (Food) Class Is in Session