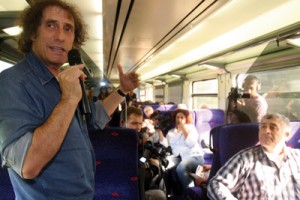 The Science Express
Israeli trains may not provide the fastest commute in the world, but they certainly offer the most intellectually stimulating ride. Since last November, passengers on various Israel Railway lines have enjoyed free lectures by top-ranking professors as part of the Hebrew University of Jerusalem’s monthly “Scientists on the Train” lecture series, ongoing this year on select trains.

“The time passed so quickly—it was fascinating,” said commuter Racheli Keinan of Kibbutz Eilon after hearing neuroscientist Idan Segev (right) discuss optogenetics, a state-of-the-art field that may enable correction of brain malfunctions such as Parkinson’s disease, epilepsy and even depression. Keinan was one of about 50 passengers who heard Segev’s talk on the 9:25 A.M. from Tel Aviv to Haifa on February 1.

“The idea is to bring university research to people who would not otherwise have a chance to hear about it,” explained university spokesperson Orit Sulitzeanu, one of the initiators of the series, which kicked off with a lecture on Einstein’s love letters by university president emeritus Hanoch Gutfreund. —Leora Eren Frucht

It’s Hip-hip-hooray For Israel
Israel has a surplus of hippopotamuses. That’s right, hippos. Ramat Gan Safari (www. safari.co.il), just outside Tel Aviv, has become a breeding paradise for the large, water-loving beasts—the herd has swelled from 5 to 40 in the last few years—and the zoo is now seeking homes abroad for their growing population. Thought to be the world’s only hippo exporter, sabra hippos have been shipped to zoos from Ukraine to Vietnam.

“It’s a wonderful sight to see these animals in such a huge herd soaking in the water,” said Amelia Turkel, a zoologist and the safari’s curator. But such a large herd, considered the largest number of hippos in captivity anywhere, is not cheap to feed. Each animal devours 15 pounds of cattle pellets and 44 pounds of hay each day.

But sending them on their way is not an easy task. To catch them they must be taken by surprise at night and shot with a tranquilizer gun. They are then moved by bulldozers into crates to be transported by air (if they are light enough) or by sea to new homes around the world. —Dina Kraft

Divine Downloads
The word of God is now audible to contemporary ears.

The 1985 Jewish Publication Society’s English translation of the Bible has been recorded in audio format by JBI International (formerly the Jewish Braille Institute), with 60 hours of readings. Narrators include stage, television and radio personalities, authors and teachers such as Theodore Bikel, Tovah Feldshuh, Rabbi Harold Kushner and nine others. Actor Elizabeth London, one of the narrators, says she tried to make the material as “fascinating and compelling as literature” and that the biggest challenges for her were the pronunciation of names and the dramatic choices of how to convey the “proverbial voice of God and the strong men’s stories.”

Free podcasts of the weekly Torah reading are available at www.jewishpub.org/books/audiobible. The complete audio Bible can be purchased through JPS, Audible.com and iTunes, and can be borrowed through many public libraries. JBI (www.jbilibrary.org) is offering the entire recording free to blind and visually impaired individuals. —Rahel Musleah

‘A Way Forward’ for Soldiers’ Bereaved Siblings
When Sgt. Tzadok Debby was killed in a 1978 accident, mourners told his brother Eli, then 17, to care for his parents. They ignored the boy’s own trauma. “At the shiva,” said Debby, now a marketing specialist in Haifa, “no one related to me.”

In 2007, Debby formed L’Netzach Achi (My Brother Forever), a support group for siblings of Israeli soldiers who fall in the line of duty. In October 2009, the organization opened an office in Haifa. It also has branches in Holon, Hod Hasharon, Modi’in and Netanya.

More than 4,000 people are members, but all bereaved siblings can express their feelings on the group’s Web site (www. brothers.org.il).

Debby estimates that the 22,300 soldiers killed since 1948 left behind 60,000-plus siblings, most outside the Ministry of Defense’s embrace of bereaved parents. Debby said that efforts to form a sibling-centric group within the ministry or the national Yad Lebanim (Sons’ Memorial) organization have failed.

“The day my brother was killed I lost my identity,” he said. “L’Netzach Achi provides a new identity: commemorating the fallen person and providing a way forward.” —Hillel Kuttler

Soldiering on Against GI Disease
GI Joe turned 100 last September. Not the Hasbro action figure, but Dr. Joseph Kirsner (right), a real-life soldier in the battle against gastroenterological illnesses.

A pioneering physician who helped transform gastroenterology into a respected science through research and writing (over 800 papers and 15 books) and trained over 200 specialists worldwide,
Dr. Kirsner is the subject of a new biography by Dr. James Franklin. GI Joe: The Life and Career of Dr. Joseph B. Kirsner (University of Chicago Department of Medicine) traces Dr. Kirsner’s origins as the son of Russian Jewish immigrants, details his study of inflammatory bowel diseases (colitis and Crohn’s), genetics and nutrition and tells of his great compassion for patients that included King Hassan II of Morocco.Dr. Kirsner has cofounded five GI societies, received almost every award in the field and has been on the faculty of the University of Chicago Medical Center since 1935. He is currently Louis Block Distinguished Service Professor of Medicine and comes to work twice a week to correspond with researchers on personal and scientific matters.  “I’m full of enthusiasm,” Dr. Kirsner says. “Here I am at my desk. The Lord has blessed me with a still-active brain.” —R.M.

A Tree That Teaches
Aliyah Finkel of Brookline, Massachusetts, was researching her bat mitzva trip to Amsterdam when she discovered that the Anne Frank House and its sister American organization, Anne Frank Center USA (www.annefrank.com), were donating saplings from the slowly dying horse chestnut tree (above) that stands outside the hideout at 263 Prinsengracht to American sites dedicated to fighting intolerance, injustice and discrimination. She approached the mayor of Boston, Thomas Menino, with a plan for a “Liberty Tree” to bloom on Boston Common.

The site is one of 11 chosen to intertwine Anne’s story with their own missions, using the tree as an icon of tolerance. The other 10 saplings from the aging 150-year-old tree will be planted at the White House; the Children’s Museum of Indianapolis; Sonoma State University in California; Southern Cayuga School District in New York; Washington State Holocaust Resource Center; Central High School in Arkansas; Holocaust Memorial Center in Michigan; Idaho Anne Frank Human Rights Memorial; the William J. Clinton Foundation in Arkansas and the National September 11 Memorial and Museum in New York.

The saplings will be quarantined for three years before being planted. —R.M.