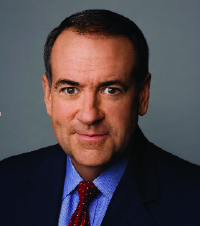 Governor of Arkansas. Presidential candidate. Pastor. Host of an eponymous Fox News television political talk show—where he jams on his bass guitar with guest rockers. Mike Huckabee, 52, has a growing résumé—will the next entry be Republican presidential nominee? In February, he brought a group of 200 American tourists to Israel, where he also sat down with Israeli officials.