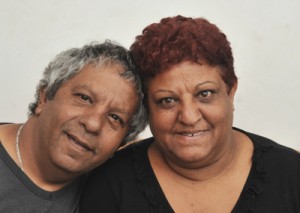 The last remnants of the Jewish community in Yemen are finally leaving the country, and those who left long ago are ready to welcome them with open arms.

The closest that Azri Sharabi has ever gotten to Yemen was when he was in the Israeli Navy over 30 years ago. “We were patrolling in the Red Sea,” he recalls. “Suddenly, there were my roots, just 300 yards away on the shoreline!”

Sharabi was born in Israel 58 years ago, but Yemenite is a key strand of his identity, along with Israeli and Jewish. His parents left Yemen in 1938, yet he, like all of Israel’s Yemenite Jews, feels connected to the remnants of their 2,500-year-old Jewish community, now struggling to leave Yemen. He has no relatives or acquaintances among them, he says, but “they’ll want for nothing in Israel. We’re all here for them.”

Will the new arrivals feel as close to the Sharabis and others in Israel’s 360,000-member longtime Yemenite Jewish community? “They will recognize our food and our music,” says Sharabi’s wife, Shoshi, 49. “They will feel at home in our community and our synagogues. But there will be many things that will make them uncomfortable.”

One of those things is Shoshi herself. Instead of a life restricted to housekeeping and childbearing, as is traditional in Yemen, she has held a job for the past 15 years. Another is her 17-year-old son, Oded, a self-assured teen whose kippa(when he wears it) perches on top of hair twisted into long, black dreadlocks. And a third is her vivacious daughter, Adi, 19, who wears pants, confidently handles an M-16 and is currently education officer to a paratrooper unit in the Israel Defense Forces.

As fiercely as Israel’s Yemenite Jews hold to their ethnicity, they have evolved during the past 60 years from a traditional religious society to one that is modern and primarily Western. For many of the 380 Jews still in Yemen, secular Western society is scarcely less threatening than the intensifying violence and anti-Semitism they face. The result: 56 of the 100 Jews brought out of Yemen in the past year, urged by North American ultra-Orthodox Jews, have chosen refuge in Ashkenazic Monsey, New York, rather than in Israel.

“There is nothing wrong with the United States, but Israel is the Jewish home,” says Eli Cohen, director general of the Jewish Agency’s Department of Aliyah and Absorption.

It is the Jewish Agency, alerted by Karma Feinstein Cohen, executive director of the Zionist World Magshimey Herut youth movement, that is covertly bringing the last Jews of Yemen to Israel. “Late in 2008, a man walked into my New York office,” says Feinstein Cohen. “He said: ‘I need help. I’m from Yemen. I have family there.’” She contacted the Jewish Agency and, for the next year, found herself mediating between the agency, ultra-Orthodox groups in the United States and Yemenite Jews in and outside of Yemen.

Most Yemenite Jews (some 50,000 people) left for Israel in Operation Magic Carpet, from June 1949 to September 1950—but a handful stayed behind. They and their descendants are today under the official protection of Yemen’s dictatorial president, Ali Abdallah Salah, barred from politics and the military but permitted to practice their faith amid a population of 23 million Muslims.

Yemen, however, has a history of lawlessness and political instability. Today, with more guns than people in the country, an Iran-backed Shi’ite insurrection in the north, separatist Sunni rebels in the south and a growing AlQaeda presence, its Jewish community is increasingly targeted. On December 10, 2008, in Raida, 190 miles northeast of Aden, a former Yemenite Air Force officer pumped five bullets into a man shopping in the market, screaming: “Convert or die, Jew!” The victim was Moshe el-Nahari, a Hebrew teacher and shohet, father of nine and brother of the local rabbi. “When el-Nahari was murdered for being a Jew, it was clear to the community that it was time to leave,” says Cohen. “They turned to us.”

The first 11 landed at Ben-Gurion Airport in Tel Aviv on February 19, 2009. Among them were Sayid Ben Israel, his wife and seven children. A hand grenade had been lobbed into their yard in Raida shortly after el-Nahari’s murder.

“I felt I was witnessing history,” says Arielle di Porto of the Jewish Agency, who met the newcomers at the airport. “And it wasn’t only me. Everyone, from the customs officials to the baggage handlers, welcomed them with joy.”

They had little luggage, she says, but they brought the large clay oven they use for heating and baking bread. “The boys and men had long peyot and were in Western clothing,” she says, “but the women wore headscarves and long robes, which made them look more Muslim than Jewish.”

Whatever their appearance, these are not the Yemenites of Operation Magic Carpet who famously started a fire on the plane to warm themselves. These newcomers are clear about their needs. First among them is an ultra-Orthodox lifestyle; second is owning a home. Third is avoidance of all publicity and a blanket refusal to meet with journalists.

Their arrival is starkly different from that of Azri Sharabi’s father, who is now 100 years old. “In 1911, when I was 2, my family packed their belongings on donkeys and set out for Eretz Israel,” Nathan Sharabi says. “Along the way, we met a friend of my father who said there was no work or food there, so we turned back. When I was 28, I tried again with my wife, Miriam, and my widowed mother, Leah. We walked to Aden and then found a ship. At sea, there was a terrible storm, they said, but I slept through it all. We docked at Haifa, and they sent us to Rishon le-Zion, near Tel Aviv.”

Rishon, seven miles southeast of Tel Aviv and Israel’s fourth largest city with a quarter-million people, is one of many Israeli towns with a Yemenite Jewish community. “In Yemen, we would grow fiber, weave it into cloth and sell it in the market,” continues Sharabi. “In Rishon, I scraped [to make] a living…. I would carry heavy loads for people. It wasn’t always safe. There were Arabs on the road, and I was sometimes shot at. I would earn pennies, not always enough for food. I would search the streets for a discarded loaf.”
In their tiny home, Nathan and Miriam raised five children, of whom Azri is the youngest. For the past nine years, since Miriam’s death, Nathan has lived with Azri and his family, “and in all that time I’ve never heard him speak a critical or discontented word,” says Shoshi.
Nathan is a Baba, or holy man. “When I was a child, I sometimes felt he didn’t listen to me,” says Adi. “Later, I realized he was on another sphere and didn’t hear me.”

Azri and Shoshi are traditional, rather than Orthodox, in their religious practice, and their children’s observance is even more diluted. Does Baba Nathan regret leaving Yemen and raising generations who are increasingly secular? “I am Israel’s child,” he says. “My deepest links are here. I’m proud of my children and my grandchildren, even though our ways are different. They are part of me, and I am part of them.”

“Growing up with my grandfather has meant growing up with Jewish tradition,” says Oded. “I’m an Israeli citizen of Yemenite Jewish culture. I feel no conflict between these identities. My friends, too, are mixtures. That’s the way it is in Israel.”

Adi, likewise, feels herself a seamless combination of Yemenite, Israeli and Jewish. “All of these have built me and made me who I am,” she explains. “I value the rich culture I come from, from its food to its literature, and I will pass it on to my children, even if their father is not Yemenite.”
Her boyfriend of over a year is a kibbutznik of Polish-German descent. “I think his family considers me slightly exotic,” she says, smiling. “But we’re both Israeli and we both come from warm, liberal and open families.”

One very conspicuous change that aliya has imposed on Yemenite Jews is family size. “I would have liked more children, but our home is tiny,“ says Shoshi. “It’s no longer our parents’ day, when you put three children in a bed and 10 children in a room. As it is, Oded and Adi share a room, and I’m unhappy about that, but Azri doesn’t want to owe anyone anything, so we’ve stayed in our small house.”

Azri is a sanitation worker and Shoshi is a cleaner. “There’s no shame in being a cleaner, but the work is hard and the pay not great,” she says. “I want my children to have more. We’ve worked to give them tools to go further. Now it’s up to them.”

It has taken the Sharabis two generations to force wide the doors of opportunity. The Yemenite Jews who came to Israel in the 1930s and 1940s arrived without modern education, ill prepared for life in an industrial state. Their strong work ethic and willingness to take low-level jobs have enabled their children to be teachers and administrators, engineers and programmers, artists and musicians, doctors and lawyers—without diminishing their Zionism.

“Everyone in my class is looking ahead to our military service, to serving in combat units to defend our state,” says 12th-grader Oded.

“You do not always get what you want in the Army,” explains Adi, who began her two-year service last summer. “You do what the Army wants, because it protects the country you love. My responsibility is soldiers whose education got sidetracked. I organize outings and theater trips for them, lectures on current affairs, drug and alcohol abuse. Ours is the only Army in the world with an Education Corps like this that ensures conscripted soldiers come out better citizens. We are aware that the Army is built of people, and that it can build people as well. It was not my dream Army job, but I have come to love it. I believe I am making an important contribution.”

The 44 newly arrived Yemenites (including five of the children of the murdered Moshe el-Nahari; their mother remains in Yemen fighting for punishment of the murderer) and those still to come will likely follow a very different path from the old-timers’. Theirs will lead directly into the Ashkenazic-flavored, often anti-Zionist, ultra-Orthodox world, which they see as closest to their own unique religious tradition.

The Ben Israels, the only newcomers to have left the absorption center, have moved to a haredi neighborhood in Beit Shemesh where the Jewish Agency will help them buy a home. Their children are in ultra-Orthodox schools and Sayid, a teacher in Raida, is teaching in Beit Shemesh. His wife cares for the home, still clothed in her long robes.

“Everyone’s entitled to live their own lives,” says Azri Sharabi, mildly. “What’s important is that we respect one another.”

“The people coming here are young families with their whole lives ahead of them,” says Cohen. “Israel is their home as much as it is the home of every Jew. There is no reason they won’t flourish here.”