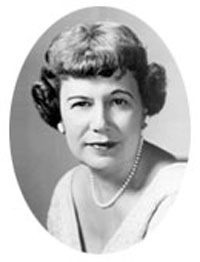 Hadassah Magazine mourns the passing of Charlotte Jacobson, one of the towering figures of the Zionist movement, who died May 14 in Florida. In addition to serving as Hadassah’s national president from 1964 to 1968, over the course of the past 60 years she occupied a vast range of key positions in the American and world Zionist leadership.

Jacobson served as Hadassah’s president during the momentous period of the Six-Day War in 1967. After the fighting stopped, she was able to reclaim two key pieces of ground in Jerusalem that Hadassah had lost 19 years earlier, during Israel’s War of Independence: the Hadassah Hospital on Mount Scopus and the gravesite of Henrietta Szold, Hadassah’s founder, on the Mount of Olives.

One of the influential posts she held after her presidency was chair of building and development for the Hadassah Medical Organization. In that capacity, she supervised the rebuilding of the Mount Scopus hospital as well as the building of the Moshe Sharett Institute of Oncology.

Born into a Zionist family in New York, Jacobson grew up with the movement to create a Jewish state. She made her first visit to Israel in 1951, three years after independence.

She traveled the world in defense of Jewish rights, meeting with refuseniks, facing commissars in the Soviet Union and advocating freedom of worship and emigration in front of the leaders of Syria and Egypt. She also defended Israel and the Jewish people in the halls and overseas conferences of the United Nations. Her observations about Jewish life in the Soviet Union and her visit to China were published in Hadassah Magazine, which she chaired.

Within Hadassah, she held a wide range of leadership positions. Among many other posts, she served as chair of the Hadassah College of Technology (today Hadassah College Jerusalem). She chaired the Young Judaea Alumni Association, the committee to observe the Zionist movement’s 100th anniversary and the Jerusalem 3000 Special Events Committee. She was responsible for the first USAID grant of $1 million to Hadassah in 1968.

She was also a longtime member of Hadassah’s national board and a mentor of Kibbutz Ketura, where a building and plaza bear her name.

Charlotte Jacobson was a leader for all seasons. Hadassah mourns her today, but we know that generations after we are gone our descendants will know her name and benefit from its blessings.