Inside Hadassah: Miracles of Environment, Empowerment and Health

Chaim Weizmann, Israel’s first president, once said, “Miracles sometimes occur, but one has to work terribly hard for them.” We agree, so this month we applaud miracle workers like the Hadassah scientists who have created a new method of growing greater numbers of stem cells that can be used for researching new methods of combating disease. We recognize, too, our Young Judaean dancers and the Hadassah chapters whose creative ideas and hard work make life healthier and safer for others. Yasher koah, and now let us celebrate more Hadassah miracles at our national convention in Florida July 25 to 28. I look forward to seeing you there! —Ruth G. Cole 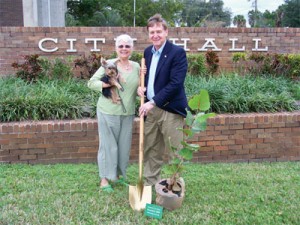 In February 2009, Hadassah Magazine produced an entire issue dedicated to going green, and members in Florida answered the call.

Lois Felder, who in December 2009 was presidium president of the Brevard County Chapter in Melbourne, Florida, was impressed by the issue, and when asked to chair the chapter’s Hanukka party, she set out to green the Festival of Lights. Other chapter members preferred the traditional party, but Felder would not be deterred.

“You’ve got to be creative,” said Felder, shown at right with Titusville Mayor James H. Tulley Jr.
She had contacted the mayors of all 14 cities in Brevard County and received proclamations that December 2009 was officially Hadassah Goes Green Month from the mayors of all but one. Every city held a tree-planting ceremony with indigenous trees—a total of 22 trees were planted. In only 13 days, the trees were in parks, at synagogues, at the Jewish Federation of Brevard County and at Joe’s Place in Melbourne, where Jewish war veterans meet. Accompanying the trees were small, donated signs that credited the Brevard County Chapter. Along with the trees planted in Florida, the chapter also sold 226 Unity Tree certificates for Coco Beach’s sister city in Israel, Beit Shemesh. They also distributed nearly 150 Hadassah Goes Green reusable tote bags.

The chapter hosted an environmental awareness event at Temple Israel in Viera. The Brevard Zoo Education Program came to the synagogue and presented native animals; participants learned the importance of indigenous plants and recycling. Children took part in a poster contest, creating drawings and messages on green themes.

“Kol Hakavod to Lois Felder, who in a most novel and creative project used Hadassah Magazine to teach an important lesson to her community as well as enhance the environment in that community, and—most significantly—plant trees in Israel,” said Deborah Kaplan, past national president and current Jewish National Fund chair. “Both children and adults benefited from her unique efforts.”

Since 1926, Hadassah has been a major partner with the Jewish National Fund in enhancing the State of Israel. JNF and Hadassah are committed to the redemption, reforestation and building of the Land of Israel as well as improving its environment. 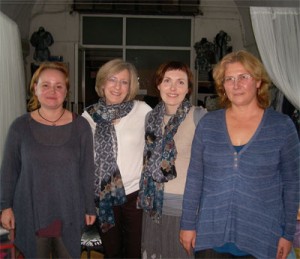 Lena Gurary, executive director of Supportive Community Women’s Development Center in Israel, is this year’s winner of the Bernice S. Tannenbaum Prize, which recognizes innovative contributions to advance the status of women and girls in Israel and the United States. The ceremony was scheduled for Monday, June 7 at UJA-Federation of New York.

Gurary ( second from right), born in Uzbekistan, began Supportive Community in 2003 with three other businesswomen from the former Soviet Union. Propelled by their feelings of marginalization in the business world, their organization helps women become microentrepreneurs.

In the seven years since its founding, Supportive Community has aided more than 5,000 women—secular and religious, Jewish and Arab—in starting their own businesses, dealing with tax authorities, bank loans and business accounts. The prize, named in honor of former Hadassah national president Bernice S. Tannenbaum’s lifetime of service to the State of Israel and Hadassah, carries a $2,500 award, which Gurary plans to use to spend two months in New York improving her English and volunteering at a nonprofit organization.

The Young Judaea Israeli Dance Troupe has performed at the festival every year since its inception. The event brings together Israeli dance groups from across the United States, and this year the Israel Dance Institute honored Young Judaea and committee member Bob Levine, a Young Judaea alumnus.

Be Tech-Savvy and Safe

Today’s teenagers are tech-savvy, but Hadassah of Greater Baltimore wants to caution their parents that cyberspace harbors no secrets.

Last winter, the chapter launched a two-part session on risky technology behavior. Cellular phones doubling as cameras combined with Internet access and text messaging mean that embarrassment awaits but a few minutes and keystrokes away, experts told parents at the event. Even information and photographs posted innocuously on Facebook are seen by high school and college administrators, with potential repercussions.

The presentation is the latest in the chapter’s series addressing issues affecting teens and follows sessions on self-image, stress, communication and peer pressure. The series earned the chapter a 2008 Hadassah National Award for Overall Excellence in Women’s Health Programming.

“We want parents to be aware—and tell their kids—that there is no privacy,” said Barbara Berg, the chapter’s health education coordinator. “Once something is up there online, it’s up there, even if you erase it. If you’re not aware of it, you can’t educate your kids.” —Hillel Kuttler

Hadassah’s Doctors—Moving Research Forward
The advancement of stem cell therapy, with its potential to ease and even heal dozens of currently incurable diseases, has been brought considerably closer by a technology developed at the Hadassah–Hebrew University Medical Center in Ein Kerem.

Scientists at Hadassah’s Human Embryonic Stem Cell Research Center have created a new method that enables the growth of the large numbers of human embryonic stem cells needed to move research forward and underpin new treatments. Their work was reported in the March issue of the respected journal Nature Biotechnology.

The research was part of a postdoctoral study undertaken by Dr. Debora Steiner, together with many other researchers at the research center.

“It’s been incredibly exciting for me to have had an opportunity to contribute to the effort toward exploiting the enormous potential of human embryonic stem cells,” says Dr. Steiner. Born in Buenos Aires, she has lived in Israel for the past 15 years. “We hope to continue along this path. Using protocols developed in our lab at Hadassah, we are currently trying to convert the stem cells we have generated into a range of specific cell types.”

Stem cells derived from human embryos have proven the most promising for ripening into specific cells needed to repair the body’s tissues and organs. These stem cells are grown in the laboratory—until now, as a single-cell layer on a bed of feeding cells or nutrients in a labor-intensive process that produced a relatively small number of cells. Abandoning the single-layer process and “allowing these cells to cluster into floating aggregates would, according to conventional wisdom, prevent them from multiplying as stem cells and start them differentiating chaotically into any of the body’s 220 cell types,” says Dr. Reubinoff.

Five years ago, his team learned to control the chaotic differentiation process in floating clusters and derived primitive brain cells from human embryonic stem cells. They noticed, however, that under the specific culture conditions they developed, many stem cells failed to differentiate. It is this finding that has steered the doctors’ current research.

“Our research is an important step toward developing an automated, controlled process that produces the large quantities of cells needed for transplantation in millions of patients as well as for use in industry and research,” says Dr. Reubinoff. —Wendy Elliman