Book Excerpt: Who by Fire, Who by Water 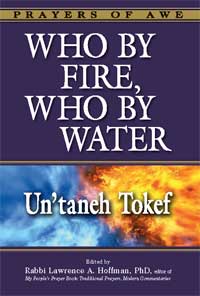 Only when I spend the High Holy Days outside of Israel do I realize that there is something unique and incomparable in the way they are experienced back home, especially in the case of Yom Kippur. I don’t mean the car-free streets and the dramatic quality of the day’s eerie stillness. Ask Israelis for the first thought that pops into their minds when they hear the words “Yom Kippur” and at least half of them will say without hesitation, Milkhemet Yom Kippur (the Yom Kippur War.) Even now, almost four decades later, the war that began with a surprise attack coordinated by Egypt and Syria on the afternoon of Shabbat Yom Hakippurim, October 6, 1973, remains a traumatic and painful memory in the Israeli psyche. In no other war was the existential threat to Israel so tangible. The fragility of the young state was never felt as substantially and concretely as in that Yom Kippur War, the fourth great war in Israel’s history.

The memories of men rushing headlong out of synagogues, grabbing their kit bags, speeding to their military units, and leaving anxious spouses and bewildered children behind will remain engraved in the shared consciousness for a long, long time to come. I remember well the look my parents exchanged as the emergency siren interrupted the serenity of the day. My father ran to the attic to get his military gear and then magically disappeared to join his unit by the Suez Canal. Even when he eventually came back safe and sound and life went back to normal, my childhood at age seven was never again complete. Something essential was lost forever.

The 1973 war symbolized the end of an era, the sudden evaporation of the euphoria that the Six-Day War had occasioned only seven years earlier (1967). The words of Un’taneh Tokef—“Who will live and who will die, who at their end and who not at their end, who by fire and who by water, who by warfare and who by wildlife” (lines 15-17)—acquired newly relevant meaning. Yom Kippur became a day of self-examination (cheshbon hanefesh) in ways one could never have imagined.

Ancient Words, Contemporary Music
The best entry into the Israeli experience of Yom Kippur is through a setting of Un’taneh Tokef by Yair Rosenblum (1944-96), a celebrated Israeli composer, known best for the songs he wrote for military bands (like the popular Shir L’Shalom, “Song for Peace”). In 1988 he was invited to serve as musical director for the sixtieth anniversary of Kibbutz Beit Hashitah, where he remained for three years. During his stay there, Rosenblum was exposed to a memorial ceremony that had taken place in the kibbutz every Yom Kippur evening since 1944 (on Yom Kippur day, the kibbutz held an public gathering to discuss internal and national questions). The ceremony’s eventual crystallization in the eighties featured two kibbutz membvers, Shula and Hanoch Albalack, singing traditional Yom Kippur liturgical poems (piyyutim).

Touched by the memorial service, especially the treatment of the eleven kibbutz members and sons who had lost their lives in the Yom Kippur War, Rosenblum composed a new setting for Un’taneh Tokef, blending motifs from Ashkenazi and Sephardi traditions with Israeli folk music. It was first performed by Hanoch Albalack in 1990. The composition was intended as an intimate tribute to the Beit Hashitah victims lost in the war. No one could imagine that it would eventually become virtually an official piyyut of the High Holy Day season.

Rosenblum’s Un’taneh Tokef exemplifies the relatively recent phenomenon of grassroots cultural and religious revival. Arye Ben-Gurion, the founder of the collective kibbutz archives and a well-known pioneer in reclaiming Jewish traditions and refashioning them for contemporary Israeli needs, recorded it. The tape passed from hand to hand and received widespread initial recognition even before it got to the radio. Additionally, a moving documentary film (directed by Yehuda Yaniv) chronicling the mourning ceremonies at Beit Hashitah reconstructed the song’s composition and its initial performance.

During the film, Rosenblum repeatedly expressed his fear that the work would not be accepted by the ideologically secular kibbutz members. But surprisingly, the musically complex and theologically challenging piyyut was greeted warmly, not just in Beit Hashitah (where it became the concluding and most elaborate part of the Yom Kippur ceremony), but throughout Israel. Rosenblum’s Un’taneh Tokef is now a standard component of radio broadcasts and ceremonies marking the High Holy Days. More surprising is the fact that through the secular media, his Un’taneh Tokef has radiated beyond the kibbutz world into synagogue services, some of them Orthodox, as part of their Rosh Hashanah and Yom Kippur liturgy.

The Theology of Rosenblum’s Un’taneh Tokef
Rosenblum’s piece embodies at least three realms of meaning: the Jewish, the Israeli, and the human, corresponding to the historical, the local, and the existential.

The Jewish (or historical) realm derives not just from the liturgical text itself but from the medieval account of the sufferings of Rabbi Amnon of Mainz, a tale taught in every Israeli elementary school and accepted by many as historical truth. The torments of Jews throughout the generations, as embodied by his anguish, are present wherever the piyyut is heard.

The Israeli (or local) realm is informed by the context of Rosenblum’s work: the trauma of the Yom Kippur War. It couples the emotional proximity of the lofty yet ambivalent experience of the Day of Atonement for non-Orthodox Israeli society with specific memories of the war. Not so incidentally, the term Yamim Nora’im, “Days of Awe,” can be understood in modern Hebrew as “days of terror” or “of horror.”

Yet what gives Rosenblum’s piece its fullest measure of significance is its treatment of the human (or existential) realm, its resonance with the fragile and uncertain nature of the individual. The composer excludes the final and most accentuated passage of the piyyut, a comforting affirmation of God’s infinite greatness, “But You are king, the living and everlasting God” (line 31) and ends instead with disturbing images of the existential human state: “[Man is] like shattered pottery, like withered grass and like a faded blossom” (lines 28-29). Interestingly enough, Rosenblum composed his piece in the later years of his own life, when according to some, he knew he was suffering from an incurable disease. His Un’taneh Tokef thus stands also as a personal requiem of a man who was reminded of his numbered days on earth.

Un’taneh Tokef and Religion in “Secular” Israeli Society
I can think of few liturgical pieces as popular as this one in Israeli society—a remarkable fact, given how challenging the text and music are. The choice of Rosenblum, a “secular” composer, is significant here.

Since the establishment of the State of Israel (actually, already from its early political Zionist roots), there had been a clear separation between the “religious” (the Orthodox [dati] and ultra-Orthodox [charedi]) and the “secular” (chiloni). The notion of being religious but not Orthodox has therefore always been hard for most Israelis to fathom, even today, and all the more so in the early nineties. The”secular” majority entrusted the “religious” (the only form of religion imaginable then) with the task of preserving Jewish values, education, and texts (with the exception of the Bible, which played an important role in Zionist narratives). This implicit agreement left no room for the creation of alternative (non-Orthodox or ultra-Orthodox) forms of Israeli Jewish religion.

The Zionist chalutzim (“pioneers”) deliberately and consciously left the realm of the synagogue, as a matter of ideological conviction, but they had been sufficiently educated in traditional Judaism to know what they were leaving. By contrast, their children and grandchildren usually lack the knowledge necessary to make informed choices. This is not to say that Israelis are uninterested in religion and spirituality; on the contrary, the rate of young Israelis who experience Eastern and other forms of alternative religion is very high. But the bifurcation of society into “religious” and “secular” had the consequences of depriving native-born Israelis of their legitimate Jewish roots. They may be aptly compared to the fourth son of the Passover Haggadah, who does not even know what to ask.

The last two decades (and especially since the assassination of Israel’s Prime Minister Yitzchak Rabin in 1995) have witnessed a growing Israeli interest in Jewish texts and heritage. I do not mean the phenomenon of becoming a ba’al t’shuvah (becoming “religious”), but rather a bold and fresh consideration of a new Israeli form of religion that is not Orthodox or ultra-Orthodox through informal or semi-formal study and even through experimental worship groups. This identity search is still a rather elitist phenomenon, touching the lives of intellectuals and the affluent in particular, but it is expanding to wider circles. However, new musical compositions and new settings for classic piyyutim and liturgical texts become more and more popular in the wider Israeli scene. The centrality that Un’taneh Tokef has acquired even within secular Israeli society is an example of this phenomenon.

Rosenblum’s decision to omit the last passage of the piyyut (“But You are king, the living and everlasting God”; line 31) might suggest that he saw the prayer as a fully secular statement of life’s uncertainties and the gloomy fate of the individual. But I don’t think that is the case. Rosenblum did omit explicit treatment of God, but he confronted the poem’s central claim of the entire world being judged, along with the theological concept of providence. He did not omit the central sentence, “And repentance, prayer and charity help the hardship of the decree to pass” (line 21)—which is nothing if not a religious claim.

Rosenblum reclaimed the traditional text but tore it loose from its traditional context. I am not sure that the listeners of this piece always realize it, but it seems to me that beyond its artistry, this may explain the popularity of the composition in nontraditional (secular and liberal religious) society. But it has made its way also into many traditional synagogues, evidence of something altogether novel for Israel: the impact of the so-called “secular” on the “religious.”

Un’taneh Tokef is a remarkable illustration of the way Israeli Jews are struggling to make peace with their past, to understand their present, and to guarantee their future by reclaiming traditional texts in new and innovative ways.

Excerpted from Who by Fire, Who by Water: Un’taneh Tokef

, edited by Lawrence A. Hoffman. Reprinted with permission of Jewish Lights.

Click here to read a review of Who by Fire, Who by Water—Un’taneh Tokef.