Brief Reviews: Women in All Their Diverse Glory 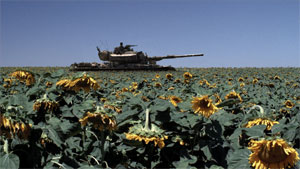 Samuel Maoz portrays the terror of four young tank soldiers in the First Lebanon War. The action is either inside the tank or seen through a scope, the claustrophobia and discomfort heightened by the tank’s deafening metallic screeching. The landscape of fear—of kill or be killed—is relieved by the Israeli brand of humor (and chutzpa). This is a powerful film with fine acting and directing. Sony Classics Films (www.sonyclassics.org). —Zelda Shluker
A Film Unfinished
It wasn’t until researchers viewed the fourth reel of a film newly discovered in East German archives that they realized it was made for Nazi propaganda. Shot in the Warsaw Ghetto in May 1942, corpses on the sidewalk are juxtaposed againt pushcarts piled with produce, starving people with dancing restaurant patrons. The narration—from the diaries of the Jewish ghetto head, an interview with the film’s cameraman and the reactions of survivors—frame this indelible portrait of cruelty. Directed by Yael Hersonski. Belfilms (www.oscilloscopepictures.com). —Susan Adler

Ahead of Time
It was photojournalist Ruth Gruber’s images in LIFE magazine that roused the world to demand that the Exodus refugees be returned to Palestine. This extraordinary woman went to Germany in 1931 to earn her Ph.D. at age 20; covered the Anglo-American Committee of Inquiry on Palestine for the New York Post; accompanied the UNSCOP as a correspondent for the New York Herald; and, ultimately, dedicated herself to rescuing Jews worldwide. The film is narrated by the grand dame herself. Produced by Zeva Oelbaum (www.ruthgruberthemovie.com). —Judith Gelman MyersBroken PromiseJiri Chlumsky’s near-epic film, adapted from Martin Friedmann’s autobiography, follows Slovakian-born Friedmann into a labor camp, a tuberculosis sanatorium, a monastery and the life of a partisan. Despite the anti-Semitism of his countrymen and the Nazi invaders, he never lost his humanity. Genta Film (www.filmneweurope.com). —Renata Polt

Joan Rivers, born to Russian Jewish immigrants, was way ahead of Sarah Silverman as a potty-mouthed-female comedian. Ricki Stern and Annie Sundberg’s cinéma verité-style documentary follows Rivers for a year, beginning with her 75th birthday, and includes scenes from nightclub and stage appearances. The high energy actor endures red-eye flights and 6 A.M. makeup sessions in her quest to keep working, while cracking wise about abortion, sex and Osama bin Laden. Never dull, but the film does not touch on her early life. IFC Films (www.ifcfilms.com). —R.P

Florida Jews in the Military
Long before Florida attained statehood in 1845, Jewish settlers played a prominent role in military activities in the state, distinguishing themselves as patriots and courageous soldiers and never forgetting their heritage. Using biographies, photos and artifacts of nearly 300 men and women, the exhibit is a model of what a small institution can do to highlight overlooked Jewish contributions to American history. Through September 12 at the Jewish Museum of Florida in Miami Beach (www.jewishmuseum.com). —Stewart Kampel

The Morgenthaus: A Legacy of Service

Letters, photos, an appointment book and a tea set are among the artifacts chronicling the lives and contributions of three historic members of the Morgenthau family. Henry Morgenthau Sr. was United States ambassador to theOttoman Empire from 1913 to 1916. His son, Henry Jr., served as secretary of the treasury under President Franklin D. Roosevelt. His grandson, Robert (right), was the district attorney of the Borough of Manhattan in New York for 34 years. Through December at the Museum of Jewish Heritage–A Living Memorial to the Holocaust in New York(www.mjhnyc.org). —Eliot Hart

In this play-within-a-play, the cinematic version of the London stage musical of the same title compares the fates and moral courage of ancient Jews defending Masada and that of Warsaw Ghetto inhabitants during World War II. The startling but effective commentary on Jewish defiance in the face of persecution is enlivened by a romance and Shuki Levy’s musical score. PBS (www.imaginethisthemusical.com). —Tom Tugend

Blessed Is the Match: The Life and Death of Hannah Senesh

Roberta Grossman’s film about Hannah Senesh—poet, diarist and defender of her people—humanizes the woman who has been called “the Jewish Joan of Arc.” After becoming a pioneer in Palestine, she volunteered to return to her native Hungary as a resistance fighter. Though she hoped to save Hungarian Jewry, including her mother, Catherine, she was captured and executed. Photos of Senesh as well as interviews with Hungarian classmates, fellow kibbutzniks, parachutists and prisoners help explain the motivation behind the talented 22-year-old’s sacrifice (www.blessedisthematch.com). —S.A.

Bessarabian Breakdown
For decades, Jim Guttmann has been an anchor for the Klezmer Conservatory Band and accompanied the likes of Itzhak Perlman and Andy Statman. Now the gifted Jewish bassist has released his own snappy album with an eclectic repertoire ranging from dueling clarinetists on the Russian gem “Dark Eyes” to Guttmann’s own sharp melodic lines on the standout title cut. Kleztone Records (www.jimguttmann.com). —Jules Becker
Kohane of Newark: New Midlife Crisis

Ricky Orbach’s album is a minimalist, baritone-accented and jazz-inflected personal and provocative expression of life: family and rebellion against strictures; love falling apart; and a mix of the deep and the mundane (“Why the ancient people’s tales are sermonized, memorized, then infantilized/ And why the cover of my crock pot is still missing?”). Joodayoh (www.myspace.com/kohaneofnewark). —Z.S.

Easy to navigate, the YIVO Encyclopedia of Jews in Eastern Europe, www.yivoencyclopedia.org, succeeds where few other online scholarly initiatives have: It shows and not just tells about its subject of choice. A Web version of the print encyclopedia, it makes clear through its remarkable range of content and media the breadth of Jewish experience in the region. And, with portals for educators and researchers, entries go beyond detailing a rich history that includes the Enlightenment and hasidism to clarifying the influence that history has on Jewish thought today. —Leah F. Finkelshteyn

110 Roots and Puns in 'Hebrew Matters'

The Unsung 'Women of Rothschild'

On Your Shelf: September/October Must-Reads