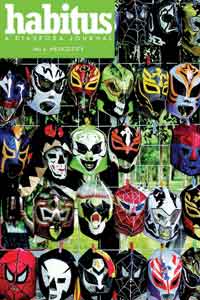 Celebrating the Diaspora
Although much of Jewish history mourns the diaspora and the Jewish people’s disbursement to the four corners of the earth, one literary journal celebrates it. Habitus: A Diaspora Journal(https://habitusmag.com) is a semiannual print magazine featuring poems, essays, fiction and photography focusing on one city per issue. Past issues highlighted Moscow, Budapest, Sarajevo, New Orleans and, most recently, Mexico City.
“The diaspora is important because it reminds us of the depth and breadth of Jewish culture in an increasingly borderless world,” said Joshua Ellison, Habitus editor. “It is an important framework that gives a universal context.”

In the past, most contributors have been Jewish and/or written about Jewish topics, but when they aren’t Jewish, the material will “resonate with Jewish readers and with certain universal experiences,” Ellison said.

Yet the upcoming issue in January—on Berlin—is different because many of the writers are non-Jews reckoning with Jewish history and Germany and the war, a conversation that is taking place all over Germany. “Even though the Jewish community is very small in Berlin today,” Ellison noted, “the presence of Jewish culture and Jewish history looms large.” —Amy Klein

Remastering a Master
For the past six years, Mendel Werdyger has lavished his devotion on dings and nicks. He has unearthed original 78s of master cantor Yossele Rosenblatt, rerecorded and digitized them, then spent an average of five hours cleaning each song so it is free of defects and scratches.

The 51-year-old Gerer Hasid from Borough Park, Brooklyn, owner of the Mostly Music online store (www.mostlymusic.com), has produced recordings but had no background in sound engineering until he taught himself the art of restoration through research and professional advice. Music runs in his blood: He is a singer himself; his father, David, also a cantor, succeeded celebrated cantor Moishe Oysher; and his brother Mordecai ben David is a popular Hasidic rock sensation.

Rosenblatt, the “Jewish Caruso” who died in 1933, had a very “emese [truthful] type of singing. He sang from the heart,” Werdyger says. “Especially in today’s virtual world, that intensity really reaches people.”

Werdyger has reintroduced Rosenblatt’s “special fire” in the series he calls Od Yosef Chai (Joseph—or the diminutive Yossele—is still alive). Four CDs have been released, and remasterings of other cantors are in the hopper.

“We removed the dust,” says Werdyger, “so the diamond can shine.” —Rahel Musleah

Over the course of almost 48 hours, 29 SWAT—special weapons and tactics—teams from all over California and the Middle East took part in scenarios such as hostage rescue reenactments, maritime and train interdictions and answering a nuclear facility threat. Participants were judged on speed, coordination with EMS units and firefighters and ease in dealing with civilians, among other criteria.

Other Middle Eastern SWAT teams taking part in Urban Shield included ones from Jordan and Bahrain.

“You are fighting in the shadows away from the spotlight, and you provided the world with a taste of your abilities and your readiness to answer the call,” Israeli Minister of Defense Yitzhak Aharonovitch told the team commander after the win. “You have placed the Israel police at the top of the world.” —Libby Barnea

Training Ground for Entertainment
An Ottoman-era train station at one end of the first stretch of railroad in the Middle East has now resurfaced as an appealing entertainment destination in Tel Aviv after standing neglected and forgotten behind high walls for decades.

HaTachana (The Station; Hebrew Web site, www.hatachana.co.il) was reopened last spring following a $27 million renovation, dazzling visitors with its 22 historic buildings set on 49 acres, some of whose interiors have become art galleries, restaurants, cafés and boutiques featuring many of Israel’s top jewelry and clothing designers.

Built in 1892, HaTachana and its rail line connected Jaffa and Jerusalem, transforming a journey previously made by camel or foot.

After the 1948 War of Independence, HaTachana was used as an Army base until the 1970s, when it was abandoned. Today, it is a place of music festivals, art exhibits, shopping and a farmers’ market on Fridays. —Dina Kraft

Finding Their Voice
As Orthodox lesbians in Israel, Sarah Weil and Talya Lev struggled to keep their sexuality secret for years, convinced that their true identities would not find harmony within their religious communities.

But then they discovered Bat Kol (Daughter of a Voice, or Small Voice), an Israeli organization for religious gay women founded in 2004 that lobbies for LGBTQ rights, provides support structures and offers social activities to its nearly 300 members.

Eventually, Weil and Lev—American olim—became leaders at Bat Kol, and this summer Lev received $10,000 from the ROI initiative of the Charles and Lynn Schusterman Family Foundation.

With the money, the pair is redesigning Bat Kol’s Hebrew Web site (www.bat-kol.org) to make its wealth of content—rabbinic responses, personal stories, Torah lessons, news—available in English. Meanwhile, the two are working on launching branches in the United States and Australia.

“It is exciting to be a part of the grass-roots international movement of Jewish women who desire to live both our religious and lesbian identities,” Weil said. “We are forging new pathways in religious Jewish communities to ensure that lesbians are able to participate fully in Jewish communal living.” —Sharon Udasin

Attention Foodies!
Even though the Internet is bursting with almost everything a home cook could need, Tamar Genger, a registered dietitian in New York, nevertheless felt it was lacking something.

“As a Jewish kosher mom who loves to eat and cook,” says the mother of three, “I wanted resources directed at me and my needs,” a site where one can search by meat, dairy and pareve and be sure everything is kosher.

Genger also sees the site, which so far has 1,000 members and gets 40,000 page views monthly, as a way to preserve Jewish heritage through the kosher tradition. “You can post your great-grandmother’s recipe to have forever online, and for others to use as well,” she adds. —Randi Sherman