Come and Play, in Israel!
Celebrate Purim this year with the lovable stars of the all-new Shalom Sesame. Be Happy, It’s Purim!, disc 6 in the series of 12 half-hour DVDs, features muppet Avigail learning about the holiday’s hero, Esther, and all the residents of Rehov Sumsum dressing up in costumes. Anneliese van der Pol hosts the shows, which are a follow-up to the beloved original series that debuted in the 1980s and introduced American kids to Israel—and Oscar the Grouch’s Israeli cousin, Moshe Oofnik. Desperate Housewives star Eva Longoria makes a guest appearance for Purim.

And Passover is covered in disc 7 of the new series: In It’s Passover, Grover!, all the horseradish has gone missing, and it’s up to the denizens of Rehov Sumsum to locate some before the Seder. Jake Gyllenhaal guest stars.

Future episodes include Countdown to Shavout, The Sticky Shofar and Monsters in the Sukkah.

“Shalom Sesame” was produced by Sesame Workshop and is being distributed by Sisu Entertainment. —Libby Barnea

Antique Porcelain Auctioned in London
Surviving Nazi looting and the Allied bombing of Dresden, a rare porcelain figure of a male dancer—named L’Indifferent—sold last December for $200,000 at an auction of the celebrated Meissen Ware collection of German Jews Gustav and Charlotte von Klemperer. Included in the auction at Bonham’s in London were 37 other lots of the von Klemperers’ porcelain, including figurines, vase and chandelier fragments, plates and serving pieces.

Gustav von Klemperer was the chairman of the Dresdner Bank before his death in 1926; his collection of Meissen Ware was considered the greatest in the modern collecting era, before Nazis seized it from his descendents in 1938. Assumed destroyed in the 1945 bombing of Dresden, the collection—originally of more than 800 pieces—was ultimately found mostly intact in the rubble.

Several of the auction lots sold well beyond their estimates: A fragment of an important Meissen model of a classical temple of Minerva (estimated at $4,000) went for just over $30,000 and two dancing harlequins—each estimated at $40,000—went for over $115,000 apiece. —L.B.

‘This Is the Temple’
Before a new neighborhood is built in Israel, it’s not the surveyors who come calling first, but the archaeologists. By law they must conduct digs to ensure construction does not go up over potentially important remnants. During a recent routine excavation in the northern town of Beit Shean, archaeologists were delighted to find a hidden treasure: a 1,500-year-old Samaritan synagogue, its intricate mosaic floor still visible with the words “This Is the Temple” in Greek.

“This find is of special importance,” said Walid Atrash, an archaeologist who led the excavation, which also uncovered a large adjacent farmstead. “It provides rich information about the people who lived in this city during the Byzantine period.”

At the time, Jews and Samaritans, then rival groups, lived in uneasy proximity together in Beit Shean alongside Christians. The Samaritans believe themselves to be following the true religion of the ancient Israelites as it was practiced before the Babylonian exile. A small group of several hundred Samaritans still exists today, divided between two communities, one in Holon and the other in the West Bank. —Dina Kraft 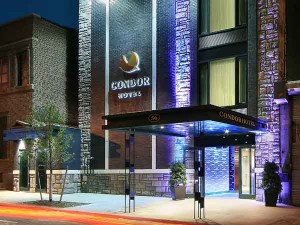 A new boutique hotel in increasingly trendy Williamsburg is focusing on a traditional crowd. The amenities at the 35-room Condor Hotel (www.condornyc.com) are designed with the local ultra-Orthodox community in mind. The concierge speaks Yiddish, and the well-appointed rooms, all with mezuzas, have wig stands and cups for ritual washing. What they do not have, however, are televisions—many Hasidim eschew secular culture. Shabbat guests will appreciate the Sabbath elevator and the candle lighting and havdala services in the lobby. Future plans include a Jewish music and Judaica library.

Part of a growing trend in niche accommodations for the Orthodox that includes the Fabreng Inn in Richmond, Virginia, and the Solomon Suites in Lakewood, New Jersey, the Condor is open to anyone looking for a stylish alternative to pricey New York hotels (rooms start at $159 a night; $199 on Shabbat).

“We did not cut corners,” notes Zalman Glauber, 35, one of the owners. “Every aspect from the carpets to the curtains is high end.” And the community has taken notice; the Condor’s 200-person ballroom is packed with bar mitzvas or sheva brakhot celebrations most weekends. —Leah F. Finkelshteyn

Torah Technology for the Hearing-Impaired
WebYeshiva.org opened its virtual doors in 2007 to enable anyone, anywhere, to participate in an interactive Torah class. The Israel-based Web site offers courses around the clock to accommodate all schedules and time zones, reaching some 6,000 students in 52 countries, to date.

Now, the innovative site is making Torah study even more accessible by offering its first course for hearing-impaired students—in conjunction with the Council of Young Israel Rabbis in Israel and the Jewish Agency for Israel—with simultaneous translation into American Sign Language.

For this newest course—called Jewish Laws of Shabbat: Cooking—students see both the teacher and the simultaneous translator onscreen.

Offering this service “just made sense,” said Rabbi Yedidya Rausman, founding director of WebYeshiva.org. “We have the technology. We have [created] bridges of learning geographically—and now this is the next step.” He hopes the service will spread to most of WebYeshiva.org’s classes in the future. —Rachel Schwartzberg

On Your Mark, Get Set, Go!
If you’re a runner, it is time to start training for the First Jerusalem International Marathon, on March 25. And if you have the time, stay for the Tel Aviv Marathon two weeks later.

In Jerusalem, participants may choose a full marathon, a half marathon or a 10-kilometer (just over six miles) run, all starting at the Knesset and finishing nearby.

Mayor Nir Barkat, who himself has run in five marathons, extends a personal invitation in a video clip on the marathon’s official Web site, www.jerusalem-marathon.com. The run in the capital combines wonderful views with a challenging sports event, he promises.

All the routes go through downtown Jerusalem and along the walls of the Old City, past sites that include Sultan’s Pool, Jaffa Gate, Zion Gate, the Jerusalem Theater, the President’s Residence, the German Colony, the Sherover Promenade with its views of the Old City and—for those running in the city’s first full marathon—Ammunition Hill, Mount Scopus and Augusta Victoria. —Esther Hecht

Despite some of her outdated methods, some of Braun’s nutritional advice is still good: “The only fat that is needed…is natural clean olive oil”; “Fish are tasty, nutritious and easier to digest than meat.”

In the chapter “Caring for a Sick One—Kochen far a Kranken,” Braun suggests pouring beef juice into a red-tinted glass—so the patient will not be able to identify what he is drinking.

There is even an argument for local food: “Often one hears a balebosteh complain, ‘Here in America the chickens have no real taste like they had in the Old Country.’ True, and the reason is clear. They are brought [to the city] often from 100 miles away, are not fed on the trip or are fed unsuitable grains. Then they remain for days crowded together in the cages.”

From appetizers to soups and salads, from fruit desserts to preserves and candies and everything in between, Braun—whose first name and gender remain unknown—knew that the best way into American culture is through the kitchen. —Zelda Shluker