Mahler on the Couch

When Gustav Mahler discovered his wife, Alma, was having an affair, he sought relief in a session with Sigmund Freud. This fanciful reimagination of the four-hour visit between the two great men brims with the genius of its subjects, the vitality of the faithless Alma and, of course, oodles of Mahler’s glorious creations. An interesting footnote: Freud is said to have claimed that he had never met anyone who understood psychoanalysis as well as Mahler did. Directed by Felix O. Adlon and Percy Adlon (www.percyadlon.com). —Judith Gelman Myers

Winston Churchill: Walking With Destiny
What may surprise viewers about Winston Churchill, the eloquent visionary in the fight against Hitler, is how early he understood the danger Hitler represented and that he unequivocally worked to protect the Jewish people. Interviews with survivors of London’s Blitz, Churchill’s descendents and previously unseen footage from the Nazi massacre in 1941 Ukraine are some of the features that make this film another winner for writer Rabbi Marvin Hier and executive producer Richard Trank. Moriah Films (www.moriahfilms.com). —Zelda Shluker 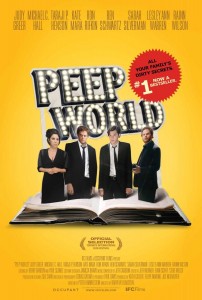 This dysfunctional Jewish family’s emotional life revolves around its rich, self-absorbed patriarch, Henry Meyerowitz (played by Ron Rifkin), and the furor unleashed by the publication of his son Nathan’s tell-all book (Peep World) about his family. His siblings (portrayed by the very funny Sarah Silverman, above, Michael C. Hall and Rainn Wilson) are devastated at the public exposure of their foibles—even as they swear it is all lies. Can this family find happiness? Directed by Barry W. Blaustein for Occupant Films (www.ifcfilms.com). —Susan Adler

Web Sighting
The film section on www.omanoot.comhas a bit of everything: The Lost in Tel-Aviv animated short, for example, depicts a young couple in the city. Then there is Elyokim, about a haredistudent’s love for his rebbe’s daughter and films about the Army experience and punk rockers. The range illustrates the vitality of Israeli life through the diversity of the country’s art—part of the purpose of the recently launched site. Founder Edoe Cohen describes it as an Israeli “HULU, Amazon, iTunes and virtual MOMA, all in one.” The film section is only a start. Future plans include literature and music offerings, even lesson plans. —Leah F. Finkelshteyn

The Sephardic Music Festival in New York has compiled its first album that both conforms to and bends expectations. The diverse selections of 18 songs range from folk and traditional to electro, dance and hip-hop in English, Hebrew, Ladino and Judeo-Arabic. These include “Abba Shimon,” a stirring Yemenite wedding song (Moshav Band); a funky instrumental, “D’ror Yikra” by Jon Madof; an oud-backed rap, “Two Child One Drop” (Matisyahu); and the comic father-daughter dialogue, “Hija Mia” (Sarah Aroeste). Shemspeed (www.shemspeed.com). —Rahel Musleah

DVDs
A Light for Greytowers

Faith is at stake in this dramatic musical set in a Victorian-era orphanage in England. Miriam is given shelter there after she is separated from her parents fleeing the Cossacks. She defies the cruel matron and awakens in the other girls their memories of Judaism. The beautiful, catchy songs in Robin Garbose’s production created for female-only audiences send a message of women’s endurance. Kol Neshama (www.kolneshama.org). —Sara Trappler Spielman

9 Years Later
Danielle’s T-shirt reads “Fun Is My Life,” but this documentary by writers-directors Sari Azouz and Yifat Kedar reveals her frustration and anxiety. Nine years earlier, Danielle had fled to Israel from Morocco, leaving an abusive husband and her 5-year-old son, Nasser. Her efforts at reclaiming the now 14-year-old Nasser are met with roadblocks—including the demand of Israel’s rabbinical court that she prove her Jewishness. Eden Productions (www.edenproductions.co.il). —Renata Polt

Exhibit
The Art of Matrimony: Thirty Splendid Marriage Contracts
These ketubot from the Jewish Theological Seminary’s collection represent decorative Jewish legal marriage documents from Yemen, Iran, India, Syria, the Netherlands, Croatia, Afghanistan, Morocco, Turkey and Ukraine. The earliest is from 12th-century Egypt—a fragment discovered in the Cairo Geniza; the latest is a 1999 multilayered, colored papercut by Jerusalemite Archie Granot. A 1749 ketuba from Venice with a floral border and signs of the Zodiac is typical of Italian design. Winged cherubs frolic on a Greek ketuba (1725), and earth tones and geometric patterns dominate one from 1864 Iraq. Zemah Davidsohn created a design (above) in 1863 New York that has two interlocked circles symbolizing marital union; the time on two clocks is 6:13—the number of biblical commandments. Through June 26 at the Jewish Museum in New York (www.thejewishmuseum.org). —S.A.