By Zelda Shluker May 2011
Email

Graphic Novel
Hereville: How Mirka Got Her Sword

This graphic novel for tweens of all ages—winner of the 2011 Sydney Taylor Book Award and nominated for an Eisner Award—is iconoclastic. After all, who ever heard of “a troll-fighting 11-year-old Orthodox Jewish girl”?

Unusual for her God-fearing family, Mirka is more interested in fighting dragons than in learning to knit. So when her long-nosed, head-kerchiefed stepmother, Fruma, insists she perfect her knitting so that one day she will be a proper married woman, Mirka logically, if cheekily, responds: IfHashem preordains everything, it is not her fault if she drops stitches.

Which is what makes Hereville

Mirka is an imaginative free spirit, but her family (she has nine siblings) thinks she is a weirdo who is ruining its reputation. Mirka has unconventional adventures—reading forbidden books about monsters, battling a fat pig, meeting with a witch and, finally, challenging a troll for a sword. 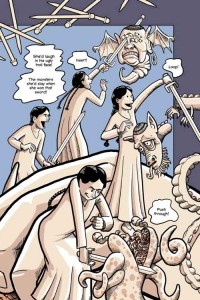 Deutsch’s wonderful, fluid illustrations, which originated as a Web comic, are a real treat. When a fourth girl shows up to Mirka’s party after she has cut the cake in three, Mirka imagines solving the problem by slicing off the new girl’s head. Roping and taming an irritable pig is depicted in horizontal boxes, much like a slide show, with the action moving not just down the page but across forest terrain and below to black watery depths.

offers lessons about bullying and self-protection, finding love, understanding, comfort and meaning in one’s family and traditions. One of the sweetest illustrations is that of Mirka smelling the baking halla, when she imagines herself basking atop the delicious rounded loaf.

Jake Richmond did a fantastic job on the book’s colors. Most of the pages are framed in rich salmon, with figures dressed in black and white or shades of muted brown and tan. The other dominant color is purple, which frames action that takes place at night.

You have got to love a book in which the quest to kill a troll is interrupted for Shabbos.