Operation Let’s Be Friends
Ever wondered what soldiers in the Israel Defense Forces truly think of their service—of tours of duty in Gaza and the West Bank, settlers, the prospects for peace? Now you can ask them. Friendasoldier.com is a new social media Web site that allows you to e-mail soldiers—men and women who have completed their mandatory service—and pose direct questions to them, however sensitive and political they might be.

Founded by IDF combat veterans Josh Mintz, Daniel Nisman and Yagil Beinglass, all in their twenties, Friend-a-Soldier aims to facilitate dialogue between Israel’s soldiers and international communities—especially those in countries hostile to the Jewish state. Mintz has had an ongoing correspondence with Hossam from Egypt, and Nisman has engaged in a back-and-forth with “R” from Syria. Most exchanges are available for all to read on the site.

“We believe that there is no better way to foster peace and progress than by making personal connections through real and transparent dialogue,” says Mintz, who serves as the group’s director of communications.

Since Friend-a-Soldier launched in February, the site has received well over 10,000 hits and more than 500 messages from 100-plus countries. —Libby Barnea

Camp Does Work
The Foundation for Jewish Camp (www.jewishcamp.org) has relased a new survey—Camp Works—on the long-term impact of Jewish overnight camp. In short, camp attendance increases adult participation and identification in every area studied—synagogue membership, holiday observance, Jewish philanthropy and connection to Israel. Specifically, past Jewish campers are:

Patchwork Israel
A turquoise blue Sea of Galilee seems to almost shimmer in a quilt by Cindy Richard, an American ola who translates Israeli landscapes into fabric form. In another quilt, the blooming pink of almond trees lines a quiet, curved path. 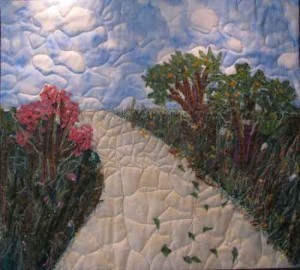 “My passion is for taking photos around the country and converting those scenes to the art. I love when people say, ‘That’s
fabric?’” said Richard (www.cindyrquilts.com), who came to Israel from New York.

Distressed by Israel’s often negative image in the world, she said, “This is my way of showing some of the beauty found here in a very apolitical way.”

Richard is one of some 300 members of the Israel Quilters Organization (www.israeli-quilt.com). In towns and cities, members gather for quilting sessions and there are even two quilting shops in the country. Later this year, their annual exhibit will feature quilts celebrating the theme of kibbutzim in honor of the movement’s centennial. Richard’s contribution is a quilt depicting the view of Mount Gilboa from the fields of Kibbutz Shluhot in the Jordan Valley. —Dina Kraft

Report of Remains May Be Toothless
On the side of a highway in central Israel, archaeologists found eight very old teeth. So old, they say, that it could mean that modern man was born much earlier than we thought. The research team, led by Tel Aviv University experts including Professor Avi Gopher, claims the teeth are 400,000 years old—about twice as old as the earliest Homo sapiens’ remains ever discovered.

The team stresses that more research is needed to verify that conclusion, and some international scientists have already said they are doubtful, arguing that the teeth look more like a Neanderthal’s.

But one leading paleoanthropologist, French scientist Jean-Jacques Hublin, has a different theory: The teeth may belong to a group of human-like creatures we do not know much about yet. Scientists have long argued that Neanderthals emerged in Asia or Europe about 400,000 years ago and later became extinct, while Homo sapiens emerged in Africa and eventually populated the planet. Hublin says the Israeli teeth and other recent discoveries suggest a more complex picture of prehistory.

Discovered: The Happiest Man in America
For the last three years, Gallup has called 1,000 randomly selected American adults each day and asked them about their emotional status, work satisfaction, eating habits, illnesses, stress levels and other indicators of their quality of life.

It’s part of an effort to measure the components of “the good life.” The responses are plugged into a formula, called the Gallup-Healthways Well-Being Index, and then sorted by geographic area and other demographic criteria.

The New York Times asked Gallup to come up with a statistical composite for the happiest person in America, based on the characteristics that most closely correlated with happiness in 2010. Men, for example, tend to be happier than women, older people are happier than middle-aged people, and so on.

Gallup’s answer: He’s a tall, Asian-American, observant Jew who is at least 65 and married, has children, lives in Hawaii, runs his own business and has a household income of more than $120,000 a year. A few phone calls later and…

Meet Alvin Wong. He is a 5-foot-10, 69-year-old, Chinese-American, kosher-observing Jew, who’s married with children and lives in Honolulu. He runs his own health care management business and earns more than $120,000 a year.

Reached by phone at his home (and referred to The Times by a local synagogue), Wong said that he was indeed a very happy person. He said that perhaps he manages to be the happiest man in America because “my life philosophy is, if you can’t laugh at yourself, life is going to be pretty terrible for you.”

He continued: “This is a practical joke, right?” —Catherine Rampell
Text copyright 2011, The New York Times, reprinted with permission.

Trimming Government Fat
One of the most bloated governments in Israel’s history, comprising no fewer than 30 ministers and 7 deputy ministers, has gone on a diet—to reduce the girth of each of its members.

“A few months ago we introduced healthier foods [at government meetings],” said David Baker, a spokesman for the prime minister’s office. “We cut out fattier foods and unhealthy foods.”

Gone are the rugelach and the bourekas (cheese-filled pastries) that were ubiquitous in the Knesset. In their stead are granola, fruit, raw vegetables, hard-boiled eggs and low-fat yogurt. Most ministers do partake of the cafeteria’s $9 lunch.

Some government members and MKs make up for lost calories in the privacy of their offices, according to a recent report in the Ha’aretz newspaper. Finance Minister Yuval Steinitz goes in for Kurdish kubbeh (dumplings) and Kadima chair Tzipi Livni snacks on chocolate bars and Doritos. Livni’s party colleague Dalia Itzik prefers cakes from gourmet Tel Aviv patisseries.

Under Avigdor Lieberman, the Foreign Ministry limits soda and even coffee at meetings, serving only tap water, fruit and pretzels; foreign guests do receive cookies, though Lieberman himself is said to rarely touch cakes and cookies, mainly eating fruits and vegetables. —Esther Hecht