Campus Battle
Regarding “Defending Israel on Campus” in the April/May issue: I take issue with the use of the term “pro-Palestinian” for those promoting boycott, divestment and sanctions. Were they pro-Palestinian, they would be trying to get the Palestinian and other Arab leadership to make, rather than keep rejecting, peace with Israel. The struggle on campus—and elsewhere—will always be an uphill battle for the friends of Israel for a simple reason: Israel’s enemies are motivated by a more powerful emotion than its supporters—hatred.
Alan Stein, President, PRIMER-Connecticut
Promoting Responsibility in Middle East Reporting
Via e-mail 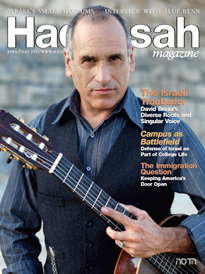 Palestinian propaganda on college campuses is a problem that has been growing for 20 years and was dismissed when we should have been increasing contributions to campus Hillels. Even now, our response is tepid. The response to a Palestinian protester at a mock checkpoint should be “Better a checkpoint than a suicide bomber.” Students should carry the names of every person who was blown up in Israel by a suicide bomber before the wall went up and should carry pictures of the wall on their T-shirts with the names of those who were murdered.
Roberta Kalechofsky, Ph.D.
Marblehead, MA
Via e-mail

Strikingly absent from this article is a discussion of the moral dilemma posed by the occupation. When discussing Israel we are asking young Jews to leave their values of social justice at the door. This is unfortunate because now more than ever there exists the possibility of implementing a two-state solution…. It may feel comfortable hiding behind a sign that says “We are ready to talk are you?” but the reality is that, to many military experts, the Palestine Liberation Organization has obtained a degree of professionalism that mitigates against renegade behavior. Lately even Hamas, having been bloodied, wants a truce.

Campus Jews calling for an end to the occupation are no less pro-Israel than their counterparts
because they are the ones willing to see contradictions that must be addressed. The peace camp seems to be more willing to wrestle with the angels on this one. In fact, it is they who may be riding the tide of history.
Abbott Gorin
Millburn, NJ
Via e-mail

For Legal Immigration
I’m about to be inducted as a Hadassah chapter copresident. Imagine my surprise, then, when I read about how I was “anti-immigration,” as Republicans are generally thought to be (“Lifting the Lamp Again,” April/May issue).

Republicans are not “anti-immigration.” We are interested in legal immigration, border security, appropriate distribution of limited resources and prioritizing those who have followed the rules and waited their turn. We are not opposed to reform, but we don’t believe that undocumented immigrants who do not pay taxes are entitled to state benefits. There is simply no way to provide costly services and benefits unless taxpayers pay more.

Republicans are also not opposed to supporting individual communities and cultures or people
communicating in their native languages, yet many of us think you should learn to speak English if you want to come to this country. As a physician, I can tell you it is unspeakably dangerous for people not to speak the language. Yes, I can get a translator on the phone—but those five minutes might be the difference between life and death. There is also a financial cost borne entirely by the service providers. To a small physician practice, this cost may be the difference between paying to treat a patient and being paid to treat a patient.
Kimberly Greene-Liebowitz, M.D., M.P.H.
Westchester County, NY
Via e-mail