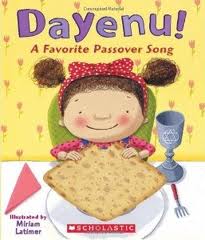 This board book is a cheery one—you can tell that right away by the cute little pigtailed, polka-dot-clothed munchkin on the cover. The familiar refrain throughout is “Dayenu!” and every page expresses joy, both in lyrics and illustrations. There is Moses holding his staff and Miriam with timbrel in hand as they leave behind the pyramids of Egypt to venture into the desert. The text says: “When the Jews came out of Egypt, That was enough to make us happy, Sing a Song and show we’re happy, Dayenu!” We can sing to that. 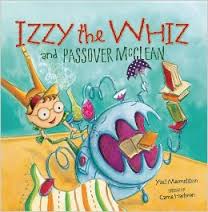 Izzy the Whiz and Passover McClean

Izzy the Whiz has invented a gadget that every mom preparing for Passover would love to have: a wacky vacuum-washer thingamajig that will swallow everything in a room, spin it clean, remove the hametz and spit it out. But what if the Super-McDuper Passover McClean machine goes on the fritz and everything comes out upside down? Futuristic and whimsical illustrations make this a blast. 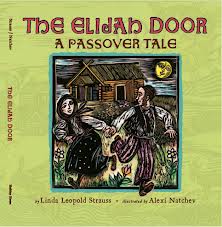 The Elijah Door: A Passover Tale

Two families living side by side in a small village “that was sometimes Poland and sometimes Russia” always celebrated holidays together, and everyone knew that one day little Rachel Galinsky and David Lippa would marry—until the Galinskys swapped two fat geese for six of the Lippas’ laying hens and the geese died and the families stopped speaking to each other. But Passover is coming and Rachel and David go to the village rabbi for help. Will his plan heal the rift?

Artwork by Alexi Natchev—folksy images carved into wood and linoleum plates, and hand-colored with watercolor—makes this charming book stand out. The images are inspired by traditional East European folk prints from the 18th and 19th centuries. 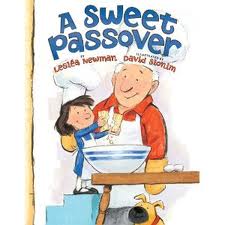 Little Miriam loves matza. So every day that she celebrates Passover at Grandma and Grandpa’s house, she eats matza—with butter, jelly, tuna, egg salad, cream cheese and cottage cheese—until she is sick of it. On the last day of the holiday, Grandpa says he is going to make Passover French toast. When Miriam learns he is making it from matza, she says she will never eat matza again. The delicious recipe included in the book demonstrates how her Grandpa got Miriam to change her mind. Cheery pictures and a warm sense of family add to the fun and meaning of the story. 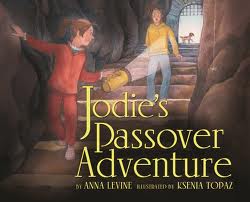 Jodie lives in Israel and wants to become an archaeologist just like her father. When her American cousin Zach visits during Passover, her father brings them to Hezekiah’s Tunnel in Jerusalem. Before they go in the tunnel, her father challenges them to figure out the “riddle of the middle.” Jodie’s flashlight lights the way as the two descend underground into the long, narrow and low-ceilinged tunnel that once provided an escape route for King Hezekiah. Jodie and Zach’s keen sense of observation helps them unravel the riddle—and enjoy a holiday picnic of jelly and butter matza sandwiches.