By Barbara Trainin Blank May 2012
Email

Once there was a play—and a theater was created to present it. That’s part of the story behind the establishment of New Yiddish Rep five years ago.

David Mandelbaum, New Yiddish Rep’s founding artistic director, was looking for a venue for Yosl Rakover Speaks to God, a play he had adapted from a book of the same name by Zvi Kolitz. “I didn’t succeed, so I did it on my own,” he says.

Asked to contribute to an Argentinian Yiddish daily, Kolitz hastily wrote the story of a Gerrer Hasid who is the lone survivor in a section of the Warsaw Ghetto during the uprising. “The story found its way to Israel with no attribution, and it was assumed it was a real last will and testament,” Mandelbaum says. “The Hasid says to God that no matter what God does, he will believe in God in spite of God.”

That kind of faith might apply to his belief that there is enough room and interest for another Yiddish theater in New York City; Mandelbaum himself is a veteran actor of Folksbiene (see story). “It’s good to widen the horizon,” he says.

His 50-minute dramatic version of Yosl Rakover was staged by New Yiddish Repertory in 2007 and given a repeat performance last April for Holocaust Memorial Day.

In May, New Yiddish Rep presented “Meshiakh in Amerike,” a play by Moshe Nadir adapted by Rafael Goldwasser, and a new three-act comedy, “Agentn,” based on the works of Sholem Aleichem. These and other productions are taking place at the Hebrew Actors’ Union in New York’s East Village—which Mandelbaum calls “an important step toward rehabilitating that venerable landmark as a center of Yiddish theater history and performance.” 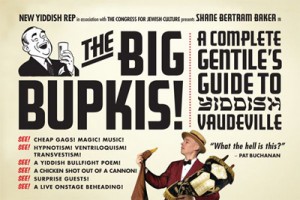 He describes NYR as a black-box, intimate type of theater with a focus on the “serious side of theater.” But not humorless; one of its productions is Big Bupkis: A Complete Gentile’s Guide to Yiddish Vaudeville, staged by veteran Yiddish actor Shane Baker (who is not Jewish).
Blending humor and drama is Waiting for Godot, which will have its world premiere in Yiddish in Fall 2012; the theater has signed an option for a new translation and the exclusive right to produce this absurdist masterpiece. In Spring 2013, an interactive adaptation of S. Anski’s Yiddish classic, The Dybbuk, follows.

One of New Yiddish Rep’s goals is to find a permanent home; so far the company has been itinerant—having performed at the Actors Temple; Workmen’s Circle; the Sixth Street Community Synagogue; the Jewish Community Center of the West Side; and, more recently, at Temple Beth Emeth in Brooklyn.

New Yiddish Rep is open to shows in Yiddish or English, or what is known as “Yinglish.” “There is a need to present compelling theater, whatever the language. We want to shy away from nostalgia,” Mandelbaum says.

He believes the most accessible place to keep Yiddish alive is on the stage, “where people have an opportunity to hear the language and see it as a living language. We can’t keep a language alive as a culture through musical revues.”

But music will be a part of New Yiddish Repertory. April saw a concert by Anthony (Mordechai Tzvi) Russell, an African-American classical singer of opera and lieder performing Yiddish art songs. In May, Toronto actor, singer and producer Mitch Smolkin performed a blend of the Yiddish and the American Songbook in his show “Rexite the Wunderkind,” based on his new album.

One dream is for New Yiddish Rep to become a permanent Yiddish repertory theater based in New York but composed of international groups of actors, directors, designers and other theater professionals performing in Yiddish, Hebrew, English—even Russian. “There are wonderful Jewish playwrights out there, and I’d like to see Yiddish and Jewish theater done at least 26 weeks out of the year, so people can get exposed to a wide range of plays and classics,” says Mandelbaum. “We want to keep the theater small and cutting edge, to make the work as interesting and compelling.”

While there has been some buzz about the “competition” between New Yiddish Rep and the venerable Folksbiene, Mandelbaum insists that “the more Yiddish theater, the better.”