Inside Hadassah: Stamp of Approval

Throughout 100 years of service, Hadassah women have remained steadfast in their commitment to building Israel and in their dedication to the healing of its people—whether sending nurses to Palestine, founding hospitals and medical infrastructure or raising the necessary funds to make all of this healing happen.

And now, a one-of-a-kind exhibit in New York on Jews in medicine is showcasing Hadassah’s pioneering contribution to health care in prestate Israel, noting that Henrietta Szold passionately believed that Jewish American women were uniquely qualified to export “the results of the American healing art.”

Our great work in Israel—in health care and beyond—has not gone unnoticed. In honor of our Centennial, the Israel Postal Company is unveiling a new Hadassah stamp in September. a So much to be proud of, and so much to be inspired by, as we continue building Israel and healing the sick.

Calling All Cookbooks!
Does your chapter or group have an outstanding cookbook that was produced in the last few years that you would like to share with Hadassah members across the country? If so, we want to know about them! We are interested in gathering the latest chapter and group cookbooks for a roundup review in one of our increasingly popular online magazine issues.

If you would like to see your cookbook mentioned, please send one copy to: Libby Barnea, Hadassah Magazine, 50 W. 58th, New York, NY 10019. We plan to collect the cookbooks over the next several months and aim to review them and list some of the best recipes early in 2013.

Then the brainstorming process began. Representatives from Hadassah’s Office in Israel met with the postal company to relate Hadassah’s history and current projects. Photos and material about our works were provided. The stamp experts made it clear that a single image—i.e., a Hadassah emblem, sketch of the Sarah Wetsman Davidson Hospital Tower or photo of Henrietta Szold—would not be considered. They were seeking a modern design worthy of international recognition. Hadassah members were invited to submit ideas, and these were solicited in Israel and on the Hadassah Web site.

The winning design features white symbols of Hadassah’s work forming a Magen David on a blue background. The Hadassah emblem appears in the right-hand corner. The Hebrew words Nashot Hadassah, Hadassah Women, are in red. Below the stamp itself is a black-and-white photo of the 1918 American Zionist Medical Unit that Hadassah dispatched. The stamp will be 1.6 inches wide and 2.4 inches high with a value of approximately $1.75. For ordering information, go to www.israelpost.co.il.

The stamp was designed by artist Zvika Roitman, who has created several previous Israeli stamps including ones honoring Yitzhak Rabin, Pope John Paul II’s visit to Israel and the legacy of David Ben-Gurion.

“Hadassah works in so many important areas: education, medicine and Zionism,” said Roitman. “The challenge was putting this together in a stamp that was going to be small.” 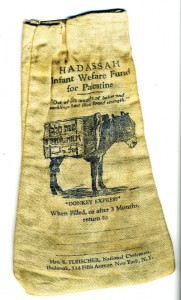 Hadassah on Display
On view now through August at Yeshiva University Museum in New York is a first-of-its kind exhibit on the role of Jews in modern medicine, from pioneering doctors and Jewish hospitals to our fabulous and effective nurses. The exhibit is titled “Trail of the Magic Bullet: The Jewish Encounter with Modern Medicine, 1860-1960,” in honor of Dr. Paul Ehrlich, the father of chemotherapy.

Of particular pride in our Centennial year is a section devoted to Hadassah and its founder, Henrietta Szold, paying special attention to our first medical mission in 1918, when we sent two nurses to Palestine to “reestablish or revitalize hospitals throughout the area.”

The museum (www.yumuseum.org) illustrates the Hadassah section with coin pouches used to collect money for Tipat Halav (A Drop of Milk), a program launched in 1921 that promoted breastfeeding and also distributed pasteurized milk. Also on view is a black-and-white photograph of The Donkey Express that was used to deliver milk outside the city walls of Jerusalem.

Art@Hadassah
Hadassah is more than just a leading medical, academic and research center, and more than the defining movement for American Jewish women of the last 100 years. Hadassah is also the proud home of priceless world-class art. Beyond the well-known 12 Chagall windows—located at the Abell Synagogue at Hadassah Medical Center at Ein Kerem, in Jerusalem—Hadassah owns stunning paintings, sculptures, mixed-media creations and other works of art from celebrated artists such as Alexander Calder, Yaacov Agam and Jacques Lipschitz.

Now you can take an online tour of Hadassah’s incredible art collection, both in Israel and America: Go to www.hadassah.org/centennial and click on Art@Hadassah to view a video tour of the most notable works of art.

Globetrotting with a Mission
Our Centennial celebrations turn to the whimsical and downright fun with Traveling Henrietta, a project à la Flat Stanley that has Hadassah members and Henrietta Szold enthusiasts snapping photos of our beloved founder across the globe and in their own backyards. Traveling Henrietta is a soulful likeness of Szold, wearing a dark dress and matching shoes and handbag.

You can go online, print out a one-page PDF photograph of Henrietta Szold (feel free to enlarge it)—and then start snapping away!

Traveling Henrietta has already been spotted visiting Yellowstone National Park, biking in Colorado, cruising in Latvia and perched on the Great Wall of China. And her travels have just begun! E-mail your Traveling Henrietta photos to travelinghenrietta@hadassah.org. And to get started, go to www.hadassah.org/centennial and click on the Traveling Henrietta story to learn how to print your own Henrietta, and to view a fabulous map and gallery of Henrietta’s travels so far. Take part and enjoy the fun!

London Calling
Hadassah Magazine’s annual Harold U. Ribalow Prize is normally presented at a ceremony in New York, but the 2011 prize traveled across the pond to be presented in another important literary venue: London. The March 26 reception was held at the Groucho Club in Soho, where the award was given to British writer Howard Jacobson for his novel The Finkler Question

, Jacobson’s 11th novel, is set in modern-day England. It focuses on the relationship between Sam Finkler, a recently widowed Jewish writer of popular psychology and television personality, and his gentile friend Julian Treslove, a washed-up former radio producer. Treslove is attacked on the street late one night and attributes the crime to anti-Semitism; the experience changes his perspective and his sense of self.

At the event, Jacobson expressed his surprise at receiving the Ribalow prize, which is presented annually to an outstanding work of fiction with a Jewish theme. “When I was last in America I had to work hard to convince Americans that there were any English Jews at all, let alone English Jewish writers,” he noted. “And here [in England], we are so in thrall to American Jewish writing—with good reason, God knows—that we don’t believe there are any English Jewish writers either.

“Three hundred and fifty years of lying low, minding our own business, staying shtum and playing at being philistine—going from the people of the book to the people of the no book, explains this partly,” he said of British Jewry. “We have spent so long not wanting to be noticed, that we are reluctant now to notice ourselves.”

Jacobson, 69, was born in Manchester, England, and grew up in a culturally Jewish, secular environment. He studied English literature at the University of Cambridge and has held several teaching positions in England as well as a brief stint at the University of Sydney, Australia. The one-time broadcast journalist married his wife, television producer Jenny De Yong, in 2005 and has one son from a previous marriage and one granddaughter.

“I used to get fed up being called the English Philip Roth, so I called myself the Jewish Jane Austen to change the music,” Jacobson said with his characteristic humor. “But also because I wanted to be read in America—after all, I read and loved the Americans—and I could see why they would think that if I was the English Philip Roth then there was no reason to bother reading me, since they already had their own.”

At the reception, well-known British biographer, lecturer and journalist Anne Sebba gave the keynote address. Her most recent book is That Woman: The Life of Wallis Simpson, Duchess of Windsor

(Weidenfeld & Nicolson). She spoke about how different Britain would be today if Wallis Simpson had not met Edward VIII, positing that perhaps European Jews would not be here at all. Sebba also conducted a lively conversation with Jacobson about his novel and his writing process, followed by a question-and-answer session with the audience.

The event was attended by 60 people, including trustees of Hadassah UK, members of Young Hadassah International, donors and journalists. Carolyn Simons, chair of Hadassah UK, gave introductory remarks before the prize was presented to Jacobson by Hadassah Magazine’s executive editor, Alan M. Tigay. Guests at the reception enjoyed canapés and drinks.