Looking Toward Our Second Century

In this issue of Hadassah Magazine, we commemorate just some of what we have accomplished over the last 100 years—and all that we are still doing to build the State of Israel, enrich our lives as American Zionist women and spread the message of Hadassah around the globe.

Here, we share with you the latest Centennial news, including a recent day of celebration in our nation’s capital. Also, enjoy a fascinating portrait of our beloved founder, Henrietta Szold: an analysis of her handwriting from an expert graphologist.

Celebrating a semicentennial this year are the Chagall stained-glass windows in the Abbell Synagogue at Hadassah Hospital at Ein Kerem. Hadassah has entered a partnership with Christie’s auction house to offer donors the opportunity to sponsor one of these magnificent 12 windows.

May the beauty of these windows continue to inspire us as we recommit ourselves to Hadassah’s mission of practical Zionism, and as we get to work on our second century of accomplishments. 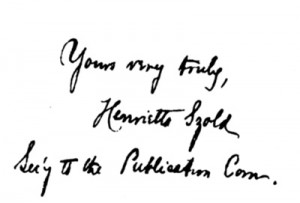 Szold’s handwriting style is fairly plain and unadorned. “Her signature is the same size as the rest of her script,” Poizner explains. “Missing is the self-importance otherwise implied when the signature is either larger then the writer’s script or more ornate.”

Also worth noting is a pronounced upper zone (letters like ‘l’ and ‘d’ reach well above the middle zone of the writing), a carefully articulated middle zone and depth and definition in the lower zone (the long extension on the letter ‘z’). The upper zone indicates intellectual interest; the middle zone the degree to which one is alive to interpersonal connection; and the lower zone signifies the degree to which an individual is practical and dynamic. Most writers favor one zone or another, showing facility in one sphere of life over another. But Szold, Poizner points out, was well developed in the three central spheres that govern human function: thinking, feeling and doing.

An additional note: Szold uses two different forms of the letter ‘e.’ She uses both the Greek ‘e’ and the more familiar letterform, for instance in her first name. Poizner observes that graphologists typically view the Greek ‘e’ as evidence of cultural interests. When a writer alternates letterform, it is considered proof of a versatile personality.

Windows to Our Past—and Future

A new partnership is bringing together two well-known international institutions: Hadassah and Christie’s fine art auction house in London. They are joining forces—together with the family of renowned artist Marc Chagall—in a new initiative in honor of Hadassah’s Centennial and the 50th anniversary of the installation of the famed Chagall windows in the Abbell Synagogue, at Hadassah Hospital at Ein Kerem.

The Chagall Project celebrates the artist’s generous gift—which has become a symbol of Jerusalem—by offering sponsorship of the stained-glass windows. For a reserve of $1 million per window, donors can forever link their names to these stunning works of art. Donors will be recognized on a special wall in the synagogue.

“Hadassah has a great belief in the healing power of art,” explains Nathalie Dwek, who is active in Hadassah UK and conceived of the idea for the Chagall Project. “Art raises people’s spirits, engages, distracts, provokes deep thoughts and is a wonderful escape from the relentless life and fears that one experiences in a hospital. This also is true for staff and family members as well.”

The partnership, she notes, is therefore one of mutual esteem. “Christie’s is a long-established and respected company,” she says. “They have a strong reputation for philanthropy. They share many of the Hadassah values, particularly those of coexistence and [building] a bridge for peace.”

Chagall spent over two years designing and creating the 12 stained-glass windows, representing the 12 tribes of Israel. Each window is 11 feet tall and 8 feet wide, larger than anything else the artist had previously created. At the dedication ceremony at Hadassah Hospital in February 1962, Chagall spoke in Yiddish about the ecclesiastical medium. “For me a stained-glass window is a transparent partition between my heart and the heart of the world,” he said. “Stained glass has to be serious and passionate. It is something elevating and exhilarating. It has to live through the perception of light. To read the Bible is to perceive a certain light, and the window has to make this obvious through its simplicity and grace….

“I am hoping that you will like them and that they will overflow with the harmony I dreamt of,” he added.

Indeed, their vibrant colors convey the characteristics of each of Jacob’s sons as well as the biblical blessings bestowed upon the tribes. Together, as Chagall invoked, they represent the unified people of Israel.

The Chagall window sponsorship—supported by Lionel Pissarro, great-grandson of celebrated Impressionist Camille Pissarro—is a chance for art patrons to associate their names with a 20th-century masterpiece and, through their donation, leave a lasting legacy of healing in Jerusalem.

The Chagall Project also gives Hadassah supporters the opportunity to emulate Chagall’s munificent gift of fine art; donated works of art, sculpture and jewelry will be sold by Christie’s at its international auctions, at beneficial terms.

The initiative was launched in February at Christie’s auction house in London. At a gala cocktail reception, guests enjoyed a private viewing of Impressionist and Modern art being sold by Christie’s and were treated to personal stories of Chagall told by his granddaughter Meret Meyer-Graber.

“We are making great links and revitalizing friendships and connections in the Hadassah family,” explains Dwek. “My personal hopes are that we continue to develop this global model and always keep one international project in our…basket.”

Both components of the Chagall Project will run through December, though donated pieces will already be included in Christie’s autumn auction lots. The proceeds will help with the final stages of construction of the Sarah Wetsman Davidson Hospital Tower (see story), the 19-story building that opened on the Hadassah campus at Ein Kerem this year.

The IT Girl
Ifat Baron has been making an impact on the world of IT education in Israel for years, and now her work to expand the high-tech boom in Israel to underrepresented groups—including women—has resulted in her being awarded the 2012 Bernice S. Tannenbaum Award. The annual award, handed out by the Hadassah Foundation, honors former Hadassah National President Bernice S. Tannenbaum’s lifetime of service to the Jewish people, Israel and Hadassah.

Baron, the founder of IT Works, relied on her experience as a program manager for Cisco System’s corporate social responsibility division when she started the nonprofit. Baron has done a praiseworthy job of “leveling the playing field in Israel’s high-tech marketplace, particularly for women,” noted Donna Gerson, chair of the Hadassah Foundation, when discussing Baron’s selection as this year’s winner.

“The influence of this prestigious prize,” commented Baron, “highlights not only the economic gains women have made to date, but brings into focus the tremendous work that still needs to be done to advance the lives of women and girls in Israel and around the world.”

Hadassah Goes to Washington
In honor of our Centennial, Hadassah has been receiving birthday wishes from several state and national politicians all year. And, in May, 100 lucky members and Associates joined Hadassah National President Marcie Natan in our nation’s capital for a celebration that included a luncheon with keynote speaker Michael B. Oren, Israeli ambassador to the United States; a White House briefing at the Old Executive Office Building; and a Capitol Hill reception in the evening with members of Congress, from House Majority Leader Eric Cantor to California Senator Barbara Boxer.

At the luncheon, Oren spoke of his personal experiences at Hadassah Medical Center in Jerusalem—and the equality he has long witnessed there—particularly a visit when an Arab doctor treated his wife as well as stories of Jewish doctors healing scores of Arab patients.

At the White House briefing, members and Associates heard from White House Senior Adviser Valerie Jarrett about “enhacing American life through Jewish values.” Jarrett also commented that President Obama is committed to a strong Israel even as he pursues peace.

After Jarrett, Second Lady Jill Biden spoke to the crowd, congratulating the assembled Hadassah leaders on reaching this Centennial milestone before discussing the American military’s Female Engagement Team, which involves female soldiers providing aid to Afghani women. Biden then entered the audience to meet all 100 members and Associates.

The eventful day wrapped up with the Capitol Hill reception, where Hadassah had earlier been honored with Senate and House resolutions lauding the organization’s Centennial.

1912 Was Also a Big Year For….
Ever wonder what else was happening the year that Henrietta Szold founded Hadassah? Here is a sample of businesses, other charitable organizations and notable people reaching centennial milestones and would-be 100th birthdays: