Letters to the Editor: Hadassah and Empowermen 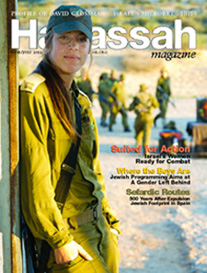 Our Nursing Roots
I am a lifelong member of Hadassah, a member of a Hadassah nursing council as well as a graduate of the nursing school. In the June/July President’s Column, “It’s All in the Family,” it is written that “Our doctors are among the best in the world” and “the patients spoke most appreciatively about our incredible doctors.” There was no mention of the nurses who work so hard to fulfill the needs of the patients at the hospital.
As we celebrate 100 years of Hadassah, and in the memory of the two nurses who were sent to Jerusalem almost a century ago, it would have been nice to read about the dedicated Hadassah nurses who continue the mission of Henrietta Szold, may her memory be for a blessing.
Ilana Miller
Parkland, FL
Via e-mail

The Value of Aliya
Why would Hadassah Magazine print an article that discourages aliya to Israel (“Letter from Jerusalem: Triage for Founding Values,” June/ July issue)? Certainly with Israel now one of the top technological nations and no longer mainly agricultural, population density becomes of secondary importance.
Nelson Marans
Silver Spring, MD
Via e-mail

Corrections: In the book essay on Anne Frank in the June/July issue, we mistakenly wrote that Frederick Douglass authored Up From Slavery (1901); that book was written by Booker T. Washington. The title we meant to refer to is Narrative of the Life of Frederick Douglass, An American Slave (1845).
In “The Arts: More Alive Than Ever” (June/July issue), we incorrectly wrote that “The Qumran community began to take shape between 166 and 63 C.E….“ The dates should have read “between 166 B.C.E. and 63 C.E.”