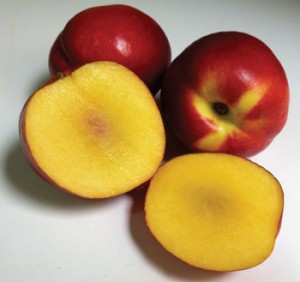 “The idea is to have special products with special flavors,” said Ben Dor, owner and breeder of Ben Dor Fruits and Nurseries in Yesud Hama’ala in northern Israel. The revital—which means “to quench thirst”—makes the mango flavor portable: There’s no need to cut around a huge seed.

Revital is now sold as a gourmet line in Israeli markets and is exported to England and South Africa. Ben Dor has bred many new varieties of stone fruit, and gives growers in other countries the rights to produce them. He exports 3,000 tons of stone fruit every year, including new breeds such as red-flesh apricots, flat pita peaches and red-skinned Odem Galina apples.

His first priority is flavor, he says. “When you eat fruit, you want to enjoy it.” —Randi Sherman

Shelter from Harm
A Jewish long-term care facility in Ohio became the Midwest’s first to offer shelter for victims of elder abuse. Since January, the Cedar Village Retirement Community’s Shalom Center for Elder Abuse Prevention has provided short-term crisis management services—90 to 120 days—for people 65 and older in five counties around Cincinnati and Dayton.

“If someone is in critical need, we have a bed and services that are always available,” says Carol Silver Elliott, Cedar Village chief executive officer and president. “They include medical, nursing, therapy, social work, pastoral care and nutritional support.”

The Jewish Foundation of Cincinnati provided a $100,000 startup grant for Cedar Village to run the Shalom Center. — Ronda Robinson

Venezuelan Friend to the Jews
The October presidential elections in Venezuela have more than a passing interest for the Jewish community. Henrique Capriles

Radonski, the politician and lawyer who challenged 13-year incumbent Hugo Chavez, is a practicing Catholic, but he has Jewish ancestry on both sides of his family.

The grandson of Holocaust survivors who escaped to Venezuela “with nothing but a suitcase full of clothes,” Capriles, 39, talks emotionally about his great-grandparents, who were murdered in Treblinka. His father, a Catholic, was a descendent of Sefardic Jews from Curaçao. After his landslide victory in the February primary (he received 61 percent of the vote), anti-Semitic rhetoric—allegedly by state-run media sources—lambasted Capriles as a “Zionist agent,” questioned his sexual orientation and cast doubt on the legitimacy of the vote. His response has been restrained: “The only confrontation I want is against violence, unemployment, corruption and other problems in Venezuela.”

Over the years, Capriles, governor of Miranda state, has been the target of political harassment by Chavez, and, in 2004, was charged with fomenting violence and put in prison (the charges were later dropped). Even though he became a devout Christian in prison, he has maintained close ties to the Venezuelan Jewish community, which has struggled under Chavez over the past 10 years and has shrunk in half to a population of less than 10,000 today. —Rahel Musleah

A Jewish Ritual for Brides
How can a bridal shower be infused with Jewish values?

The Baltimore Chavurah—a multigenerational group of families who share Shabbat and holidays, Jewish learning and life cycle events—created Isha l’Isha (Woman to Woman), a ceremony to convey the passing on of Jewish traditions and wisdom from mothers to daughters and daughters-in-law.

The Chavurah invites all women members, along with the bride’s mother and sisters, to decorate a fabric square with a theme related to Judaism, marriage or of special interest to the bride. The artistic creations are presented to the bride-to-be at the Isha l’Isha ceremony and later quilted together to form a beautiful halla cover, a communal gift for the couple to use at their wedding and in their new home.

“The goal of the Chavurah women was to create something new and different from the traditional bridal shower,” Chavurah member Israela Meyerstein said. The Chavurah women also make a contribution to a charity of the bride’s choice.

Now in its seventh year, Isha l’Isha includes an original song, luncheon, cookbook, game and blessings for the bride-to-be. 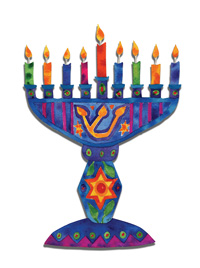 People of the Puzzle
Jigsaw puzzles have come a long way since they were first commercialized by London mapmaker and engraver John Spilsbury in 1760, when he mounted his own map on a hardwood sheet and cut around the borders of the countries using a saw. The puzzles were used to teach British children geography. Today, most people put together cardboard puzzles of 100 to 32,000 pieces for fun.

Israelis love jigsaw puzzles: They buy 1.2 million annually. Americans—with a much larger population—purchase some 3 million puzzles per year. “They are a good Shabbat and holiday activity—you have the actual time to do them,” says Faye Bittker, who lives outside Beersheeba. A self-described jigaw enthusiast who likes to put puzzles together with her family, Bittker says. “Even if you are not religious, until recently, there wasn’t all that much else to do on these long holidays.”

Jewish puzzle themes include everything from Hanukka menoras to Passover blessings and pictures of Jerusalem. Custom puzzle company Stave even designs one-of-a-kind, old-school puzzles: for example, a hand-carved, cherrywood-backed, five-layered wood in shape of your own design (uncut puzzle above). They challenge families to finish this one in eight days. —Amy Klein

Israeli Unesco Site
A group of four caves on the western slope of Mount Carmel, near Haifa, in which humans evolved over a period of 500,000 years, are now part of a Unesco World Heritage Site. Nahal Me’arot Nature Reserve is unique because Neanderthals and early anatomically modern humans existed side by side there as part of the same culture. It “provides a definitive chronological framework at a key period of human development,” according to Unesco.

This is the seventh World Heritage Site in Israel. Others include Masada, the Old City of Akko and the White City of Tel Aviv. The caves contain evidence of burials, early stone architecture and the transition from a hunter-gatherer lifestyle to agriculture and animal husbandry. Remains of stone houses and pits are evidence of a hamlet that first existed about 15,000 years ago.

After 90 years of excavation, much is yet to be found. Unesco says the site’s cultural sequence of unparalleled duration provides “an archive of early human life in southwest Asia.” —Esther Hecht