Inside Hadassah: Stamp of Approval

It’s a year of milestones for The Women’s Zionist Organization of America. Amid the Centennial celebrations, one group within Hadassah celebrates a more modest, but still significant, milestone: Hadassah Australia turns 10. In that relatively short time, the group from down under has much to show for its efforts.

Hadassah Associates are also celebrating an impressive achievement of reaching their goal of raising $2 million for stem cell research at Hadassah Medical Organization. The final amount was raised in memory of Howard Kaplan, whose wife, Marlene, is national vice president.

Our big accomplishments are a source of pride that continues to motivate us to work harder for our timeless cause. —Nancy Falchuk

Meet the Veep: Marlene Kaplan
Marlene and Howard Kaplan were 16 when they met at a B’nai B’rith Youth Organization charity event. Five years later they married.

As a shy young mother, Marlene hesitated when asked by her husband’s cousin Sunny Rubin to join North Boundary Hadassah in Chicago. It wasn’t the shyness that caused her to hesitate—it was the $10 membership fee. She and Howard were not sure they could afford the dues. Eventually, Marlene persuaded a friend to go to a meeting with her. By the second meeting in the 1980s, she became HMO chair, a job that lasted 14 years. This initial local connection was the spark that ignited a lifelong commitment to Israel for both Marlene and Howard. Israel became a passion and a priority for them and their four children.

Marlene first became president of her group, then of the Chicago Chapter. She moved on to greater leadership as a national board member; currently she serves as national vice president.

Kaplan learned about being Jewish from two sources: her children, when they started Hebrew school, and from Hadassah. Her friends there became her closest friends and she describes Hadassah as a very special sisterhood.

Howard Kaplan became president of the national committee of Hadassah Associates about the same time that his wife became vice president. Under his leadership, fundraising for stem cell research at Hadassah became a priority for the Associates.

Sadly, Howard Kaplan passed away in June 2011. In his memory, the Hadassah Associates raised over $100,000—the final funds to reach their goal of $2 million for stem cell research at the Hadassah Medical Center, an initiative that sprang from his dream.

After 50 trips to Israel, 17 led by the Kaplans, Marlene looks back on the impact of their dedication to Israel on their family. Today, their children—Rhonda, Bennett, Audra and Patrick—are all involved in Jewish philanthropy, including Hadassah. When their four grandchildren became b’nei mitzva, they donated their monetary gifts to Hadassah. 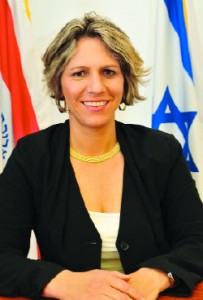 Welcome Home
Dr. Osnat Levtzion-Korach has been appointed director of the Hadassah–University Hospital on Mount Scopus, succeeding Dr. Zvi Stern, who recently became president of the Jerusalem Academic College of Engineering. Dr. Levtzion-Korach is a graduate of the Hebrew University–Hadassah School of Medicine and completed residencies in both pediatrics and hospital management at the Hadassah–Hebrew University Medical Center at Ein Kerem.

After receiving a master’s degree in health administration from Tel Aviv University, she worked at the Center of Excellence for Patient Safety Clinical Research and Practice at Brigham and Women’s Hospital and Harvard Medical School in Boston. She also served as a senior consultant at Boston University’s Program of Management and Variability in Healthcare Delivery and later at PatientFlow Technology, a leader in health care performance improvement.

Upon her return to Israel, Dr. Levtzion-Korach was named deputy director of Assaf Harofeh Medical Center. She has authored or coauthored a dozen research studies that have been published in prestigious medical journals and continues to pursue her research interests.

“I am proud to return to Hadassah and join the management team of the leading medical institution in Israel and the region,” said Dr. Levtzion-Korach. “I intend to focus on implementing the latest advances in patient safety practices, patient-centered care, risk management and quality assurance.”

Born in Jerusalem, Dr. Levtzion-Korach is married to Dr. Amit Korach, a senior physician in the Department of Cardiothoracic Surgery at Hadassah Hospital at Ein Kerem; the couple has four sons.

“This Leadership and Commitment Award recognizes Pressman’s achievements in the coverage of the Middle East…and his professionalism,” said Sherryl Kaufman, president of Hadassah Southern New Jersey Region. “He has made numerous trips to the Middle East and enjoys the respect of world leaders.” Mark Roth, Associates national president, also spoke at the event.

Pressman began his broadcast career at WNBC Radio and later moved to television. He has won eight Emmys, as well as the prestigious Peabody Award and the Edward R. Murrow Award, both for his coverage of the plight of homeless people in New York. He is a former president of the New York Press Club, which represents broadcast and print media journalists.