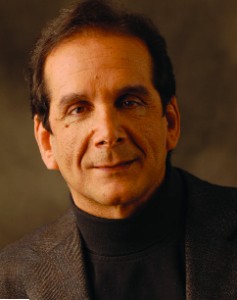 September 28. Charles Krauthammer, Pulitzer Prize-winning Washington Post columnist and contributor to Fox News, has been called “America’s most influential commentator” by the Financial Times. He writes frequently on foreign affairs, defense and terrorism.

Q. When do you think Iran crosses the red line in acquiring nuclear weapons capability?
A. The Baghdad talks were a complete failure despite all the hopeful scenarios leaked from the White House before the talks that they were going to come through with something. [The Western powers] face tremendous resistance from Iran. The Israelis are not going to stand around while Iran drags this out with America indefinitely. As I see it, there are two windows. If the Israelis calculate that [President] Obama is going to win in November, then they may decide that they have to strike when he’d be vulnerable. Let’s put it another way: They might think that they would have to strike when Obama would be constrained from strongly opposing and/or punishing them, and that would be before the election…. If, on the other hand, they believe he will lose, then they would more likely wait for a Republican president before deciding to attack.

Q. What do you think of President Obama’s statement that he has no intention of accepting a nuclear Iran?
A. I’m sure he would like to make sure Iran doesn’t weaponize. But the president of the United States liking, wanting or wishing counts for nothing. What counts is what you do. He was completely AWOL during the [2009] Iranian upheavals; if anything, he gave legitimacy to a regime that was in the midst of losing its legitimacy. He had this idea that he could sweet-talk his way through because of his brilliance, his knowledge of Islamic life [being raised in part in Indonesia] or that he would be able to have a special affinity with Muslims who would take on face value that he represents a new United States. The key thing to remember is not what Obama said but rather what the [director of National Intelligence] said in congressional hearings a few months ago. He said economic sanctions have had no effect on Iran’s nuclear program. Here we are…going into the real testing time, with the embargo in place, their banks being shut off. We’ll see if this is all serious, if it works. But I wouldn’t be surprised if Obama was already prepared for containment [of a nuclear Iran] instead of prevention.

Q. How do you see the outcome to the Syrian civil war?
A. The civil war is likely to drag out because the Alawites—a despised minority that has ruled the country with an iron hand—have nowhere to run. They will likely fight to the finish. In the end, I think Assad falls. The strategic benefit is high—Iran loses its major Arab client, but so is the risk of a Muslim Brotherhood takeover.

Q. What relationship does the United States have to Europe’s downspin?
A. The big story is already here: European governments gobble up 50 percent of GDP. In America, we are at 40 percent. We have more individual autonomy, fewer entitlements, less government cradling. Thirty years ago, we could have had a good theoretical argument over which model was better. But the argument is over. The Euro-model just doesn’t work, even if it is more desirable on paper. Even if it is more humane—although I would dispute that, but let’s assume all that is true—their system is insolvent and they don’t even have the burden of serious defense expenditure because they let us bear the burden. They have been free riders for 65 years now. All their resources go to social services—and they still can’t sustain it.

Q. Why can’t they make it work?
A. Herb Stein, who was Richard Nixon’s chairman of the Council of Economic Advisors, once said: “When something can’t go on, it won’t.” That is today’s story of Europe—it can’t go on and it’s not going to. This should be a big lesson to us. Will the Eurozone collapse? I don’t know. They’ll patch for a while, but finally a new government will arise in Greece or Spain or elsewhere and say to the Eurozone: “Screw you, we’re out of here. We’re not paying, so what are you going to do? Kick us out?” Then the Euro-powers will need to decide. That moment will come. And in the meantime, the real story is why in the world are we headed in that direction?

Isn’t it ironic that in 2008, we elected a president whose ideal was European social democracy—precisely at a point in history where that model began to implode?

Q. Shifting focus to Russia, can the country reconstitute as a leader?
A. Russia basically is a bunch of oil and gas wells with nuclear weapons and a high opinion of itself. It has nothing to attract the world. Nobody immigrates there, no patents or cutting-edge products come out of there. It’s reverted to being the old Russia. They extract natural resources, a lot of them, and that sustains them with very high oil prices. But it is a hollow, false kind of affluence.

Q. Does Putin sees himself as the head of a New Soviet Union more than the Old Russia?
A. He has declared openly that the greatest geopolitical tragedy of the 20th century was the dissolution of the Soviet Union—considering what happened in the 20th century, that is quite a perspective. He’s trying to reconstitute the Soviet space. But they don’t have a blue-water navy, they are trying to scratch themselves back to Syria to get naval facilities at the port of Tartus but they’re on the wrong side in that conflict, too. In short, they are not the great global power they once were. They never will be again. But they can be a very powerful regional force and they can be disruptive in the Middle East.

Q. What about Putin’s relationship with the United States?
A. Putin’s total lack of regard for American reaction shows the failure of the so-called U.S. reset policy. Reset is appeasement by another, more benign, name. We give them what they want—I assume the original thought was that Putin would help us on Iran—and they presumably would help us on nuclear proliferation. They proceeded to obstruct us on Iran all the way, vetoing, weakening, watering down resolutions, completing Iran’s nuclear reactor, doing everything possible to protect Iran. Clearly, they are repeating this exact approach now in Syria.

And what did we do? We strengthened Putin’s hand in Europe by canceling, in response to Russian threats, our previously negotiated missile defense agreements with Poland and the Czech Republic, making [the Central Europeans] wonder how much anyone can rely on the United States. We gave Russia accession to the [World Trade Organization]. And now their chief of staff says if we go ahead with even our reduced missile defenses, they are going to take them out physically. Our president called Putin to congratulate him for winning a phony election where every major candidate who could have been a serious opponent was not allowed to run and where the media were completely controlled. Obama has given away the store.

Thankfully, in the end, Russia will be unable to sustain itself as a great power. Putin will keep pretending for a while. He runs a KGB gangster state which will hold the reins at least for now. Russia will be a thorn in our side, but it will be no major threat.

Q. Here at home, which issue goes most sharply to the core of America?
A. To put it broadly, the very nature of the American experiment, the nature of the American social contract between citizen and state: How do we define the size, scope, reach and power of government? Every debate we have had, from Obamacare to the deficit to the stimulus—everything is related to a central issue. Is the federal government to be central to our lives?

The Obama campaign put out this little cartoon called “The Life of Julia,” which is online, of how Obama has helped Julia, a fictional woman, through her whole life. Each cartoon image demonstrates a certain piece of cradle-to-grave help from the state. It is an unconscious parody of the liberal worldview—the atomized citizen dependent at every stage on the government. In this world, Julia has no spouse, no relatives, no community, no social structure. There is nothing but Julia being helped through life by the state.