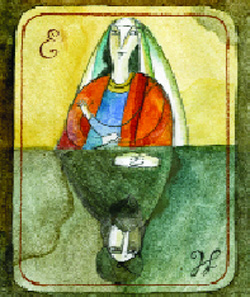 Shavuot, which celebrates the time we stood at Sinai, is associated first and foremost with hearing the Ten Commandments. But the Midrash brings a much more dramatic story: Astounded at the voice of God, the people fainted and fell back miles from the mountain. Angels rushed to their rescue and propped them up again. Staggering from the encounter, they managed to hear only the first two commandments.

The rabbis of the Midrash were pointing to an earth-shattering experience that is veiled in our text. At Sinai, we were asked to hold our human form, personality and all-too-human desires, while taking on a superhuman task—to become Divine emissaries, stretching to the fullest our capacities to be ethical, responsible, to act for God beyond what humans had ever done before. All this in the face of the greatest tests of suffering, ignominy and fragmentation of a people in human history.

Stretched to our full capacities and beyond, we can be proud that we as a people have persevered despite centuries of persecution—including attempts, from Haman to Hitler, to annihilate us. Yet each generation has its own call. Ours comes not in a barren desert or horrible suffering but in the midst of much comfort and pleasure. What is the demand of our times?

At Sinai, God told Moses, “Speak to the house of Jacob!” (Exodus 19:3). Rashi says this refers to the women, who were to be taught first.

In turn, we became the first teachers of Torah to our children. Yet our full potential has not been realized.

Thanks to the changes in women’s lives in the last two centuries due to technology and education, we have the chance to heed our call. Surely one of the most important changes of our times is the transformation of relations between men and women. In the private realm, couples are reexamining their relationships. We see around us the massive changes in women’s participation as public personae in the Western world. Even in countries where women are severely disadvantaged, there are signs of awakening. In Africa, women are speaking up against female circumcision; in Pakistan, thousands of women and girls rallied around teenager Malala Yousafzai, who was shot for daring to promote girls’ education.

Yet prejudices remain, and Jews are not immune from them. It is incredible that today, in Israel, a woman could be arrested for breaking protocol to don a talit at the Kotel, as was Anat Hoffman and others. Or that, in Seattle, a faction would secede from a community over the hiring of a woman to head a Jewish day school.

We must recognize yet again the staggering implications of the commandments we heard at Sinai—far more than their literal meaning. And we must hear them with women’s ears. They call us to make space for holiness in our lives and to the honoring of family. They also call us to uphold truth against a culture of lies, to protect everyone from robbery and violation and to curb our own jealousy, anger and hurtful behaviors.

In that spirit, let us commit this Shavuot (which begins on May 14) to hearing God’s voice for women—for those still struggling with basic liberation from real slavery, for those beginning to find economic and political empowerment and for those striving to transform our institutions and attitudes so the light of the Divine can shine in truly collaborative and inclusive societies around the world.

Tamar Frankiel, Ph.D., is president of the Academy for Jewish Religion, California, a transdenominational rabbinical, cantorial and chaplaincy school in Los Angeles. The author of numerous books and scholarly articles, she is the first Orthodox woman to lead a rabbinical school.