Cut & Post: Cookbooks, Prayerbooks and Israelis on the Road

Storied Feasts
Jewish folklore is rich with captivating tales that skillfully incorporate food as a major plot element. It is with food—and cooking—in mind that storyteller Jane Yolen and her daughter, Heidi Stemple, collaborated on Jewish Fairy Tale Feasts: A Literary Cookbook

(Crocodile Books), a delightful book filled with classic tales from across the diaspora and recipes to match. Yolen worked on the stories, Stemple the recipes.

There is the story, from Germany, of the demon bride living in a tree who exercises her powerful hold over the rabbi’s son, Levi, and who devours jam left for her by Levi’s true wife; a recipe for blintzes, topped with jam, accompanies it. “The Loaves in the Ark” weaves the story of Conversos newly relocated to Safed at the time of Rabbi Isaac Luria—Jews attempting to relearn their religion and who decide to try to please God by offering up halla loaves at the Ark every Sabbath; a halla recipe follows. Appropriately, a hamantaschen recipe is paired with “The Congregation that Loved Jam” and “How to Know a Noodle,” a Hershel Ostropolier tale, segues into a sweet noodle kugel recipe.

Sima Elizabeth Shefrin’s whimsical collage illustrations are a perfect visual interpretation of Yolen’s stories. This charming collection is a worthy addition to your family’s library, to be shared with children and grandchildren.
—Libby Barnea

Make the blintze “leaves,” which are very thin crepe-like pancakes:
1. Measure and combine all the batter ingredients and mix well with an electric mixer or in a blender. This can be done with a whisk, but it’s better when done by a machine.
2. Cover with plastic wrap and set aside to let the bubbles settle. The batter should be very thin.

Make the filling:
3. Measure and mix all the ingredients. (Cook’s hint: If using lemon zest instead of extract, use a zesting tool, very carefully so as not to cut yourself, to remove only the yellow part of the peel. The white part is called the pith and is sour.)
4. Cover the mixture with plastic wrap, and put it in the refrigerator.

Make the blintze leaves:
5. Pour a small amount of oil (vegetable or another cooking oil) into a medium-sized frying pan. (Cook’s hint: use a paper towel to spread the oil very thin before turning on the heat, and then rub the plates with the oily paper towel to keep the blintze leaves from sticking.)
6. Heat the pan to medium heat.
7. Pour a little less than a 1/4-cup of batter into the pan, and swirl the pan around until the batter covers the bottom with no holes. This will take some practice and the first leaf is usually pretty ugly.
8. When the edges start to peel up (about 30 seconds), use a spatula to gently turn the leaf in the pan and cook the second side for 20-30 seconds more.
9. With the help of the spatula, turn out the leaf onto the first plate.
10. Repeat steps 7-9 until you have used up all the batter.

Make the blintzes:
11. Take the top blintze leaf and move it to the second plate. Scoop a spoonful of the cheese mixture onto the leaf.
12. Fold 1/3 of the leaf from the bottom, over the cheese mixture. Fold in both sides, then roll top down into a totally closed pocket.
13. Set the filled blintze onto the third plate.
14. Repeat steps 11-13 until you have used up all the leaves and filling.
15. Preheat oven to 350.
16. Butter the bottom of a baking dish.
17. Melt 1-2 tablespoons of butter in a large frying pan at medium high heat, and gently place the blintzes (in batches so they don’t touch and so you have room to flip them) into the pan. Cook until golden brown on one side, then flip them to brown on the other side, about 2-3 minutes per side. Add more butter if needed.
18. Remove each blintze from the frying pan and place them side by side in the buttered baking dish.
19. Bake for 15 minutes.
20. Heat the fruit preserves in a small pan on low heat or in the microwave.
21. Top the blintzes with the warm preserves and sprinkle with powdered sugar.

Jewish Community Revival in Portugal
The first Jewish cultural and religious center in Portugal in more than 500 years will soon open its doors. Constructed and funded entirely by the city of Trancoso, the Isaac Cardoso Center for Jewish Interpretation will focus on outreach to the many Bnei Anousim who live in northeast Portugal. The center will also house a synagogue and an exhibition about Portuguese Jewish history.

Trancoso (was home to a flourishing Jewish community in the 14th and 15th centuries, prior to the expulsion and forced conversion of Portugal’s Jews. Cardoso, after whom the center is named, was a Jewish physician and philosopher born in Trancoso in 1603 to a family of Bnei Anousim (Conversos). 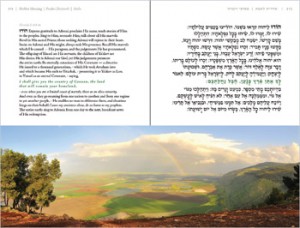 Prayerbook as Art Book
Moonscapes, sunsets, pictures of Holocaust survivors and the iconic image of David Ben-Gurion declaring the State of Israel don’t usually appear in a siddur.

But Nehalel beShabbat (www.nehalel.com; Israel Observer Publications), a new illustrated Shabbat prayerbook, incorporates stunning photographs that focus on the meanings of the liturgy.

Assembled from a variety of archives ranging from NASA to the Israel Government Press Office, the images found in the 650-page siddur highlight personal, national and universal themes: creation, redemption, humanity, Israel and Jerusalem. The traditional Shabbat text, accompanied by a new English translation, is modeled after Israel Observer Publications’s illustrated Nevarech bencher (Grace After Meals) and will be followed by volumes for weekday and holiday prayer.

Editor-writer and Jerusalem resident Michael Haruni says his favorite photos used in the siddur include a luminous starry sky, a close-up of two young men with numbers on their arms arriving at the Port of Haifa and Israeli soldiers receiving Bibles in a ceremony at the Kotel.
“Tefila [prayer],” says Haruni, “is as much about the present as the ancient past.” —R.M

Behind the Wheel in Israel
It may be time to revise Israeli drivers’ bad rap. Provisional figures for 2012 released by Israel’s Central Bureau of Statistics led Transportation Minister Yisrael Katz to announce recently that the number of people killed in road accidents was, at 290, the lowest in 50 years, despite a significant increase in cars on the road.

The CBS figures show not only a drop in the number of fatalities, but also in the total number of accidents.

Israel is not alone in improving its road record: The decline is part of an overall trend in developed countries, according to a 2010 report of the International Transport Forum at the Organization for Economic Cooperation and Development. Even so, Israel ranked fourth lowest, after the United Kingdom, Sweden and the Netherlands, in the number of road deaths per 100,000 people in 2009.

Despite Israel’s overall improvement, the CBS pointed out that in 2012 the number of accidents involving severe injuries rose in comparison to 2011. Israeli drivers still have a few things to learn.—Esther Hecht

Finding Meaning
A historical dictionary of the Hebrew language—in the making for almost 60 years—could soon be available online to the general public (it is already accessible to academics). Thirty lexicographers are laboring under the auspices of the Jerusalem-based Academy of the Hebrew Language (https://hebrew-academy.huji.ac.il) to complete the concordance, based on texts that are as much as 3,100 years old. The dictionary already has more than 20,000 entries.

The meaning of many Hebrew words has changed over time. For example, mal’akh meant “messenger” in the biblical period; when, in a later period, it came to mean “angel,” a new word for “messenger”—shaliah—had to be introduced.

Entries are organized according to the three- or four-consonant roots of Hebrew words. For example, under the entry for k t v one will find the Hebrew words for “write,” “dictate,” “letter,” “dictation” and more.

The first printed volume will be the letter tav. The full dictionary could take another generation. —E.H.