Commentary: No Zero in Survival 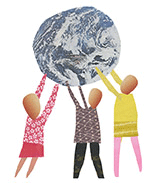 The angel of the Lord called to Abraham a second time…and said…I will bestow my blessing upon you and make your descendents as numerous as the stars of heaven and the sands of the seashore. —Genesis 22:15-17

As my press badge proclaimed, the occasion was a United Nations-sponsored “Drylands, Deserts and Desertification Conference” at the campus of Ben-Gurion University in Sde Boker. Passionate though I be about protecting Israel’s environment, how likely was it that I would rise before dawn to attend a session of a conference devoted to drylands?

My links to two participants drew me there that wintry morn: Mati Cones, an old friend receiving an international prize for lifetime achievement in desert architecture, and DDD’s keynote speaker, Stanford University’s Professor Paul Ehrlich. Ehrlich had figured significantly in my activist California past. Much impressed by his 1968 best seller, The Population Bomb, and having already brought forth our fair share of the planet’s carrying load, my wife and I had signed on with his movement espousing Zero Population Growth.

Fast-forward nearly a decade. Shortly after making aliya we were guests at the Shabbat table of a family on a moshav, our first Israeli way station. The hostess inquired about our family’s size.
“What you see is what you get.”

This intrusiveness struck us as more droll than irksome. In fact, we felt ourselves warming to this Israeli dispensation for self-indulgence on what was—who could deny it?—an overcrowded planet. Could an admittedly parochial but irresistible case be made for Pnina’s way?  In 1939, the world’s Jewish population fell short of 17 million. Today, we number fewer than 14 million. And demographers extrapolate that were it not for the Shoah, we would now be more than 30 million. And so, consigning our ZPG buttons to the memorabilia drawer, in time we gifted ourselves with another boy, then another girl.

At Sde Boker, Ehrlich’s presentation was labeled “Israel, Desertification and the Human Predicament.” Yet, over the course of an hour he made no allusion to Jewish exceptionalism or specific predicaments. Playing the crowd, the indefatigable elder statesman of sustainability annunciated his well-honed jeremiad of planetary woe: global land degradation, overpopulation, depletion of the world’s capital resources. Few scientists at Stanford gave mankind greater than a 10-percent chance of forestalling calamity.

Ehrlich saw Israel as a vastly overpopulated, super-consuming country. Already suffering severely from land depredation, it sits in the midst of an eco-mess of its own making and must deal without delay with an inevitable water crisis. True, he conceded, Israel has many fine scientists, but instead of standing in the forefront of solving the world’s urgent problems, it was turning into a theocracy. On other occasions, he had avouched that “true Zionists should have small families.”

In all fairness, Alon Tal, doyen of Israel’s green movement, has made much the same argument: Eventually, he has said, Israel’s pronatal and aliya policies will “make Israel ecologically barren and socially untenable.”

Both Ehrlich and Tal present a forceful case. Nevertheless, many Israelis consider it counterintuitive, at least for the present. We still find Pnina’s position more compelling because, retrofitted to post-Shoah exigencies, it proffers rewards for lifetime achievement in a generative, perhaps even redemptive key.

Hence, I close with a confession: My own tarnished ZPG button, which from time to time I fondly gaze at, has long espoused sustainability in a specifically Jewish key—Zionist Population Growth.