Inside Hadassah: Hard at Work, Here and in Israel 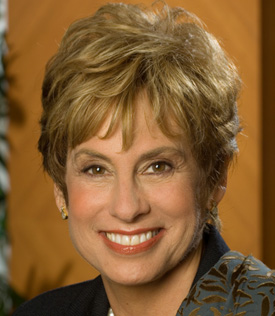 Most organizations would slow down at 100, but not Hadassah! We are as busy as ever, doing the century-plus work of Hadassah both here and in Israel. Over in Jerusalem, the neurosurgery and cardiothoracic intensive care units are among the latest departments to move into the new Sarah Wetsman Davidson Hospital Tower. And, closer to home, Hadassah Southern California hosted a women’s wellness day with a special emphasis on heart health for women, part of our Every Beat Counts initiative.

I wish you and your family a joyous, meaningful Passover. Hag sameah!

Towering Achievements
The neurosurgery and cardiacthoracic intensive care units have moved to their spacious, advanced quarters on the second floor of the Sarah Wetsman Davidson Hospital Tower. “The move was fast and efficient,” said Chief Nurse Naela Hayek, who will head both intensive care units. “Each patient has his or her own room, far better for preventing infection.”

And changes like having a computer and printer in each room to check medical history and mark blood samples contribute to the improved medical standards.

“We have cooling and heating systems—we used to use ice and blankets, but this is much better,” says Hayek, who worked in the General Recovery/ICU unit for 19 years before taking on her new role.

The 36-bed neurosurgery and cardiothoracic departments are now open on the ninth floor. Gila Ben-Shoshan serves as the head nurse of the two units and managed the move. For Ben-Shoshan, who formerly served as chief nurse of orthopedics, this was the second time she moved from the old building into the Tower. Orthopedics was one of the first departments to move last year.

“I was in a unique position to reassure the staff that the distances between rooms and new protocols would not be daunting,” said Ben-Shoshan, a graduate of the Hadassah–Hebrew University School of Nursing. “I had already experienced the ‘wow’ of the beauty and high standards of the tower, and believe me, it’s still ‘wow,’ but I knew how quickly we had caught on to new procedures and got used to working in such remarkable facilities. When we think back to the old building, and the difficult conditions, we know how necessary this move was and can’t thank the women of Hadassah enough in the name of the patients and the staff!

Heart News Out of Los Angeles
Over 250 Hadassah members and friends empowered their mind, boosted their bodies and soothed their soul at Hadassah’s Women’s Wellness Day on Sunday, February 9 at the University of California, Los Angeles’s Covel Commons. The morning keynote speaker was Dr. Kristi Funk, cofounder of the Pink Lotus Breast Center, who has helped thousands of women through breast cancer treatments, including singer Sheryl Crow and actor Angelina Jolie. The lunchtime keynote speaker was Dr. C. Noel Biarey Merz, director of the Barbra Streisand Women’s Heart Center at Cedars-Sinai Medical Center in Los Angeles, who is a world-renowned expert on women and heart disease.

The goal of the program was to educate and build awareness with a special emphasis on heart health. Hadassah’s Every Beat Counts campaign aims to educate women in the United States and Israel about heart disease. Furthermore, Hadassah Medical Organization and Cedars–Sinai were two of five medical institutions that received $10-million grants from philanthropist and health advocate Irene Pollin to open Linda Joy Pollin heart wellness centers.

Meet the Veep: Kathy Hershfield
Kathy Hershfield cherishes the photo of her mother, Sue Seigel, boarding a plane to a Hadassah meeting. Her mother demonstrated a commitment not only to Hadassah but to all things Jewish and Zionist. In a time of “men-only synagogue leadership,” she became the first female president of her synagogue. At age 29, Hershfield lost her mother. Emulating her, Hershfield became the dynamic leader she is today.

It was a Hadassah young women’s mission to Israel that opened Hershfield’s eyes to Hadassah’s accomplishments in building the Jewish state. “I love strong women and women who are doers,” she says. ”They touch the world, accept massive challenges and make changes.”

Today, as a national vice president, Hershfield sits on the Executive Committee and is currently the National Founders cochair. She knows that people want to give a gift to Hadassah that resonates with their own interests and makes an impact.

Like her mother, Hershfield, who lives in Sharon, Massachusetts, advocates for Jews in America and Israel through two organizations. Representing the Anti-Defamation League, she visits public schools and Hebrew schools, leading workshops on anti-bias, anti-prejudice and anti-Semitism.

With her husband, Ed, and their children, Alyssa and Matthew, the Hershfields are members of the Society of Major Donors. —Sandra King

Commonwealth of Hadassah
Puerto Rico has been a vibrant chapter of Hadassah in San Juan since it was founded 60 years ago by Rosita Kaufman Chapman, coowner of the New York Department Store. Her friends Inez Mendoza and Governor Luis Munoz Marin, known as the father of the Commonwealth of Puerto Rico, participated in some of the first events ever sponsored by Hadassah on the island. Chapman epitomized the Hadassah woman: a full-time working mother raising three children while fundraising for Hadassah and advocating for the community.

Today, Hadassah Puerto Rico maintains the same goals. Over the years, it has been responsible for projects including the primary funding of the liver unit at Hadassah–Hebrew University Medical Center at Ein Kerem and the children’s liver unit in the hospital’s Mother and Child Pavilion. Recently, their efforts have focused on the Center of Emergency Medicine and the Sarah Wetsman Davidson Hospital Tower. Many Hadassah national presidents, CEOs and doctors have visited the group over the years. Approximately 75 percent of the Jewish families in Puerto Rico are members of the chapter, whose multinational members represent the United States, Puerto Rico, Cuba, South America and Israel.

Visiting Hadassah members who would like to participate in chapter events can contact the chapter by phone at 787-398-6969. They can also e-mail Hadassah Puerto Rico President Moira Taubenfeld at moira916@gmail.com.

Hadassah History on Display
Volunteer guide Dvir Mosai leans forward on his cane and points to the lower half of the map of Israel on the wall of the Albert and Ethel Herzstein Hadassah Heritage Center. Dozens of lights mark sites where Hadassah set up clinics. “Even before Prime Minister David Ben-Gurion declared his dream of settling the Negev,” explains Mosai, “the women of Hadassah were providing medical care there.”

Mosai, now 25, was a teen on a class trip picking cherries when he stepped on a land mine planted by a terrorist. He has undergone more than 30 operations at the Hadassah–Hebrew University Medical Center at Ein Kerem. He is married with a small son.

Adi Huja, 24, was standing near a terrorist who blew himself up on Ben Yehuda Street in 2001, murdering 11 young people. She was the most seriously injured of the survivors and has undergone as many operations at Hadassah Hospital as Mosai. Huja had come to the hospital that day to personally deliver wedding invitations to doctors and friends. She and Mosai know each other from rehabilitation at the Hadassah–University Hospital on Mount Scopus and today they have met up in the Heritage Center. Talk about living history.

The Heritage Center is the new interactive living history museum bringing to life Hadassah, the Women’s Zionist Organization of America, past and future. It occupies a suite of rooms linking the Sarah Wetsman Davidson Hospital Tower with the Chagall Windows, near the new rotunda. The concept and content were created by Hadassah’s Office in Israel trio: Audrey Shimron, Barbara Goldstein and Barbara Sofer, who isolated themselves to brainstorm, research and write the material. The design for the 1,300-square-foot center was created by Jerusalem architect and artist David Shapira. At the center dedication at Hadassah’s Centennial in 2012, Heritage Center Chair Bonnie Lipton said, “I look at those who have led us, whose stories are here, and I am almost speechless. Working on the Heritage Center in this building is beyond fulfillment. The center will grow to reflect our changing history.”

Indeed, with the generous support of the Herzstein Foundation, the Heritage Center provides dynamic multimedia expression to the rich and dramatic history of Hadassah’s accomplishments and future directions. Making use of the most advanced interactive, multimedia techniques, visitors are able to discover and explore, tailoring the visit to their own pace and interests.

“Many of the visitors are patients or staff members,” says Mosai. “No matter how much they know about Hadassah, they are stunned by the scope of the legacy. I tell them about the seeds planted so long ago that have blossomed into the fruits we enjoy today.”

Chief volunteer guide Diane Schneider, who worked in the United States Senate before making aliya, said that many of the visitors bring their own Hadassah stories. “One woman cried at the memorial exhibit for the 78 men and women murdered in the Hadassah convoy in 1948. Her cousin was among them,” Schneider related. “Another took special interest in the Youth Aliyah story because he had come on Youth Aliyah. Still another visitor found a picture of her mother among the women of the first study group.” Schneider keeps a log of all the stories.

At the heart of the Heritage Center stands a sculpture of the symbol of Hadassah: a six-pointed Star of David with the message from the Prophet Jeremiah: “The Healing of the Daughter of My People.” The sculpture also provides exhibit space for outstanding Hadassah artifacts, such as Henrietta Szold’s personal diary.

Some visitors ask Mosai about his personal connection to Hadassah. He recalls the months he spent in what is now called the “old building” and how amazing the “new Tower” is for patients. Says Mosai, “I tell them that Hadassah saved my life several times and it’s time for me to give back.”