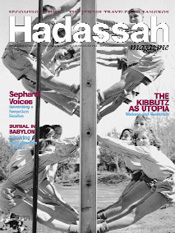 Israel Media Bias?
I am writing in regards to the February/March interview of New York Times Jerusalem Bureau Chief Jodi Rudoren. Rudoren held herself out to be an exemplar of even-handedness in reporting on the Israeli-Palestinian conflict. She is convinced that because she receives negative press from each side, she is admirably unbiased.

The general flaw in this logic is that the two sides are not morally equivalent. When one adopts positions partway between those of a peace-seeking democracy (Israel) and those of an entity that glorifies and pursues terrorist murders of innocent Israeli civilians (the Palestinian Authority) one is not engaging in even-handedness. One is rather engaging in moral relativism, appeasing and enabling lethal violence against innocent civilians.

It would have been more informative if Rudoren had been asked probing questions about her journalistic practices instead of being promoted in what amounted to a complimentary advertisement.

A Few Facts
Regarding the book review of My Promised Land by Ari Shavit (February/ March issue), in his extensive narrative of the “debacle” or the “catastrophe” of the Palestinians—Shavit’s own words—the author failed to mention a few historical facts essential to the complete picture.

On November 29, 1947, the Arab League delegation at the United Nations General Assembly voted against the partition plan that would have created an Arab state in Palestine (“We shall erase this plan in rivers of blood”—the infamous words of Jamal Husseini, secretary general of the Arab League). What is less known, perhaps, is that there was no Palestinian Arab representative at that vote. What a bitter irony: The Palestinian Arabs had no voice in the decision about their own proposed state.

Three generations (and counting) after these events, it is imperative to paint a complete picture.

Fond Memory
I was pleased to read your profile on Nathan and Alyza Lewin in the February/March issue.

Forty years ago, I was a student in Nathan Lewin’s Individual Rights and Liberties class at Georgetown University Law Center in Washington, D.C.

Over the years, I have always fondly remembered two aspects of Nathan Lewin that distinguished him and his class. While all classes revolved around casebooks, Lewin was the sole teacher who would come to class with a stack of additional books from which he gave depth to our lessons. When we were approaching finals, he said that he had told the registrar that he could give finals any day other than Saturday. Perhaps not surprisingly, the final was scheduled for Saturday. Lewin asked students if any other day would be acceptable. Predictably, the class said no. Adhering to his principles, and respecting the students’ honor, he gave us a take-home, open-book final.

In “The President’s Column” in the April/May issue, the reference to Miriam playing her timbrel to lead the Jewish people to the far shore of the Red Sea was incorrectly attributed to the Haggada. That passage comes from the Book of Exodus.