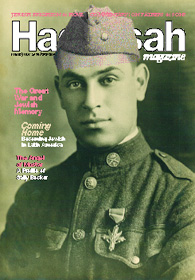 Jewish Service
Thank you for David Laskin’s “The Great War and Jewish Memory” in the June/July issue, about Jews who served on both sides in World War I. My grandfather, an ob-gyn in Frankfurt, joined the Kaiser’s medical corps in 1914 and died, still in uniform, shortly after the war ended.

Because my father and his siblings were war orphans, they got access to the best schools—where Jews tended not to be admitted. But, by 1933, my father was fleeing his own medical education as the Nazis kicked Jews out of universities. In 1934, he and his siblings left for the United States and eventually joined the American war effort against the country of their birth.
Anna Fleck Jacobs Singer
Tuscaloosa, AL

Congratulations on the wonderful article by David Laskin. While this feature was on World War I, I want to tell your readers how different things are today for Jews in the armed forces.

I served in the United States Air Force from 1968 to 1998 and never experienced nor observed anti-Semitism. As a volunteer lay leader on many bases, the military gave us use of base chapels in which I led Friday night services. At the U.S. Air Force Academy and the U.S. Naval Base at Pearl Harbor, we had our own Jewish chapel and full-time rabbi. Not all facilities were robust: When I was posted at Misawa Air Base in Japan, near Siberia, I played a record of Jan Peerce’s Kol Nidrei for the Yom Kippur service.

We have come a long way in 100 years and I am very proud of being Jewish and an American veteran.
Marvin Feldman
colonel, USAF, retired
Jacksonville, FL

Precious Memory
It was with great joy that I read the Adin Steinsaltz interview regarding his book, My Rebbe, in the June/July issue. During Shavuot 1980, I visited Chabad headquarters in Brooklyn. The weekend became etched in my memory: meeting the wonderful wives of Chabad emissaries; the Shavuot service sitting in the women’s balcony of the legendary 770 Eastern Parkway synagogue; and, most of all, the afternoon when that synagogue belonged to us women, listening to the words of wisdom of the legendary Lubavitcher Rebbe. A precious memory I will always cherish.
Rachel Kapen
West Bloomfield, MI

Jamaican Identity
I was excited to see the article “Swimming Against the Tide” in the April/ May issue, as I had been to Jamaica to work and visited the synagogue and got a tour by Ainsley Cohen Henriques. Yet when I looked at the cover I was appalled at how a Jamaican was depicted. I see this drawing as racist and a very narrow perspective of who a Jamaican is. As if you were showing one small part of the population, keeping us believing that Jamaicans walk barefoot and carry their wares on their head. This picture is so far removed from who I know and met.
Rabbi Tzipi Radonsky
Port Royal, SC

Editor’s Note
The cover image, titled Milkwoman and coming from a series of lithographs by Isaac Mendes Belisario called “Sketches of Character in Illustration of the Habits, Occupation, and Costume of the Negro Population in the Island of Jamaica,” hangs in the National Gallery of Jamaica. The image was created in 1837-1838. The series was a landmark event for both Jamaican and British publishing. After independence in 1962, Belisario’s images played a role in the creation of a new national identity.