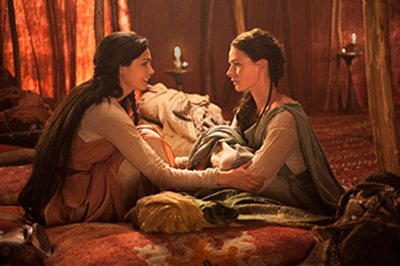 Remember when Anita Diamant’s novel The Red Tent (Picador) was all the rage? It started in 1997, when Diamant created a world populated by our biblical ancestors—especially our foremothers—and described their experiences of love and loss, betrayal and survival, told through the eyes of Dinah, daughter of Leah and Jacob. To date, millions of copies of The Red Tent have been sold and the book has been translated into 28 languages. (Diamant’s latest novel, The Boston Girl, published recently by Scribner, looks back at a young Jewish girl growing up in early 20th-century America.)

Well, now you can see The Red Tent in its latest incarnation: a miniseries on Lifetime television starring Minnie Driver, Morena Baccarin, Rebecca Ferguson and Debra Winger. As expected, a red tent plays a central role for the women of a tribe that grew and matured in the wilderness. When the women gather in the tent, it becomes both school, salon and, sometimes, refuge. The film reveals both the innate intelligence and independence of Rachel, Leah and Dinah, includes an abundance of romantic and passionate love scenes as well as calculated and devastating violence.

Produced by Sony Pictures Television, the two-night event unfolds over December 7 and 8, beginning each night at 9 P.M.

Q. Why did you choose Dinah as the pivotal character?
A. Dinah’s silence drew me to her. In Genesis 34, Dinah’s experience is described as a rape by the men in her family, and in that historical period, she would have been ruined, unmarriageable, socially doomed. Because she does not say a word and also because of the extraordinary actions taken by her accused assailant, it wasn’t hard to imagine an alternative telling, in which Dinah is not a passive victim but a young woman who makes choices and acts on her own initiative.

Q. Why do you think The Red Tent was read so voraciously and widely? Why does it have so much staying power?
A. Women connect to the book in so many ways and for so many reasons. At its core it affirms the value of women’s work and wisdom as well as women’s physical strength and fortitude. The Red Tent honors the importance of women’s relationships within families and also within friendships. And because it gives a voice to some of the women in the Bible, that creates a personal point of access to scripture for Jewish and Christian women—and men for that matter. Love, family, coming of age, trying to control one’s fertility, constraints on their freedom—these are truly timeless subjects. The staying power of the book is due to reader recommendations, book group to book group, friend to friend, mother to daughter, daughter to mother.

Q. Has the meaning of the story changed over the years? Basically, Dinah and her mothers are portrayed as wise, talented, supportive and strong women. Do we still need to send that message in 2014.
A. Alas, the message that women are wise, talented, supportive and strong still runs counter to the culture we live in, where one out of every six Americans will be the victim of rape or attempted rape, where women’s friendships are trivialized (“frenemies?”), where equal pay for equal work is still a slogan rather than a reality. In many parts of the world, girls are murdered for learning how to read, sold into sexual slavery and physically damaged by too many pregnancies. I would say that the message remains urgent.

Q. Is the series faithful to your book?
A. It’s a funny question since I still get criticism about the book not being “faithful” to the Bible. When Lifetime purchased the rights, I knew the film adaptation would be very different from the book because in a visual medium you have to show rather than tell. There are many differences between book and movie, but the series is faithful to The Red Tent in what I consider the most important way—it honors women’s work, courage and ingenuity and it celebrates women’s relationships with one another.