The Elephant in the Synagogue 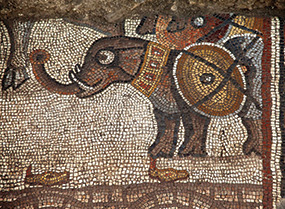 The first ancient synagogue mosaic depicting a nonbiblical story has been uncovered in Huqoq, in Lower Galilee, after two unusual mosaics depicting biblical stories from the life of Samson were found there.

According to Professor Jodi Magness of the University of North Carolina, the codirector of the ongoing dig, the third mosaic in the fifth-century C.E. synagogue includes a depiction of two large male figures: One is a Greek military commander and ruler leading a large bull, soldiers and battle elephants. The other figure holds a scroll and near him are male figures holding weapons.

Because the Hebrew Bible has no stories involving elephants, the mosaic “depicts a nonbiblical story,” Magness said. Under consideration are the meeting between Alexander the Great and the Jewish high priest (a legend found in first-century historian Flavius Josephus and rabbinic literature) or a story based on Maccabean martyrdom traditions.

The mosaics suggest that the Jewish villagers in Huqoq were very prosperous, Magness added, but that they were “looking forward to a messianic era, led by a warrior-redeemer figure modeled after Samson.”