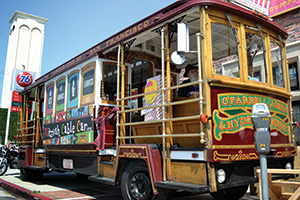 The only stop is at the Jewish Community Cen­­ter, the oldest JCC west of the Mississippi. Operated by Chabad of San Francisco, the tour requires a mitzva plus the $28 fare, and Rabbi Moshe Langer circulates to collect promises. And bring a cushion and a sweater, those wooden benches can be chilly if you sit outside.