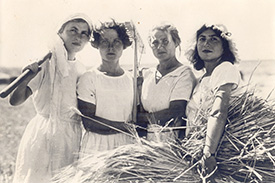 The Dove Flyer
The trauma of exile is not new to Jews, but it’s hard to grasp the shock and pain of being forced from a land you have called home for nearly 2,500 years. The documentary captures the angst, fury and divisions within the community of 130,000 Iraqi Jews condemned to flee beginning in the 1930s through the 1970s what many considered to be their homeland. Israeli Films. —Judith Gelman Myers