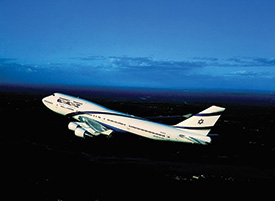 Because of its codeshare partnership with JetBlue, El Al passengers debarking in Boston can easily transfer to flights leaving Logan aboard JetBlue planes.

Massachusetts and Israel each play home to startups as well as established leaders in high technology, biotechnology, life sciences and other research fields. Travel between the two high-tech metropolises is already common—and was the main inspiration for El Al President and CEO David Maimon and then-Massachusetts Governor Deval Patrick to push for the new air route.