Drops of Water in Senegal 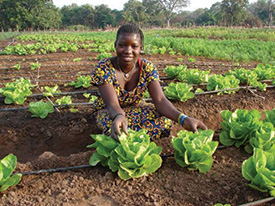 Women farmers in drought-stricken Senegal have new hope for feeding and supporting their families, thanks to an initiative of Mashav, Israel’s Agency for International Development Cooperation. Perhaps as important, their daughters, who until now had to stay home and help farm, are now free to go to school.

The program, called TIPA (“drop” in Hebrew), provides drip irrigation, a mix of crops, a management package and agricultural guidance by local experts. Drip irrigation cuts labor, produces larger and higher-quality crops and maintains soil productivity. Nearly all the farming in Senegal—a large Muslim country—is on small farms, and 75 percent of the smallholder farmers are women.

“The idea is to help them move from subsistence farming, in which everything is lost in a drought, to commercial farming,” said Ilan Fluss, deputy director of Mashav.

What began in 2006 as a pilot program in 12 communities is now being adopted in 70, with the support of Italy and the Senegalese government, and will directly benefit some 10,000 people.

“The basis is Israeli technology,” Fluss said, “but the solution is local.”