The Other Side of the Curtain

A Haggada with Hebrew, Russian and English translations is one of many artifacts featured alongside photos and quotes from Soviet Jewish refugees in an exhibition that examines community efforts in the late-20th-century to resettle Jews from the former Soviet Union into new lives in Richmond, Virginia. Through December 15 at Beth Ahabah Museum and Archives in Richmond. —Anne Dreyfuss 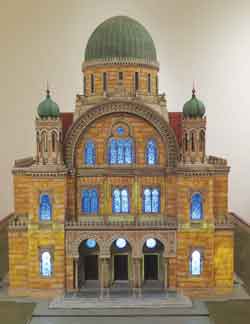 Modeling the Synagogue: From Dura to Touro

The 10 intricate scale models of historic synagogues on display were designed by leading scholars and historians in 1973. The magnificent architectural details and materials closely resemble the original structures: authentic-looking windows and lamps that reveal the vast geographic Jewish world across the centuries and continents.