Sarona. The name pops up casually and often in conversations in Israel these days, as in “Adidas opened a branch in Sarona” or “We tried a wonderful Beaujolais at that wine bar in Sarona.” Most often, though, the refrain is simply: “Have you been to Sarona yet?” 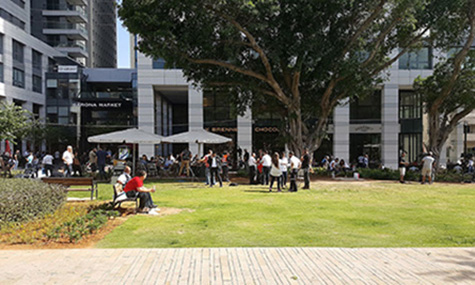 Since the outdoor complex of shops, restaurants and galleries opposite Tel Aviv’s Azrieli Towers opened in stages, beginning in the spring of 2014, Sarona is fast overtaking the Tel Aviv Port as the place to be.

There is no dearth of chic shopping venues in the city, but few can match Sarona for the dramas that have unfolded in this 47-acre space in the course of its implausible 150-year history. Add to that a charming, painstakingly restored façade that belies its darker chapters, one of which I was intimately familiar with growing up far away in Canada.

The red-roofed, two-story stone houses that lend Sarona its quaintness were built in 1871 by the German Templers, a breakaway group of messianic Protestants who set up colonies in Jerusalem, Haifa and other parts of the Holy Land. In what later became Tel Aviv, they established the agricultural colony of Sarona that was to become the first to market oranges under the Jaffa label. (The colony’s name was inspired by the biblical reference to the Rose of Sharone but, in the Lutheran source the Templers relied on, it was written Sarone, which became Sarona.)

With the rise of Hitler, some Sarona residents became Nazi sympathizers. In a particularly ironic turn of events, the swastika flag was hoisted in the heart of Tel Aviv. It fluttered atop the Templers’ first community hall, Beit Hava’ad—now a hamburger joint—for seven years. (In 1943, members of Etzel, a prestate Jewish underground, planted a bomb next to the building in a foiled effort to assassinate Templers.)

With the outbreak of World War II, the British Mandatory authorities declared the Templers enemy nationals. The British eventually deported Sarona’s residents to Germany and Australia, bringing an end to their seven decades of life in the Holy Land.

In my mind, though, Sarona was not a Templer colony or a potpourri of shops and cafés, but rather the name of a menacing British army garrison that my father would describe in his tales of growing up in Mandate Palestine.

“A British patrol left Sarona,” my father would begin as I sat at the edge of the bed on a lazy Saturday morning back in our home in Montreal, pumping him for more details of the story he was reluctant to tell.

Years later, on a visit to Israel, he would point to the tiny structures—that looked, from the heights of the Azrieli Towers observatory, like bright-red plastic Monopoly houses—and remark, “That’s it, that’s Sarona.” He stared at the innocuous looking toy cottages for a while, then walked briskly to another window.

The British established their military headquarters at Sarona in 1945, after the last of the Templers had been deported. From there, they coordinated intelligence and sent out forces to stop the members of the prestate undergrounds from smuggling Jewish refugees from Europe into the yishuv—in what was a cat-and-mouse game. One night, my father was the mouse. 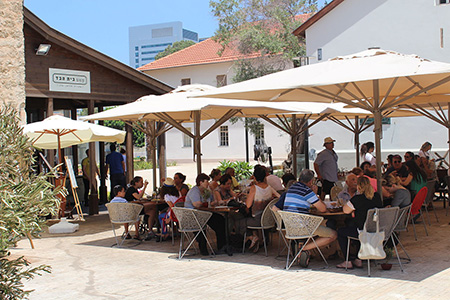 His mission was to block the movement of British armored vehicles from Sarona, preventing them from reaching the nearby beach where 248 illegal immigrants, Jewish refugees from Europe, were due to disembark from a ship called the Wingate.

There was a curfew in Tel Aviv that night in March 1946 when he and three other Palmah fighters took their positions on a small street not far from the Sarona garrison. No one in-formed them that the refugee ship had been discovered at sea and the mission aborted.

“When we heard a British armored vehicle coming from Sarona, we crept onto a balcony of a house to seek cover,” my father recalled.

As they crouched, floodlights lit up the whole balcony. Then the patrol disappeared down the street. “We didn’t know whether we had been spotted or not,” he said.

A few minutes later, the answer came in the form of reinforcements from Sarona. A shot was fired from the balcony, the bullet grazing the ear of a British sergeant who had been approaching the hideout. The balcony was sprayed with automatic gunfire from several armored vehicles for 20 minutes nonstop.

There was an attempt at surrender, more automatic fire, shots from the balcony. By the time the shooting was over, a young Jewish woman who had emigrated from Germany—the commander of the squad, Bracha Fuld—had been fatally shot.

The British took her to police headquarters to be interrogated rather than to a hospital. (“They let her bleed to death,” my father recounted.) The three other Palmah fighters—one of them shot in the hand when he tried to surrender—were arrested and tried in a British military court. My father, who was 18 at the time, was sentenced to 14 years in prison.

From March 1946 until independence in May 1948, he was carted from prison to prison, from Jerusalem to Akko. He narrowly survived jail riots and, from his cell next to the gallows, heard the last defiant words uttered by less fortunate friends.

Perhaps it is no wonder that after the British withdrew from Palestine, David Ben-Gurion swiftly renamed Sarona, which became the headquarters of various government ministries and the Israel Defense Forces. Ha-Kirya (the compound) is how generations of Israelis know the warren of dilapidated buildings along Kaplan Street.

It was as though, in burying the name, the leader of the nascent Jewish state had hoped to purge the painful history of the place where Germans had unfurled the swastika flag and British soldiers had killed Jews fighting for a state.

Decades later, the neighborhood was renovated—thanks to the outcry of preservationists who were alarmed at plans to raze it to make way for high-rises. And not only were the Templer buildings painstakingly restored, but so was the name that Ben-Gurion had tried to erase.

Today, Sarona has lost its dark edge and become a place to spend a leisurely hour or two, in a wine bar or a Tommy Hilfiger shop.

As I stroll through the cobblestone lanes of Tel Aviv’s newest lifestyle hub, past eye-popping galleries, designer clothing boutiques, crowds lined up to get into swanky restaurants and jazz musicians performing on the lawn, I probably look like so many other wide-eyed sightseers charmed by the infectious ambience of the place. But in truth I feel a bit like Sarona itself.

Under my carefree façade lurks a heavy heart etched with a darker scene, in which a woman dies much too soon and a young man’s adolescence ends abruptly.